Watch our Hands-On reviews of both of these units below…

Or click here to read the Prime 2 review, or here for the Prime Go review.

Denon DJ just announced two new Prime all-in-one standalone systems: the Prime 2 and Prime Go. Both are smaller than the previous Prime 4 system released in 2019, featuring a new 7″ HD touchscreen and more portable enclosures, but sharing Denon DJ’s Engine OS. This means they are capable of analysing and playing music from USB, working with libraries from rival system Rekordbox, and incorporating streaming services over WiFi. 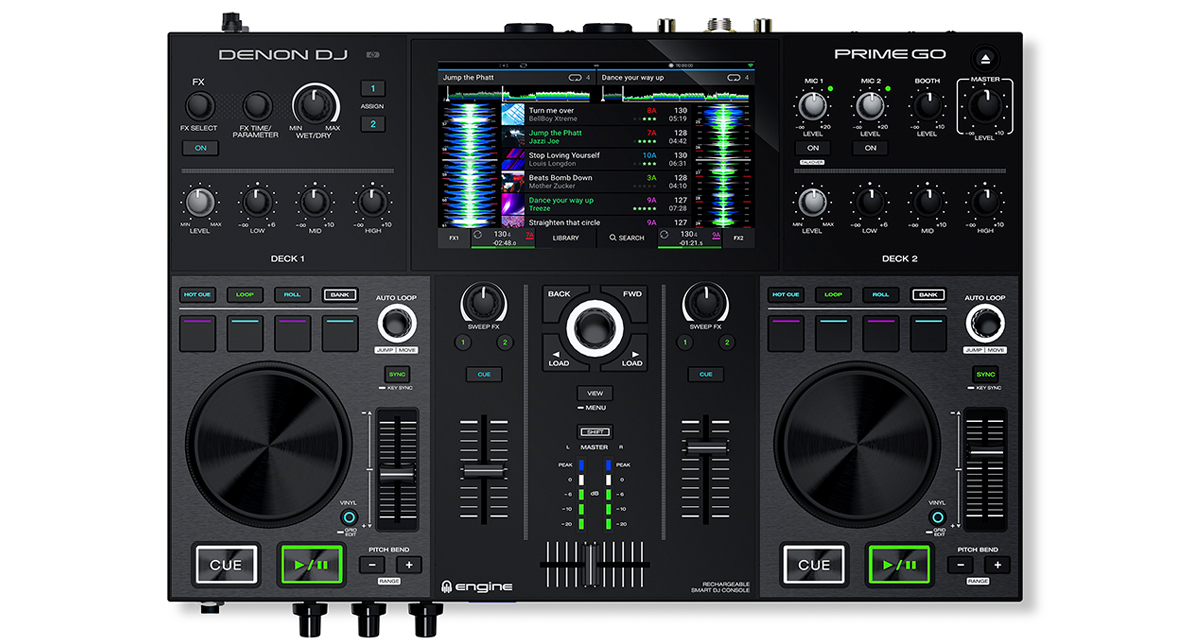 The Prime Go is a portable two-channel all-in-one device that’s got a 7″ touchscreen display and can be run from an internal rechargeable battery – Denon DJ says you get up to four hours of spinning on a single full charge. It’s got two decks, with each deck having four performance pads with three pad modes (Hot Cue, Loop, and Roll), transport controls, pitch faders, looping controls, and Denon DJ’s pitch bend buttons. Above the decks are knobs for volume and EQ (low, mid and high).

On the top left of the unit is the FX section consisting of FX Select, FX Time and Wet/Dry knobs, plus two FX assign buttons. You’re able to view which effects are available using the onboard display. On the top right of the unit are two microphone volume knobs, and the booth and master output knobs.

Round the back are XLR and RCA master outputs, 1/4″ booth outputs, Aux inputs and two combo mic jacks. You also get two USB jacks (one for a thumb drive and one for your laptop), an Ethernet Link port, power socket and power button.

Finally, the front of the unit has an SD card slot, 1/4″ and 1/8″ headphone jacks, cue mix and headphone volume knobs, and an aux output knob.

The Prime 2 is a two-channel standalone device that has the same layout as the Prime 4, though this time you get a smaller 7″ touchscreen display (the Prime 4 had a 10″ display) along with a more compact body. That said, you still get the same deck sections (jogwheel size and centre display, performance pads and pad modes, looping and transport controls).

You also have three-band EQs with filter knobs (instead of Sweep FX found on the Prime 4), two mic channels, FX sections at the top of each deck, browse and load controls, and SD and USB jacks on the face of the units which you can use to record your sets.

Round the back are XLR master and booth outputs, RCA master outputs, RCA aux inputs, two combo mic inputs, three USB jacks (two for thumb drives and one for your laptop), an Ethernet Link port, and a power socket. In front are 1/4″ and 1/8″ headphone jacks, crossfader assignment switches for both channels, and a crossfader curve knob. Underneath is a SATA HDD bay for installing a hard drive.

While the flagship Prime 4 is an absolute beast for mobile and gigging pros, it’s not for all DJs: apart from the price, some of the features may be overkill for the casual DJ who is just getting serious about DJing and wants something he or she can spin with on weekends or take to gigs and parties. The Prime Go and Prime 2 are aimed at those folk. 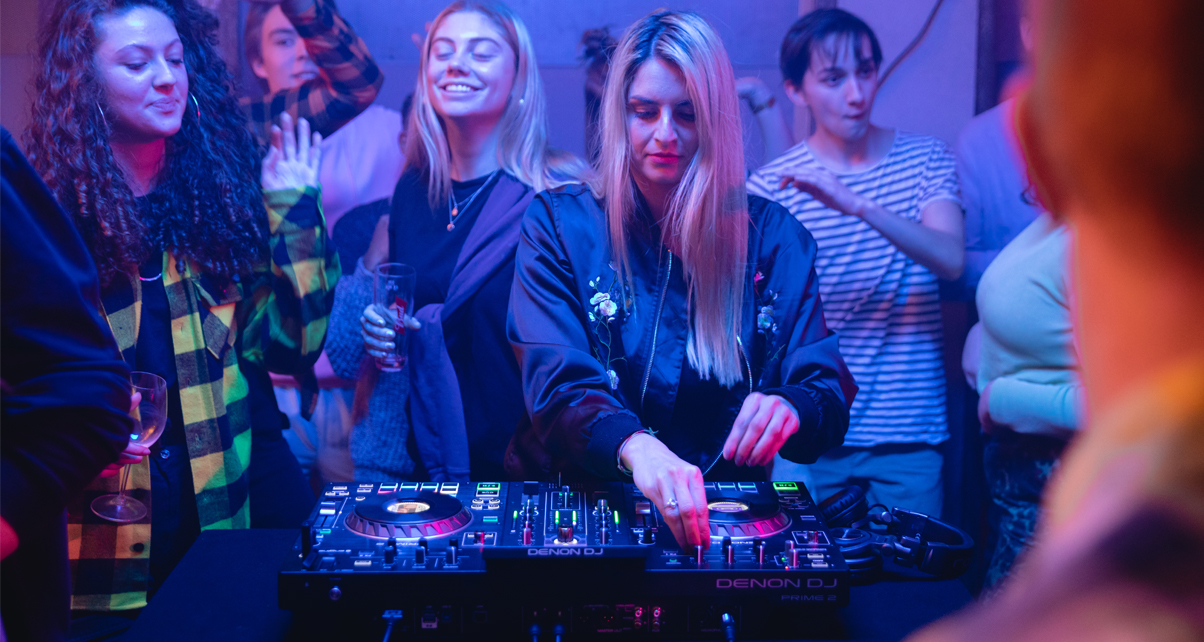 The Prime 2 is for DJs who want the power and performance of the Prime 4, but don’t need the four-channel capability and large touchscreen. It looks like a solid device for both home and gig use. The Prime Go is also interesting for club DJs who spin on Denon DJ Prime Series gear because that means they can prep their sets on the Prime Go whenever, wherever. 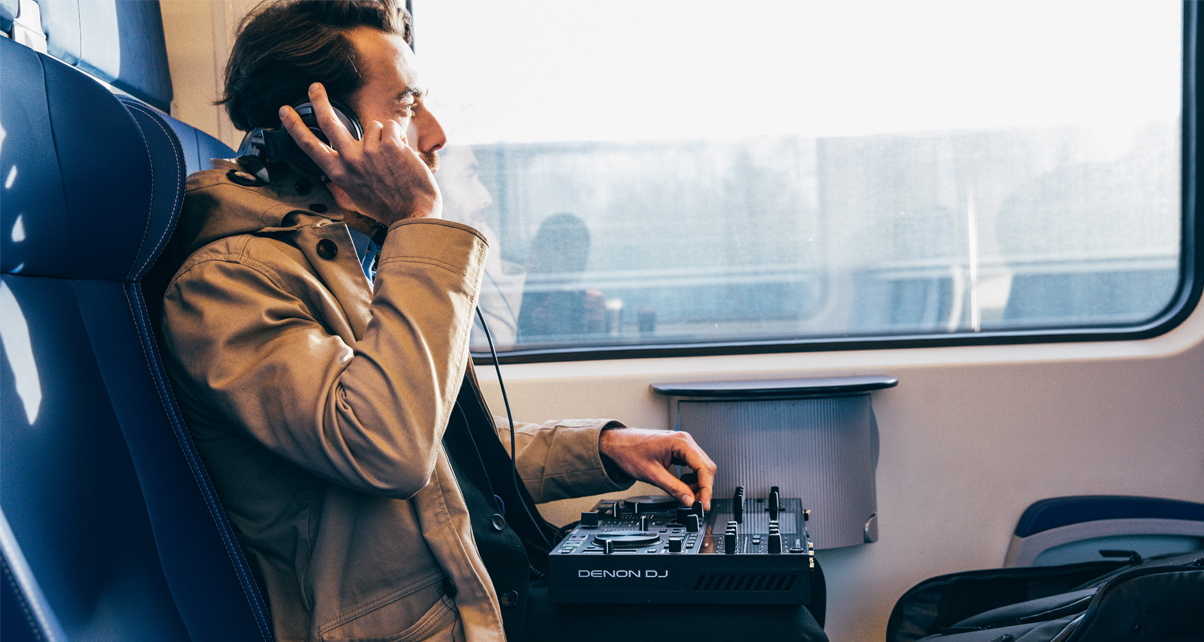 We absolutely love the idea that you’re able to spin, manage your library, and edit playlists all from a single device with a modern touchscreen.

Check out the promo videos and photo galleries below. 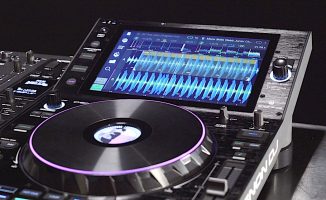 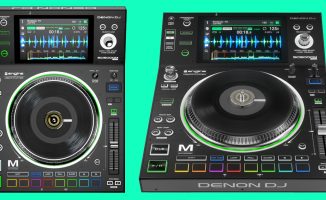 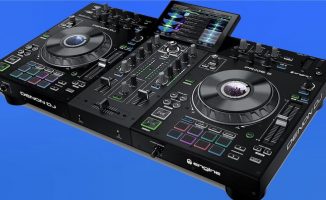 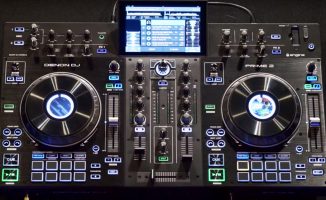