As ever there was lots of gear we spotted, filmed and chatted to manufacturers about that we didn’t have room to write about individually over the time we were at the NAMM Show, so today’s post is our traditional bumper roundup of those products. From mixers to lights, bags to the plain bizarre, it’s all here!

NAMM best of the Rest 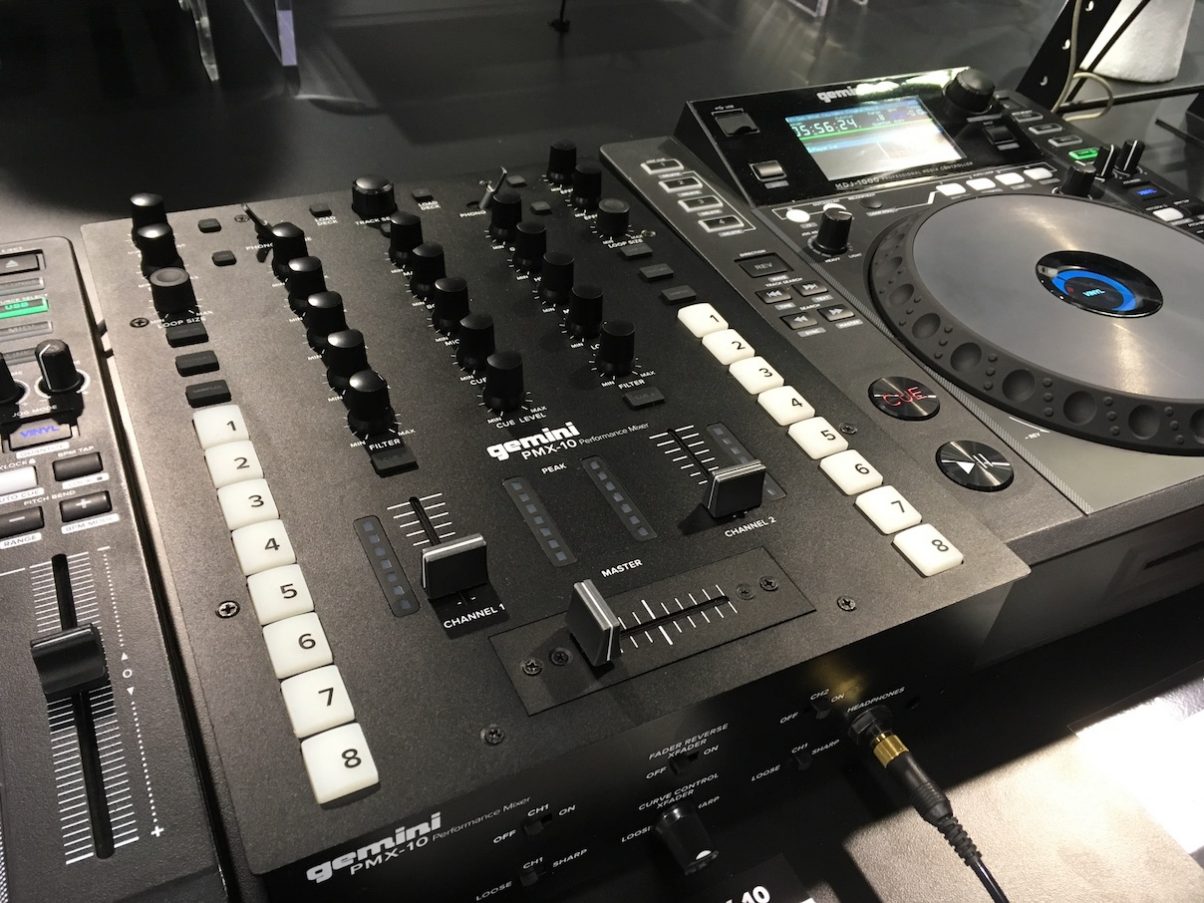 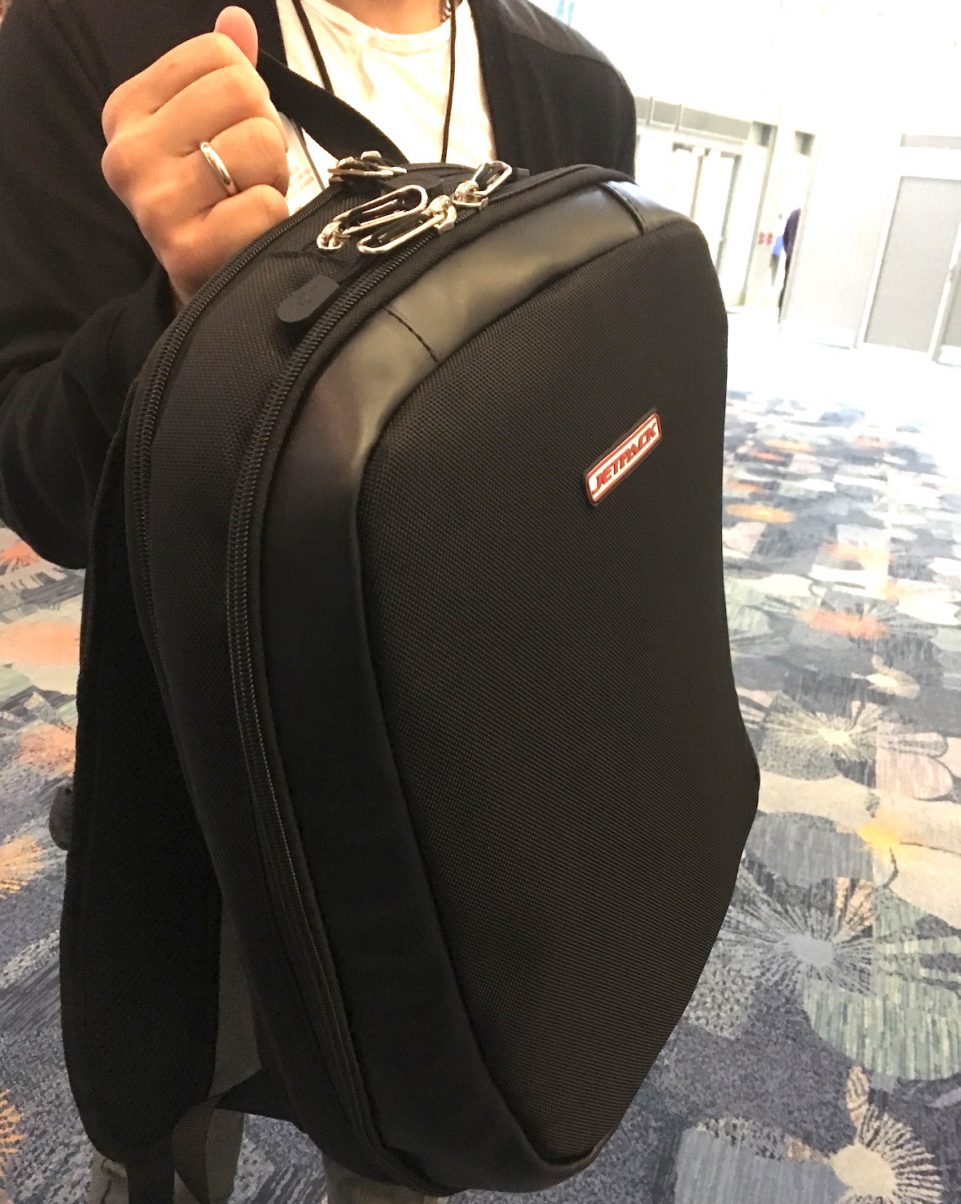 A really attractive slimline bag from Jetpack with all types of thoughtful design touches, this is for the DJ who travels light, although it is still wide enough to accommodate your control vinyl. 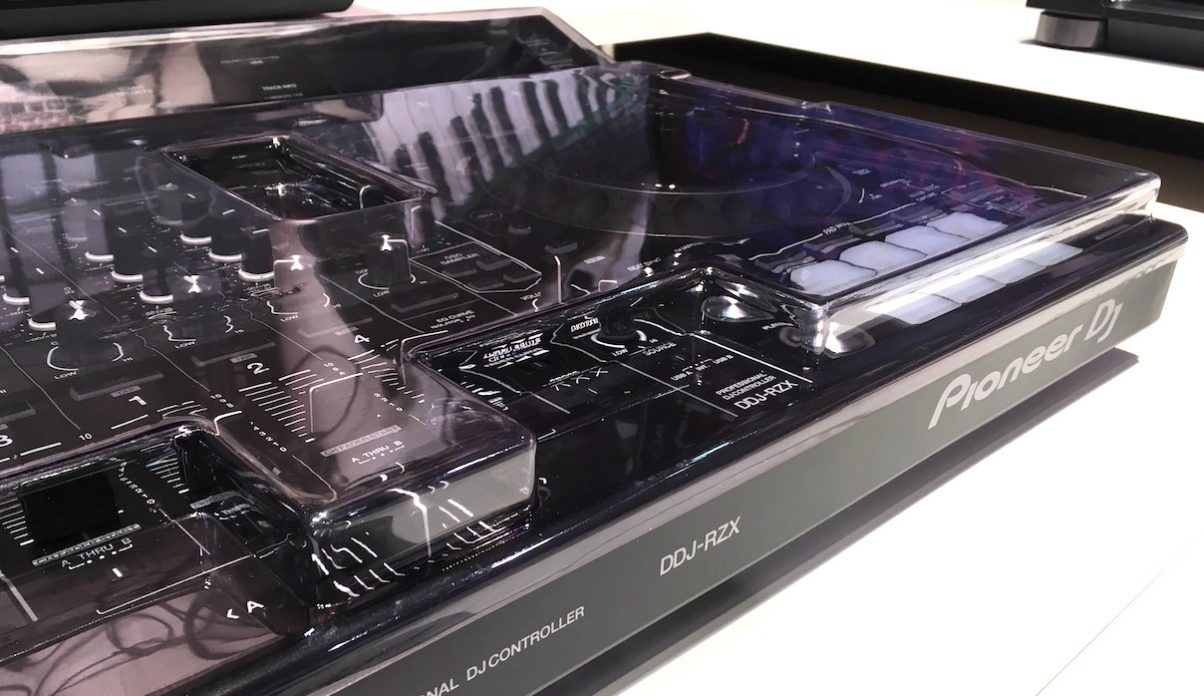 New gear means new Decksavers, the virtually indestructible covers to keep your equipment spick and span. Here’s a cover for the Pioneer DDJ-RZX; we also saw one for Pioneer’s little DJM-450, among others. 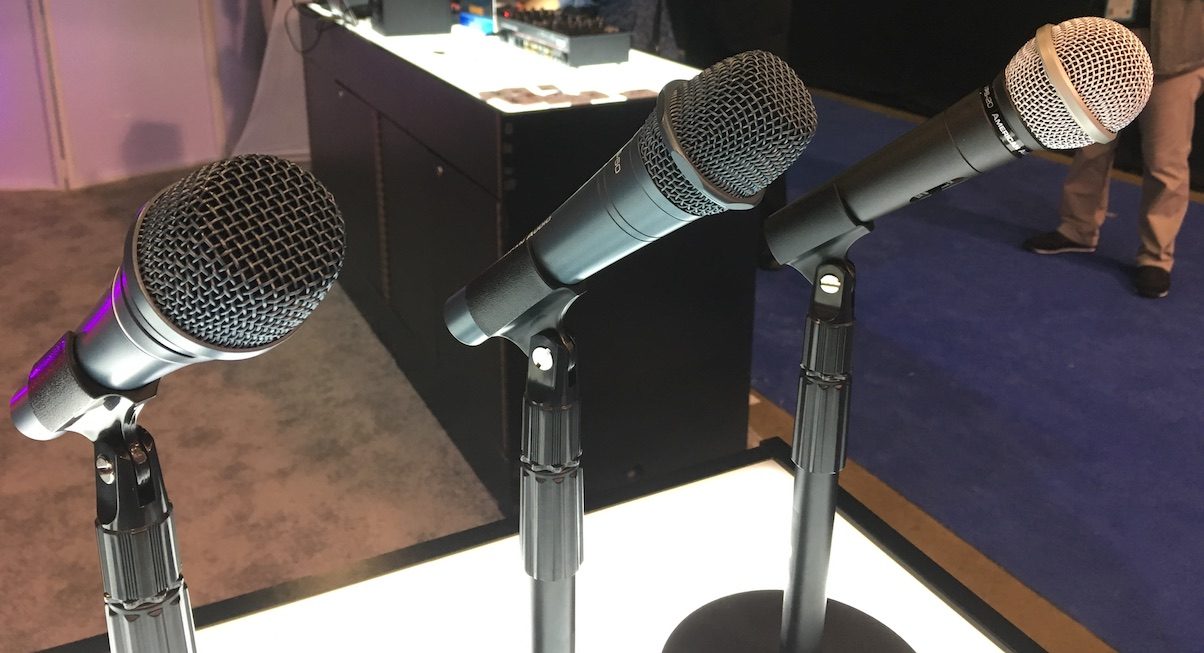 We were impressed by the standard of construction of these mics, which definitely feel a step above previous models from American DJ, although they are promised as coming in at an affordable price when they ship. 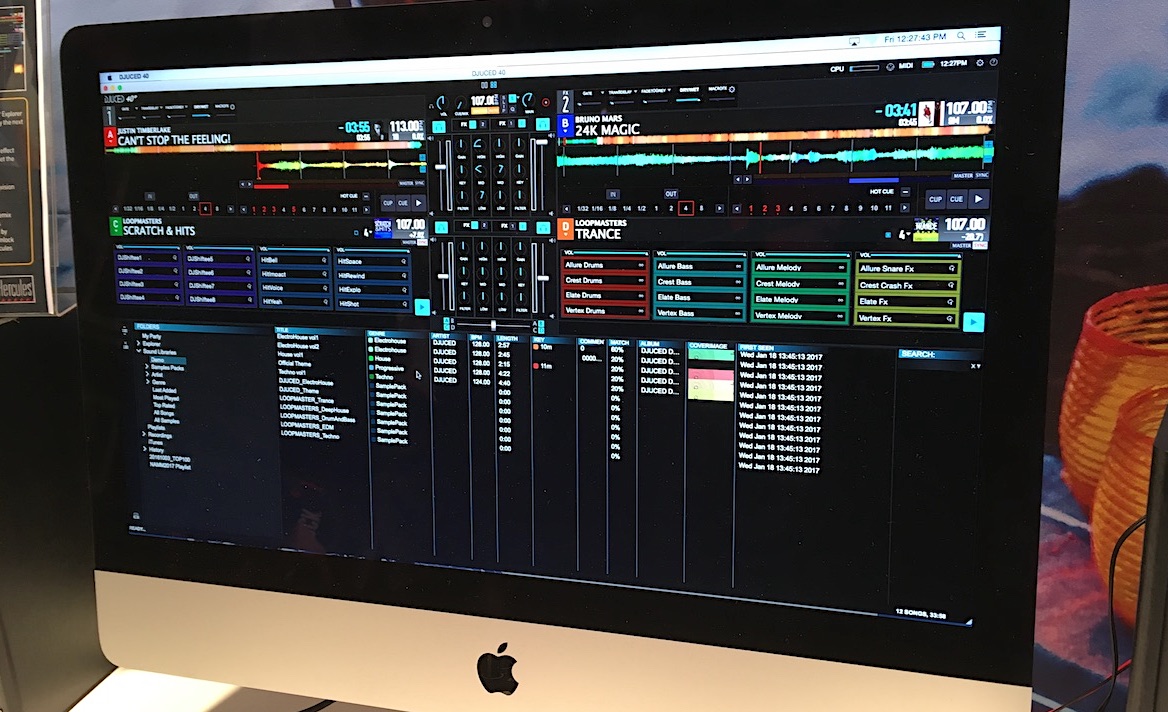 Hercules has quietly built the user base of its DJUCED plaform to 500,000, and this version has many improvements – it looks nicer, it has tighter jogwheel control, and best of all, it’s free with Hercules controllers. 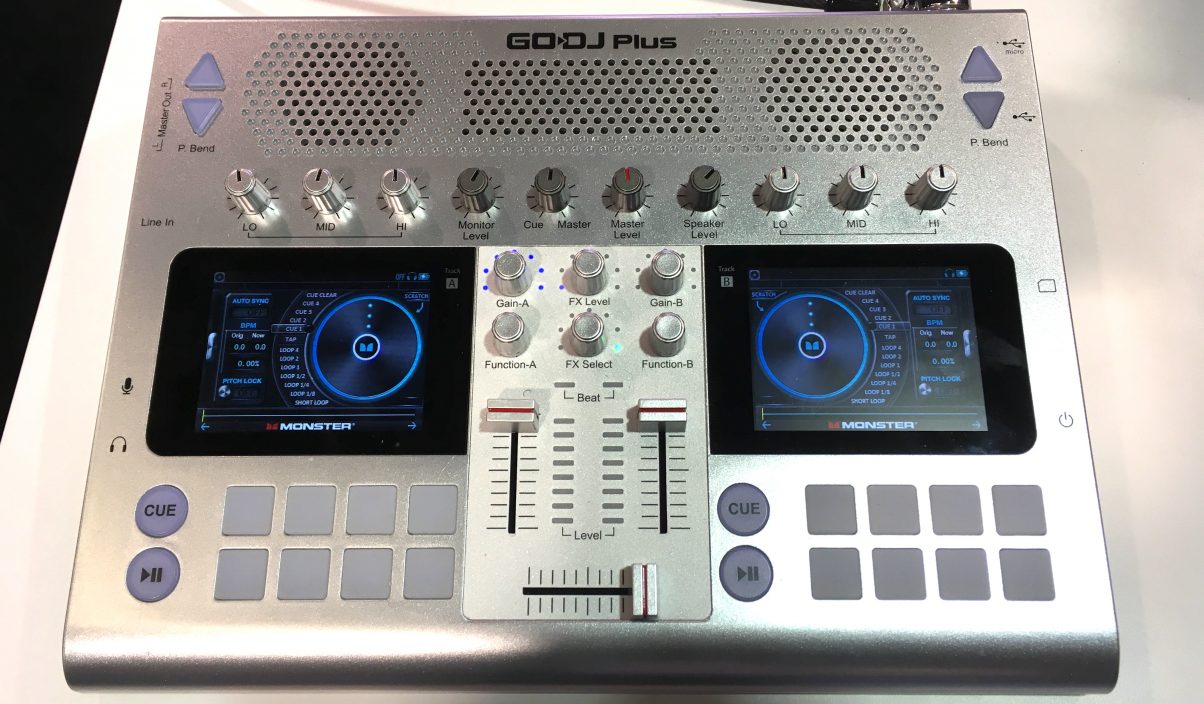 The mini DJ system that came out a couple of years back is getting a slightly bigger cousin, that packs a tiny pair of stereo speakers into its black or silver frame. Despite its tiny size, they were doing some cool things with it on their stand. 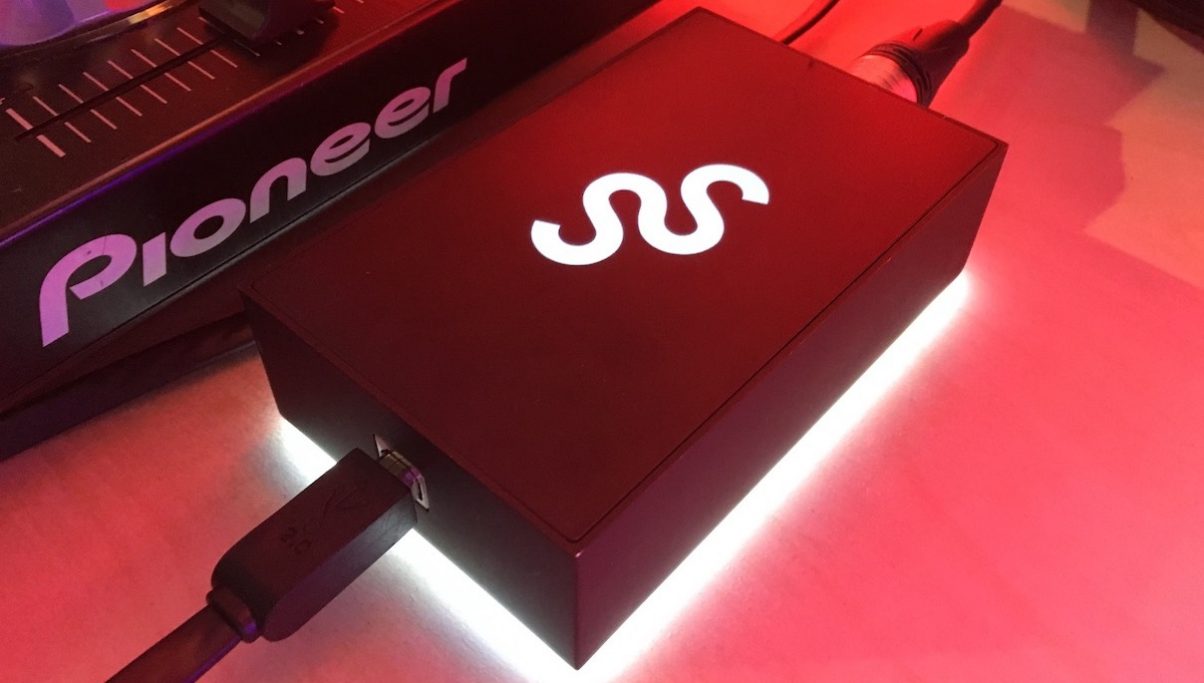 Soundswitch automates your lighting, meaning you don’t need to take an extra person with you to your gigs to operate the lighting controller. It “remembers” your songs, operating a light show of your choice as you play them. 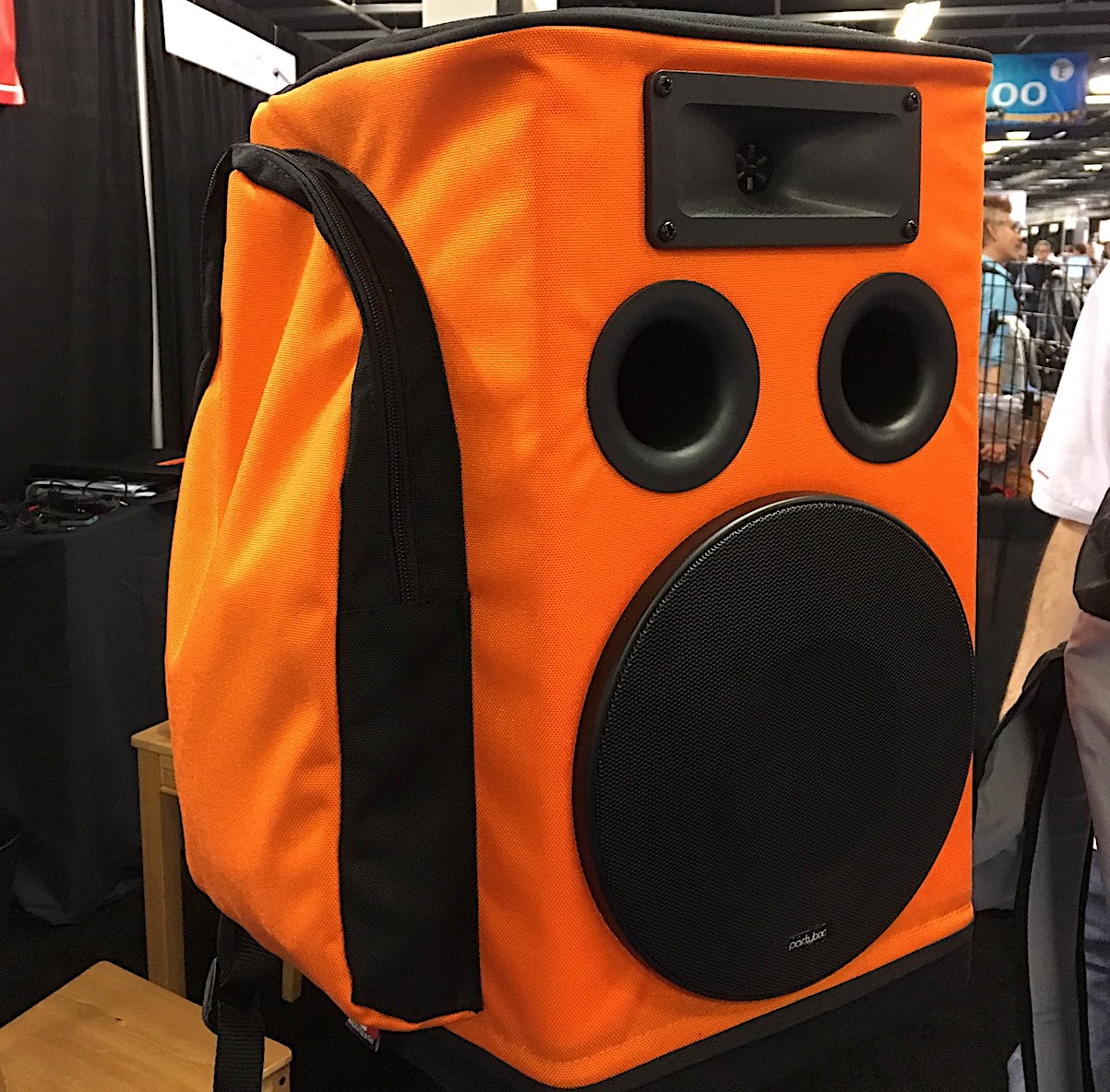 It’s a boombox. No, it’s a back pack. It’s a boombox backpack! You get the idea. Italian company Partybag (the clue’s in the name) were showing this fun unit. It comes in all types of colours, has Bluetooth, and is kind of cool. 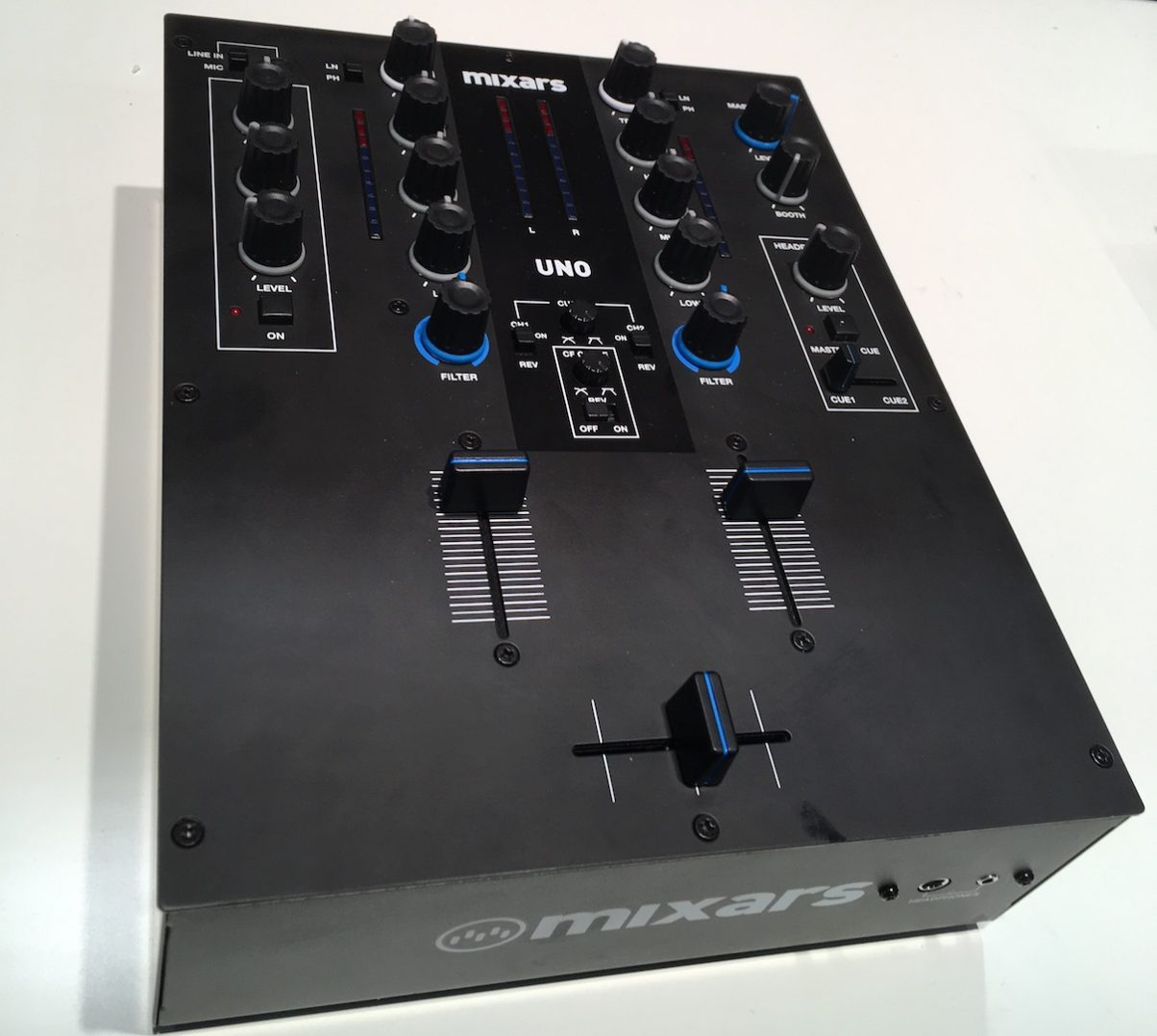 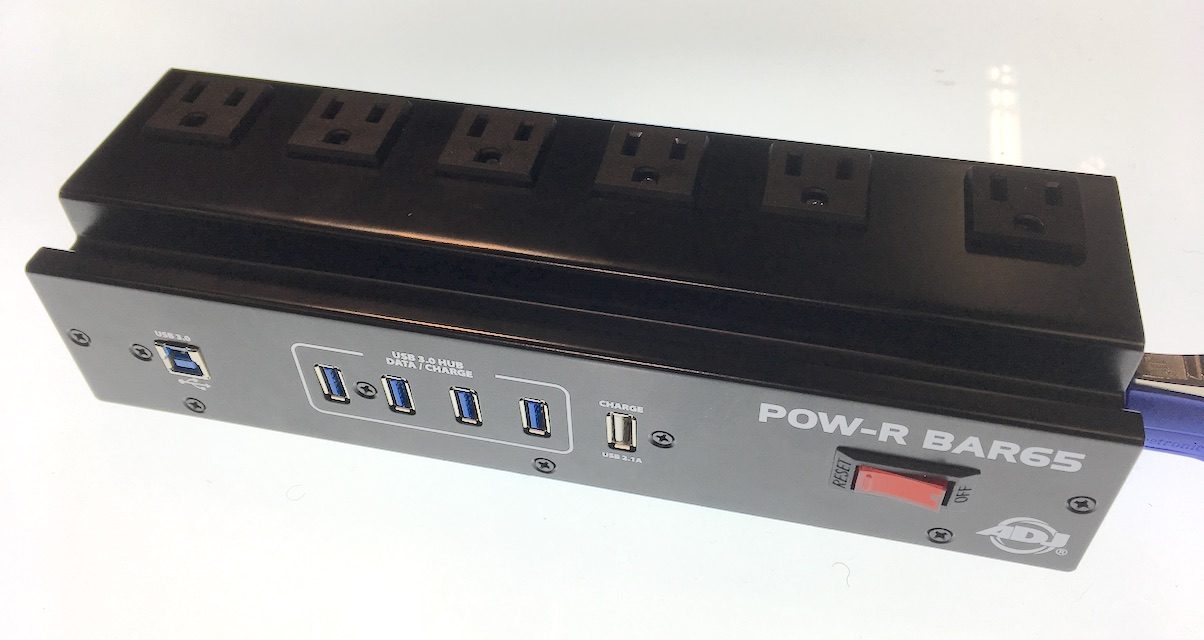 This useful device is a surge protector for six mains-powered devices, plus a USB hub and USB charger – it even has a groove to prop your phone or iPad up in while its charging. Good for DJs and electronic musicians on the move. (European version coming soon.) 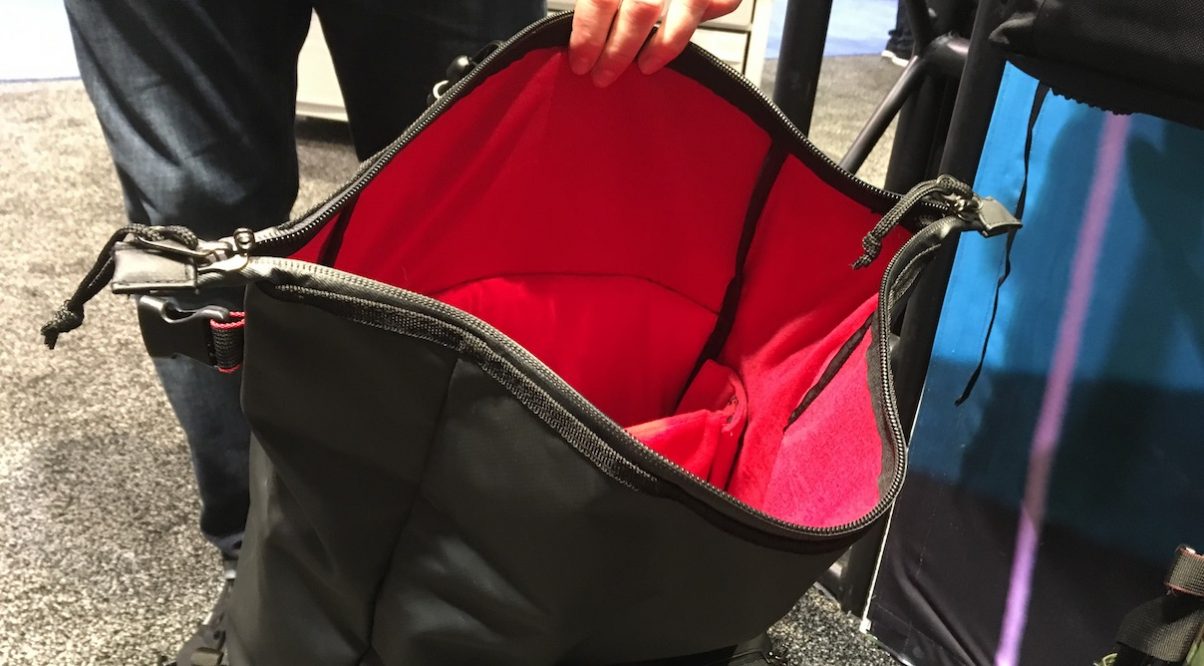 Stash bags (bags with big flaps at the top) are all the rage nowadays, and the advantage is that you can fit large pieces of gear in such a bag, but if you are carrying less stuff, strap it down so it’s smaller. 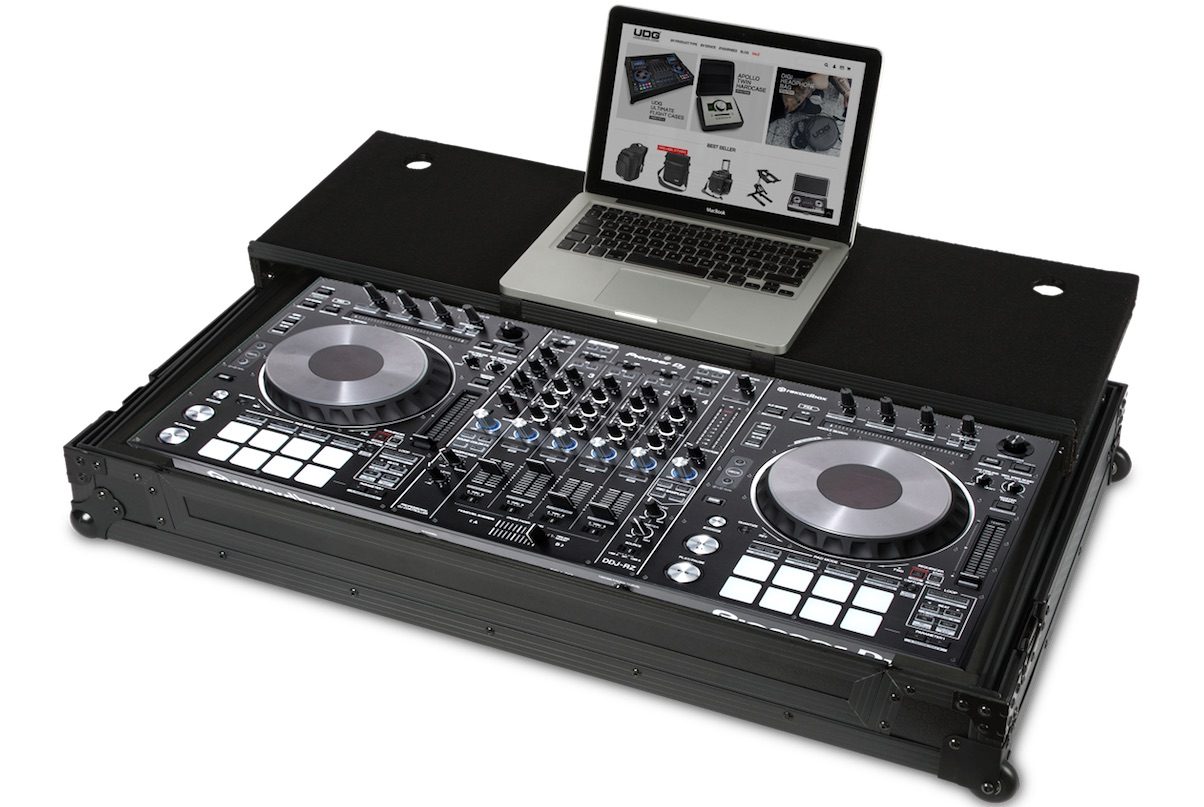 UDG – a company originally known for its record bags, but which has since expanded to making bags for all types of gear – has now released a whole range of flight cases, which were launched here at NAMM. 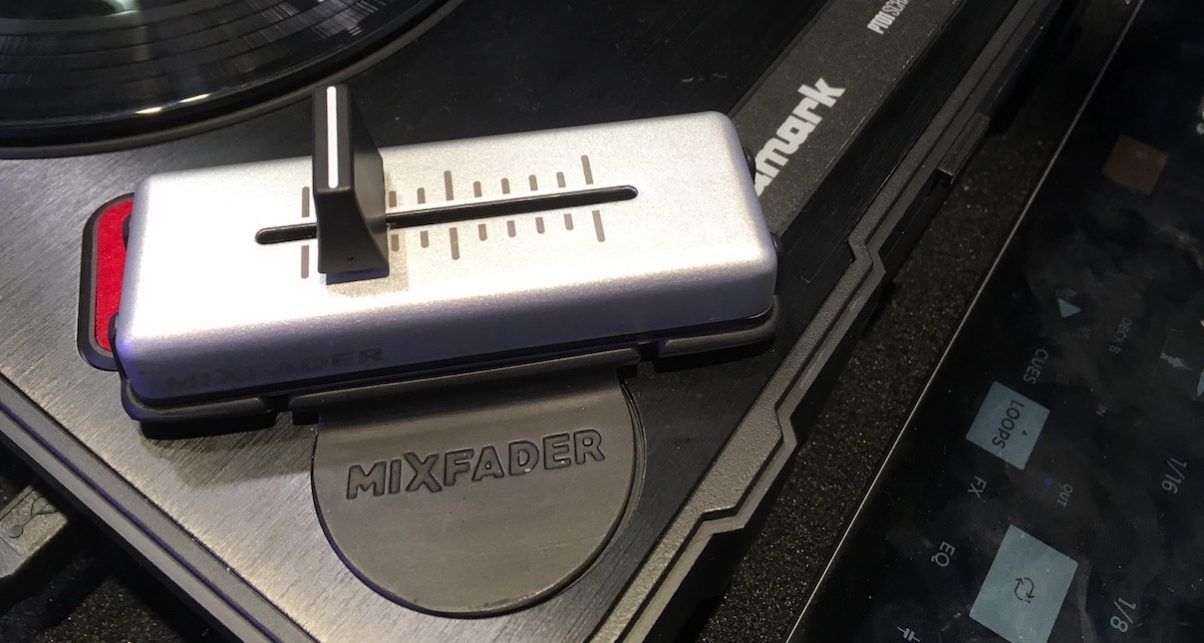 Mixfader has launched a mount to let you attach its portable crossfader to the Numark PT-01 Scratch portable turntable, giving you a neat, simple and totally mobile scratch practice solution.

As Digital DJ Tips is of course primarily an education resource for DJs (you do know we’ve got 14 DJ courses, right?), it was great at NAMM 2017 to hear so many manufacturers talking about the importance of training and teaching for DJs.

So much so, in fact, that we’ve started talking about ways we can work even more closely with many of them to help DJs use their products more effectively, and thus become better at what they do. Watch this space for more on that, but meanwhile, from another excellent NAMM Show – over and out!

Have you enjoyed our coverage? Anything we missed, or you wanted to see that wasn’t here? Let us know your thoughts in the comments… 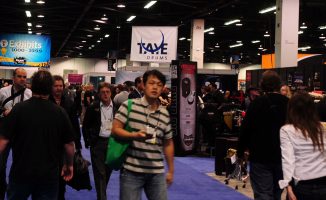 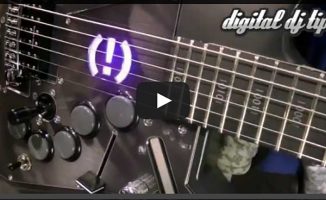