The Novation Circuit is a standalone groovebox sequencer with built-in drum, bass and synth sounds. It’s a fun, creatively inspiring little box that’s awesome to use and can get you serious results quickly regardless of your skill level.

Novation has been popular with the DJ/producer crowd because of its Launchpad series of grid controllers meant to be used with Ableton Live and a laptop. Recently, Novation launched Circuit, a standalone synth, drum machine, and sequencer in one, with a focus on letting you create tracks in minutes, all without a computer or software. Is it a good production tool for both beginner and intermediate DJ/producers? We find out in this review.

Circuit looks sleek: it comes with a matte black top plate and a blue rubber base. It’s got a 32-pad grid in the middle, with eight rotary encoders, a Master volume knob, and a filter knob (everyone needs filters these days…). There are function buttons all around the grid, and we’ll go through them later in this article.

Round the back is a pair of 1/4″ Master output jacks, 1/8″ Midi in and out sockets for connecting to other Midi gear (they come with 1/8″ to Midi cables), a USB jack for Midi connection to your laptop and for firmware updates, and a plug for the power lead. In the front of the unit is an 1/8″ headphone jack.Circuit can also be powered via six AA batteries for portable producing, and it even comes with a built-in speaker at the bottom of the unit. I found it lacking (not great when using it in a public place), but for when you just can’t be bothered to use your headphones when using it at home, it does the job. Don’t expect earth-shattering bass here, of course.

I plugged the Novation Circuit using its power lead, put some headphones on, and got to work.

One word: intuitive. The controls are thoughtfully laid out and are empowering. You don’t have to go through pages and confusing Shift-key layers to get to essential controls. Novation has done an outstanding job putting major functions in front of you because this minimises frustration, which I think is one of the main killers of creativity. Hardware production kit can be notoriously confusing, especially for new DJ/producers, but Circuit scores high in the usability department.

The grid
The Novation Circuit has a 4×8 grid at the centre of the unit. All pads are velocity sensitive and RGB backlit. You use these pads to play and perform sounds, and also to sequence patterns depending on what instrument track you’ve got selected. 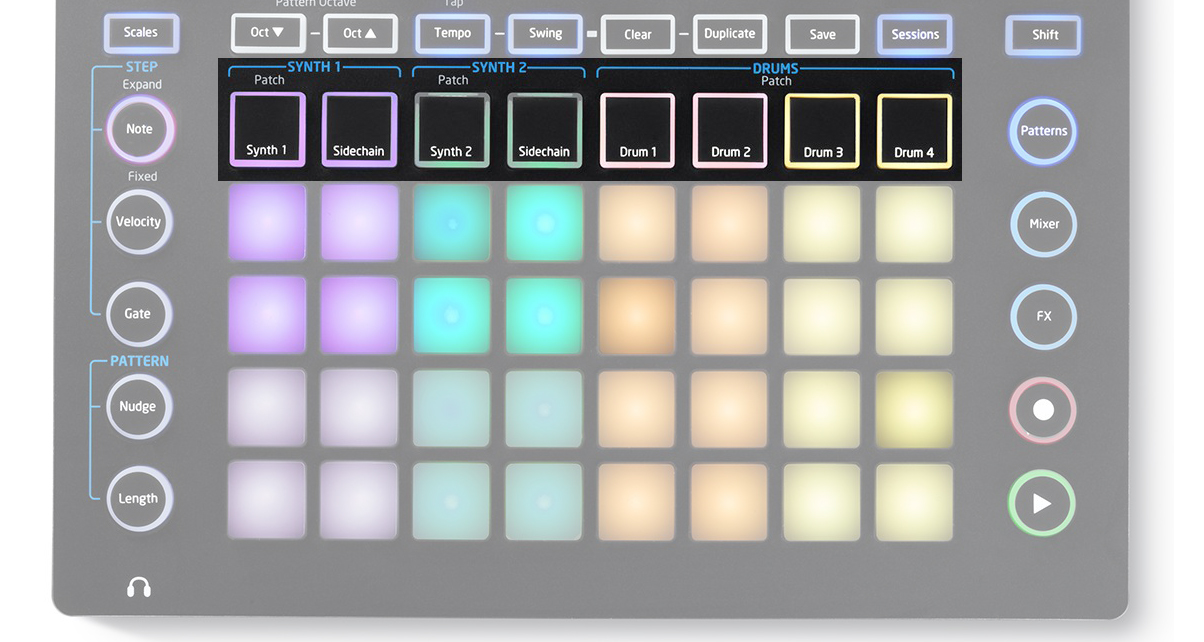 You can select a track using the eight buttons above the grid. These buttons let you select what the grid is controlling: you have a choice of two synthesisers with selectable sidechain compression presets (for that cool pumping sound you hear in a lot of dance tunes), and four drum tracks (kick, snare, hi hat, cymbal). This gives you a total of six tracks / six instruments to build your tune with. It comes with 64 synth patches and 64 drum sounds, and they sound great straight out the box. You can tweak them using the Patch Editor software if you want, but if you don’t like to fiddle around much, you’ll be pleased to know that these are “gig ready” sounds. 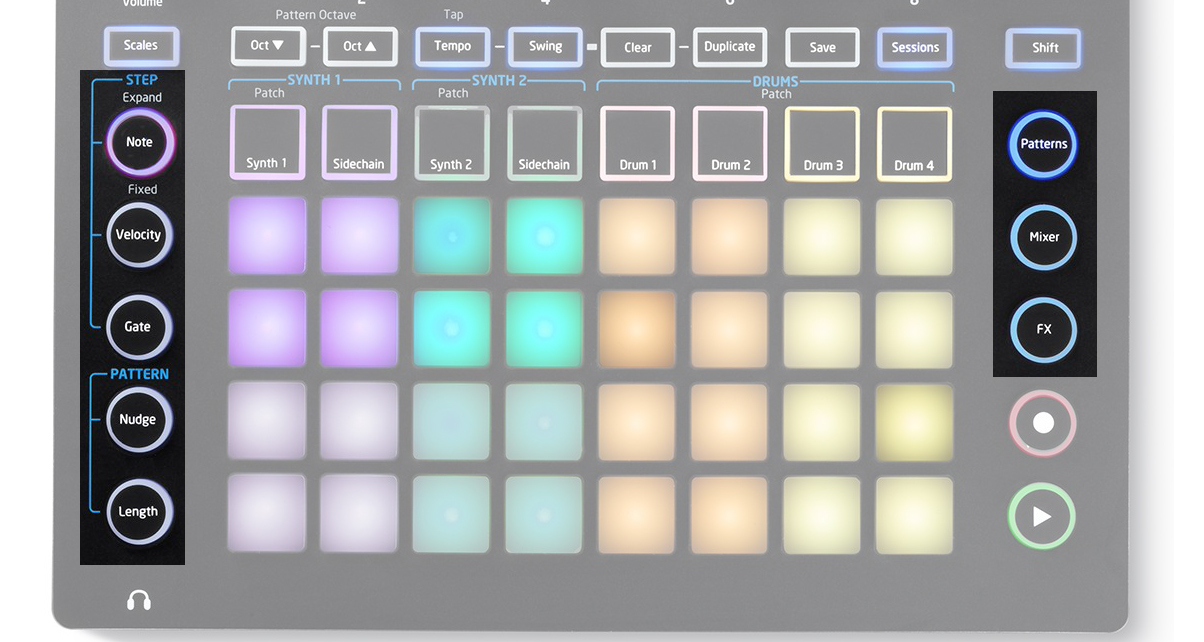 There are mode buttons that flank the grid. First on the right is the Patterns button, which let you choose and assign pattern lengths for all six tracks from one up to eight measures. The Mixer button turns the grid into an on/off switch for the instrument tracks, while the rotary knobs at the top let you control their volumes.

The FX button splits the grid in half, letting you choose from 16 delay presets at the top, and eight reverb presets at the bottom. The encoders are then used to send any of the six tracks to either of these FX – the knobs brighten and dim as you turn them, giving you visual feedback on the intensity of the effect.

Below these three mode controls are the record and play transport buttons.

Step editor
Over on the left you’ve got the Step editor buttons, which let you add or edit notes on the grid pad.

Note lets you draw in synth notes and drum hits. For synths, the top half of the grid functions like a two-octave keyboard, the notes of which are dependent on the scale you’ve chosen via the Scales button. The bottom half becomes a step sequencer for drawing in those notes – you can also just perform your synth parts by pressing the Record button and playing along.

Below the Note button is Velocity, which lets you change the intensity of a drum hit or synth note. Gate allows you to modify the length or duration of a note or drum hit that you’ve drawn in a pattern.

Pattern editor
Below the Step Editor buttons are two Pattern buttons: Nudge lets you move entire tracks forwards or backwards one step on the grid at a time, while Length lets you reduce a pattern’s length from sixteen pads for some cool variations.

Other buttons
The Novation Circuit has other function buttons: there are octave up and down buttons, tempo and swing controls, and clear and duplicate buttons for erasing and copying both notes and patterns. There’s a save button for saving your work to an empty slot, and a Session button for choosing a saved tune. 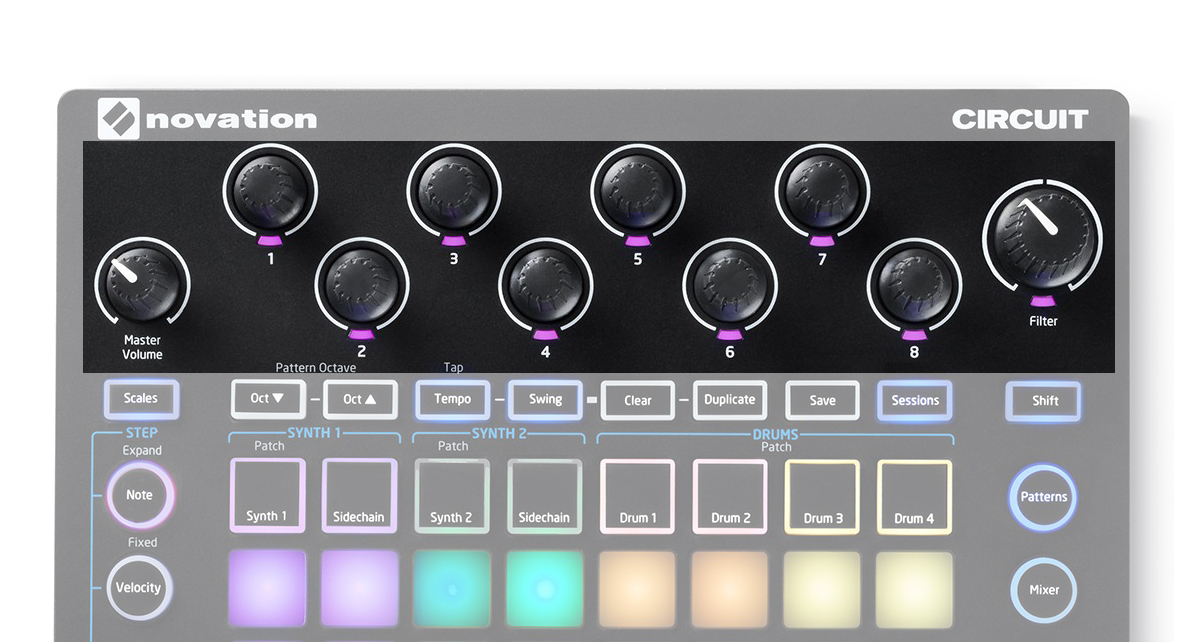 The Novation Circuit comes with eight endless rotary knobs with LED lights whose colours and brightness change depending on what function the grid is set to. They’ve got a nice, rubbery weighted feel, certainly not plasticky. The filter knob has a centre detent, and functions like a filter on a DJ mixer – turn it to the right and it works as a high pass filter, turn it to the left and it works as a low pass filter. This, too, has an LED light under it to denote intensity of the effect.

Protection
Since the Novation Circuit is good for studio and live performance use, you’ll want to keep it protected in both situations. The UDG Creator Novation Circuit is a lightweight hard case option – it’s a zippered clamshell that fits the Circuit specifically, and comes with a carry handle.

If you want something that’ll keep the Circuit free from dust when not in use while doubling as protection for the front face, Decksaver makes a cover specifically for it as well. I use both – I keep the Circuit dirt free using the Decksaver cover, and when it’s time to head out to the show, I put it in the UDG Creator Novation Circuit bag.

There are many step sequencers and grid controllers out there, but when it comes to ease-of-use, simplicity, and the ability to get something great straight out the gate, the Novation Circuit is the pound-for-pound champ. It’s also a great value, coming in at under US$350, considering that you’re getting an all-in six-track drum and synth sequencer that’s constantly updated (eg the current firmware is v1.3, and Novation just released the Circuit Component expansion suite).

I’m not a fan of the onboard speaker – it just isn’t loud enough. In my opinion, it shouldn’t be there – maybe the space (and cost) would be better used for something like a rechargeable battery instead (six AA batteries is just so 90s…).

In all, the Novation Circuit is a great bit of kit for new DJ/producers and those who want to make tunes quickly. In fact, if you want to get producing with hardware but don’t know where to begin, I’d highly recommend getting this because it gets you from zero to hero with a little less frustration than, say, the powerful but confusing Roland Aira TR-8 drum machine or the full-featured Pioneer Toraiz SP-16 sampler, which has a ton of cool tools onboard that may not be used to their full potential by beginner DJ/producers.