Reloop Elite is a premium two-channel mixer for Serato DJ. It sounds great, it has all the functions you’d expect from a mixer at this end of the market, and it pairs really nicely with Reloop’s decks, of which the RP8000Mk2s are particularly innovative. The built-in FX aren’t quite up to Pioneer standard for our ears, but they’re pretty good. It’s also US$450 cheaper, coming in at US$1250 – a decent saving over the Pioneer DJ model. One for your scratch mixer shortlist.

The Reloop Elite is a high-end two-channel scratch mixer, designed for Serato DJ Pro, and competing directly with the Pioneer DJ DJM-S9, which is pretty much the industry standard at this end of the market. But at US$450 cheaper, is the Reloop Elite actually a better choice? We find out in this review.

This really is everything you need to get started – you get the full version of Serato DJ Pro including the necessary DVS Expansion Pack, as well as two pieces of Serato timecode vinyl. Add turntables and a laptop, and you’re good to go. The matching Reloop RP7000Mk2 or RP8000Mk2 turntables are a good fit, to give you a completely Reloop branded set up at quite a bit cheaper than all the other pro-end options.

So compared to the Pioneer DJ DJM-S9, this mixer is noticeably bigger. That translates to bigger performance pads and pad selector switches, two bigger screens instead of the one on Pioneer’s mixer, more conventionally laid-out mixer channel controls, and more uncluttered space around the crossfader. 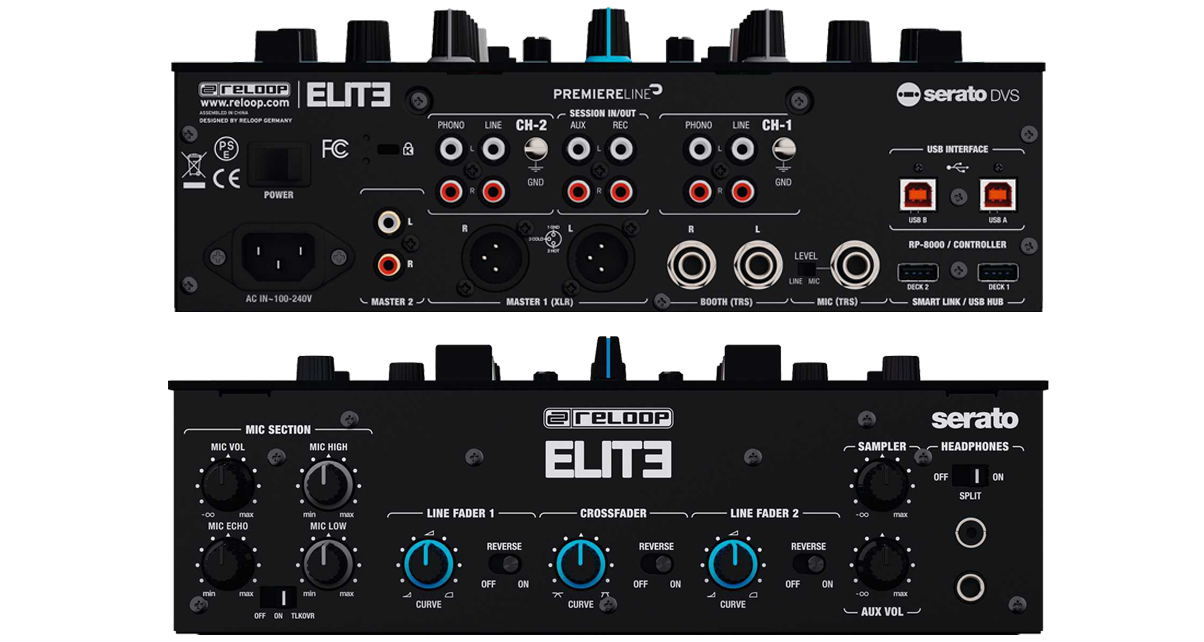 Build quality is comparable to the Pioneer unit, which is what you would expect for a mixer of this price, and all the high-end features from the DJM-S9 – things like dual USBs for DJ switchovers, hardware effects alongside control of Serato FX, wide choice of inputs and output, comprehensive mic control and so on, are all there.

Maybe the one surprising omission is the lack of paddle controls for FX off/on/momentary – these functions are controlled by two buttons instead.

Plugging in involves a simple USB to your laptop, although unlike with the Pioneer DJ DJM-S9, you get extra daisychain USB sockets on the back of this mixer, which can be used to plug in controllers or hybrid decks – the obvious decks to plug in being the aforementioned RP8000Mk2s from Reloop. This means all the Serato functions on additional equipment can be connected to the software with the single USB cable from the mixer to your laptop, in much the same way it works with the Rane Seventy Two mixer and Rane Twelve controller decks.

Our scratch tutor at Digital DJ Tips, Steve Canueto, spent several weeks using this mixer and indeed used it in the filming of some of the lessons in our Scratching For Controller DJs course. So we have a longer-term opinion on it as well as just a set of first impressions.

We found it overall to be a great mixer to use. Overall he particularly liked the extra size over the DJM-S9, and the fact that the pads are that much bigger.

Steve’s view on the built-in FX are that they’re not quite as good sounding as the Pioneer FX (they’re called “Tweak FX” on this mixer), but he did appreciate the way that they work with “normal” vinyl too, when the mixer is being used standalone.

The looping controls here are simple and easy to use; looping works on a single encoder, with on/off on the push function, and there is a single extra button for loop in/out. It’s intuitive and easier to use than on the DJM-S9, which uses the same system as CDJs (in itself not that hard to use, but this is better). There are also six LEDs to show where you’re set between 1/32nd of a beat and 32 beats.

The displays are old-school LEDs, but when you get used to them, they show a lot more info than on the DJM-S9. They show the hardware FX settings like on the DJM-S9, but unlike that mixer, they also show you Serato FX info. The Serato info is necessarily truncated and looks like computer diagnostics at first, but you’re actually being shown what three FX you have selected in Serato, as well as the dry/wet setting and the beat values.

And using buttons instead of paddles? It works, but isn’t as satisfying to use, and paddles have become kind of a standard in this type of mixer – worth thinking about this when deciding which control method is for you, and if you could live without them.

This mixer sounds great, it has all the functions you’d expect from a mixer at this end of the market, and it pairs really nicely with Reloop’s decks, of which the RP8000Mk2s are particularly innovative. Due to the integrated USB daisychaining, the whole lot fixes together cleanly, too.

It’s bigger than the DJM-S9 and so a bit less fiddly, but it does miss the paddles. The built-in FX aren’t quite up to Pioneer standard for our ears, but they’re pretty good. It’s also US$450 cheaper, coming in at US$1250 – a decent saving over the Pioneer DJ model.

If you can live without paddle controls for FX, and especially if you want to pair this up with the matching turntables (whether the RP7000Mk2s or the more fully featured RP8000Mk2s), it should definitely be on your list for serious consideration.