Remixlive is an enjoyable music app that’ll get you layering music loops in no time. Its streamlined interface is easy to use and understand, making it a good introduction to live loop-based performance. More sound packs would make this good app great, and hopefully they’re coming. Recommended.

Remixlive is available on the App Store as a free download, so I installed it on my iPad Mini 4. It comes with three sound packs straight away (dubstep, deep house, hip-hop), with more available for free and as paid downloads (each paid pack costs US$1.99).

It’s worth noting that these packs come from Loopmasters, one of the biggest and most popular online stores for sample packs. Its catalogue is well-curated, so you’re getting actual loops that producers in the industry rely on for inspiration or for shaping their tracks. If you want to work with your own sounds, you can also import your own loops and samples into Remixlive (a US$5.99 add-on purchase).

I ran the app for the first time and, after a minute or so of installing the stock sound packs, got to work.

Remixlive consists of four interface pages: the grid, which consists of an 8 x 6 matrix of pads that you press to launch clips from; the mixer, where you can control the volume levels and filters of each of the eight columns; FX, which has an XY touchpad and “Beat Repeat” performance pads for adding effects to individual tracks; and a cell settings interface that lets you adjust the launch behaviour of each cell.

At the top of the screen, regardless of which page you’re on, are controls for tempo, a global phrase meter (much like what you’d see in DJ software), as well as the record button for recording your performance, which you can send via e-mail or upload straight to SoundCloud.

Now, let’s go through the Remixlive interface pages one by one: 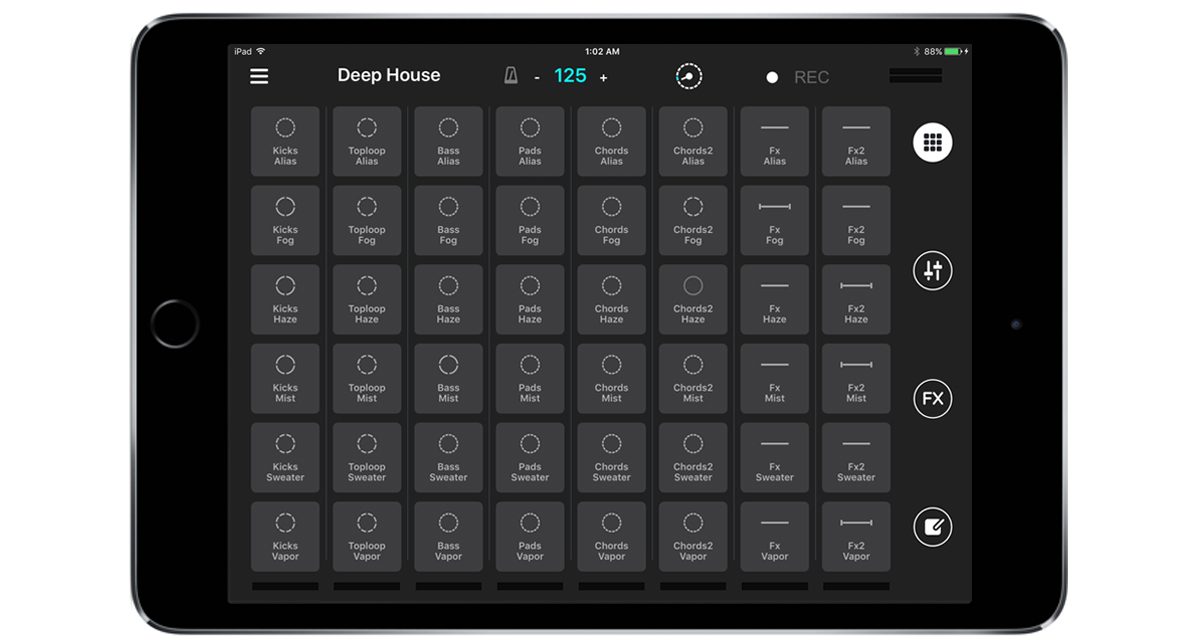 The Remixlive grid is where you’ll be spending most of your time: this is where you launch cells as you perform. Each cell has a name for easy identification (eg Kicks, Toploops, Bass, and so on) as well as a “countdown” of the audio in that cell. You launch a cell by pressing it, and it stays highlighted to signify that it’s playing back audio.

Launching of the cells are quantised, meaning that they start and stop “on time” depending on the quantisation setting that you’ve chosen (the default is one bar, or four beats). This makes it easy to perform because everything’s in sync.

Some cells have a dotted circle, which means they’re a loop that will continue to play as long as you’ve got them highlighted – to stop them, just press them again. Some cells will have a line – this means that they’re either one shots (meaning they won’t loop, so you’ve got to press them again to play) or they’re “gates”, which are cells that only playback sound when you’re pressing them.

You can launch any number of cells in a row, but you can only launch one cell per column in the default setting: switching to “Multiple Mode” in the Settings menu lets you launch more than one cell in a column. You can launch or stop an entire row or column of cells by holding a cell down and swiping left / right or up / down. 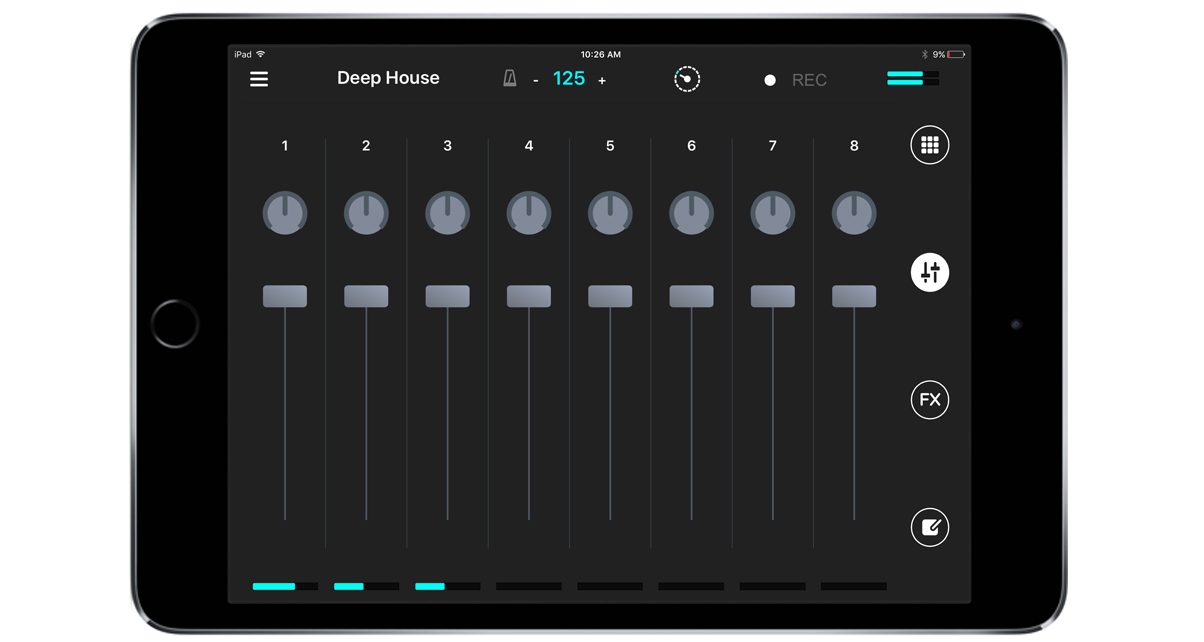 The mixer has eight channels – one for each column in the Remixlive grid. Each has a fader for adjusting volume, as well as a filter knob. At the bottom of each channel is a meter that displays the track’s overall volume.

I think a mute button for each channel would be a welcome addition here, because quickly turning a track on or off would mean that you’d have to jump back to the grid page just to toggle the cell – perhaps this could be implemented in a future update? 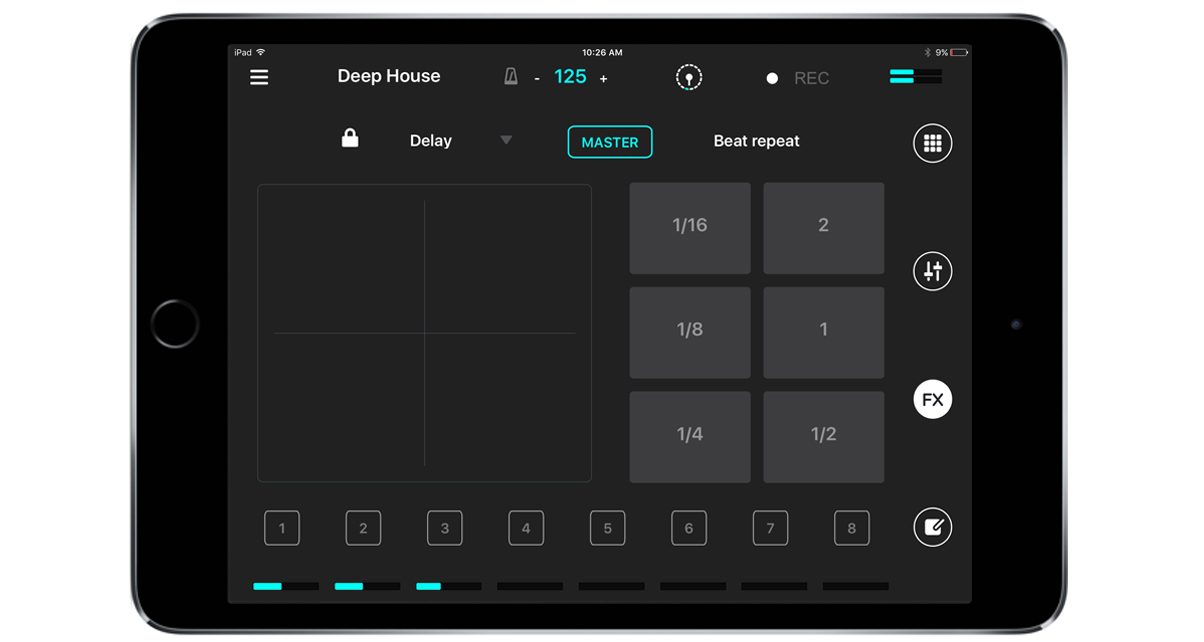 The FX page lets you add effects to any of the eight tracks, either individually by selecting the track number at the bottom of the screen, or all eight of them by pressing the “Master” button. There are two main interfaces here: to the left is an XY touchpad with a dropdown menu of effects. The free effects are delay and filter, while others like flanger, reverb, and “whoosh” are in-app purchases (US$0.99 each, or US$1.99 for the whole hog). 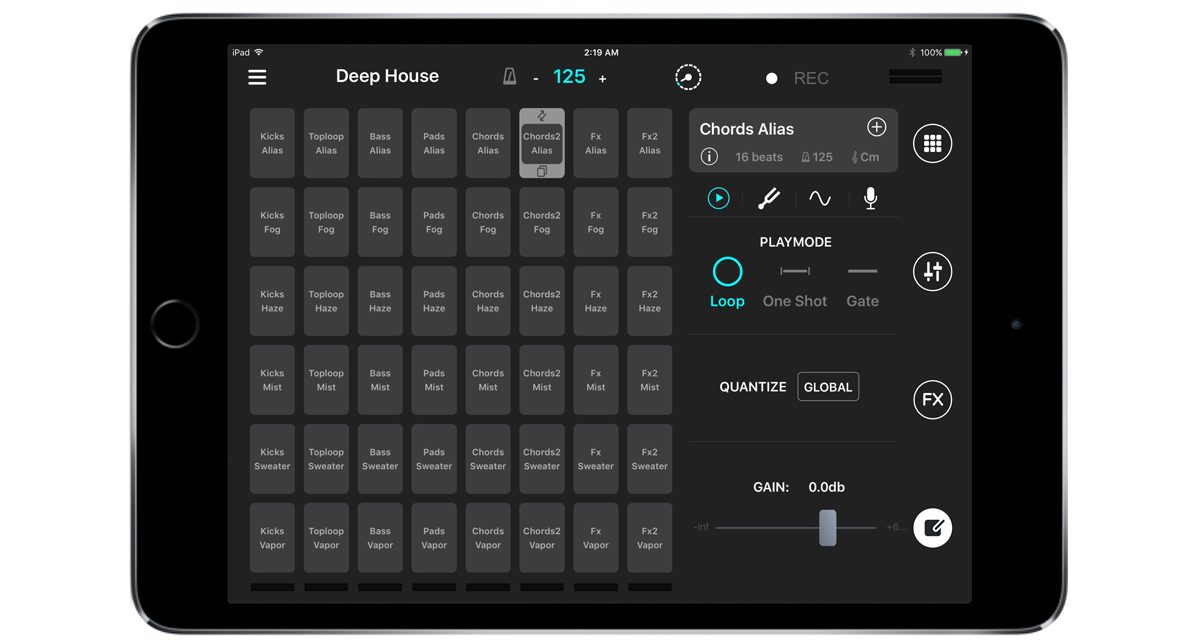 Lastly, the cell settings page lets you edit each cell in the Remixlive grid. You can rename each cell and adjust its playback behaviour (loop, one shot, or gate). The transpose and audio editing features come as extra in-app purchases (US$3.99 and US$1.99). You can also record directly to a cell using your iOS device’s built-in microphone, and you purchase unlimited audio recordings through the store as well.

It’s comprehensive, and Mixvibes has done an admirable job making it as streamlined as possible without oversimplifying, especially the recording / sampling section which budding DJs and seasoned producers alike will find useful for performing with their own loops and sounds.

As of version 1.2, Remixlive comes with Ableton Link baked in. This lets it sync up with other apps that are compatible with Ableton Link, including Mixvibes’ own Cross DJ Pro. The apps are able to “talk” to each other via WiFi or if they’re on the same iOS device, and makes for some very fun jamming that’s on time and in phrase.

We’ll do an in-depth review of Remixlive’s Link capabilities when we review Cross DJ Pro for iOS.

Remixlive is a fun, capable app for building music live using loops and samples. It’s easy to use and comes with great sounds in the box, and the simple interface makes it a good entry point into the world of loop-based performances for beginners.

There is room for improvement: the mixer section could have mute buttons per channel as I’ve mentioned, and while the sound packs are decent, there needs to be a lot more content to make it compelling to a broader set of DJ/producers. Hopefully, these are coming.

In all, Remixlive is a joy to use, and I’ve found myself using it more than any of the pad-based music apps I’ve got on my iPad Mini 4. I’ve killed more time tinkering with Remixlive than I’d like to admit, to the point of forgoing any of my beloved iOS strategy games like X-COM and Shadowrun: If that’s not enough of a recommendation, I don’t know what is!