The Universal Audio Apollo x6 is a 16-input / 22-output interface for the DJ/producer who wants to take his or her producing seriously. It’s got everything you need to take your music production to the next level, including two Unison-enabled microphone preamps that emulates vintage sounds, six line inputs and outputs, and a Hexacore UAD DSP chip. It’s pricey, but if you’re an intermediate producer who’s ready to take things to the next level (and you’ve got the budget for it) this comes highly recommended.

The Universal Audio Apollo x6 is a rackmount audio interface for music producers that’s got enough analogue inputs and outputs as well as digital plugin processing power to handle a serious DJ/producer’s studio needs. It connects to either a Mac or PC using Thunderbolt 3, the fastest Thunderbolt iteration at the time of this writing.

The front of the unit has two rotary encoders: the left is for adjusting preamp or line level gain, while the right is for adjusting monitor level. Both are push-button encoders that can double as input selection or mute switches.

Round the back are two Unison-enabled combo mic inputs (more on that later), six 1/4″ line inputs and outputs for hooking up synths, drum machines, samplers, effect processors and other line level devices, two 1/4″ monitor outputs for connecting speakers, Wordclock, S/PDIF and ADAT connections for connecting other external legacy gear, two Thunderbolt 3 ports, and a power socket.

The Apollo x6 comes with the Realtime Analog Classics Bundle which is a set of 16 proprietary plugins (called UAD powered plugins) that emulate some of the world’s most loved pieces of hardware such as the UA 1176LN Limiting Amplifier, Pultec EQP-1A EQ, and Fairchild 670 compressor, plus amp simulators like the Marshall Plexi Classic for guitar and Ampeg SVT-VR for bass. Right off the bat, these sound fantastic and are some of the best “vintage plugins” you’ll be able to use today. 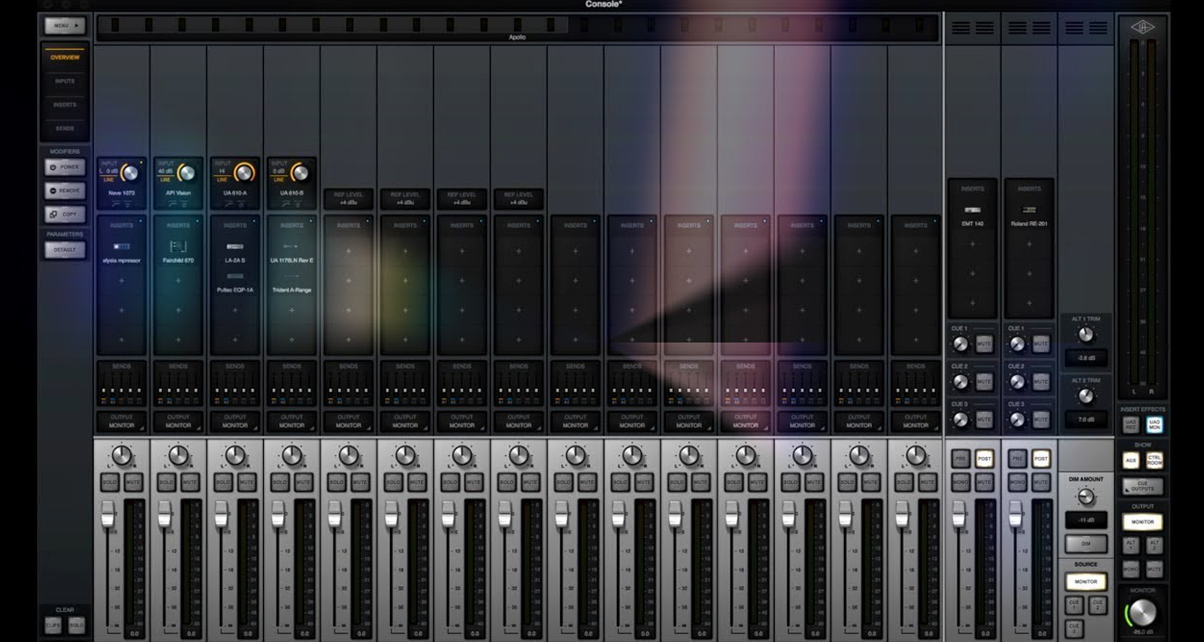 The Apollo x6 also comes with the UA Console app – it looks like a mixing board where you’re able to modify routings, see meter levels, and even add UAD plugins.

I hooked it up to my iMac production station and got to work.

The Apollo x6 comes with two combo mic jacks that have mic preamps that are “Unison-enabled”. That lets you load up different types of vintage analogue preamp emulations from the UAD powered plugins catalogue (purchased separately) from the classic sounds of studio legends like Neve, API and SSL, and of course UA’s own preamps from the mid-20th century.

What this means is you can run a microphone through either of these two preamps and get those big, fat, warm sounds associated with the biggest names in recording at the fraction of the price. For comparison, a hardware Neve 1073 preamp (revered for its tone and warmth) costs US$995 new – and more if you get the vintage ones – while the Neve preamp plugin comes in at US$149.

The question here of course is does it sound as good as the hardware? In our tests (at least with the Neve 1073) it’s pretty close, though there are slight differences between the two. The plugin is still the more cost-effective option, plus you get to place it in as many channels as your Apollo x6 Hexacore chip allows (somewhere between 30-45 tracks in our tests). So if you think about it on that scale, recording through and mixing with 30 channels of Neve 1073s costs almost US$30,000 if you’re buying the hardware individually. Bonkers for a home / bedroom studio / your credit rating, so the plugin becomes the next best thing. 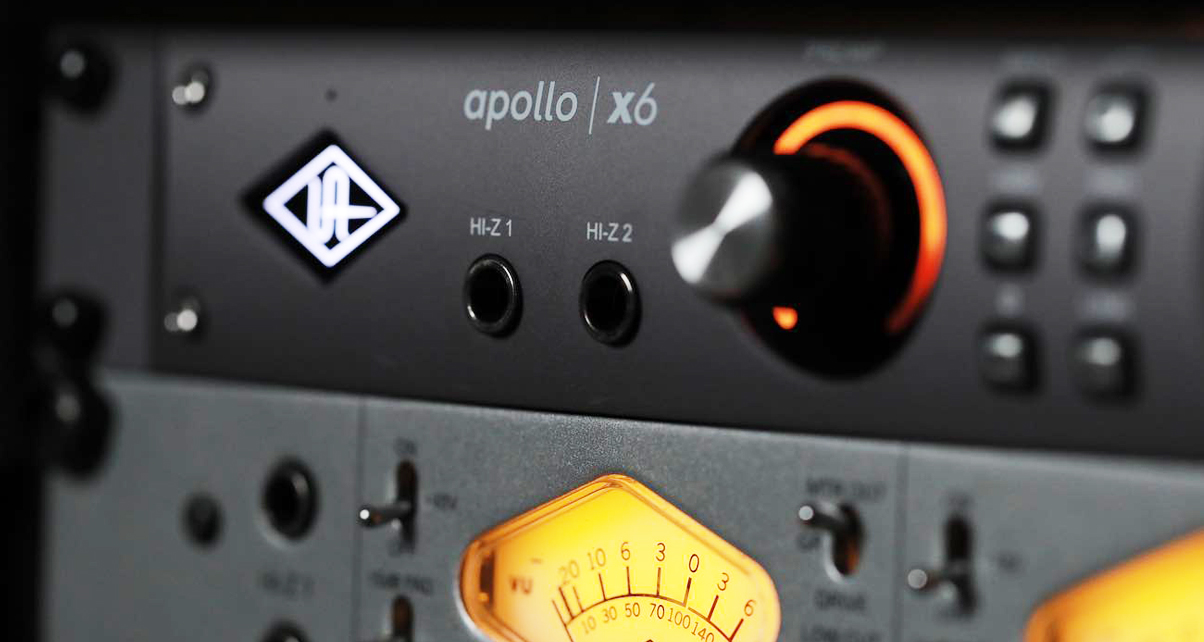 There are six line inputs and six line inputs on the Apollo x6. You can use the inputs to connect line level devices like synths, drum machines, samplers and even DJ gear if you want to. If you’ve got a small mixing board that you want to use, you can even connect that if you like.

There are two Hi-Z / guitar inputs on the face of the unit which lets you plug in guitars and basses, which is great for tracking these instruments through the guitar / bass amp emulations that are available in the UAD catalogue including classics from Fender, Marshall and Apeg.

The six outputs can be used to connect to analogue effects like EQs, compressors and reverbs. They can also be connected to speaker monitors (more on that later) or to the inputs of an analogue mixing desk for more flexible routing options.

There are two 1/4″ headphone jacks on the face of the unit with volume knobs, and you can choose which channels are routed to them via the UA Console application.

All of Universal Audio’s Apollo interfaces come with “UAD-2” chips. These chips take on the plugin processing whenever you use a UAD plugin. This is good because it frees up your computer to do other critical processing so your system doesn’t slow down when you’ve got lots of plugins loaded, which means lower potential latency / lag in your sessions.

However, this also means that the number of UAD plugins you use are determined by your UAD-2 chip’s available power.

The Apollo x6 sits somwhere between the mid and high-end, having a six-core (Hexa) configuration. This lets you add quite a big number of plugins while still giving you the audio inputs and outputs you need for your studio set-up.

The UAD plugins are regarded as some of the best, most “authentic” emulations of hardware effects in the professional recording industry, though they do come in at a rather steep price: expect to pay upwards of US$100 for classics like the Pultec EQ and API-500 EQ. 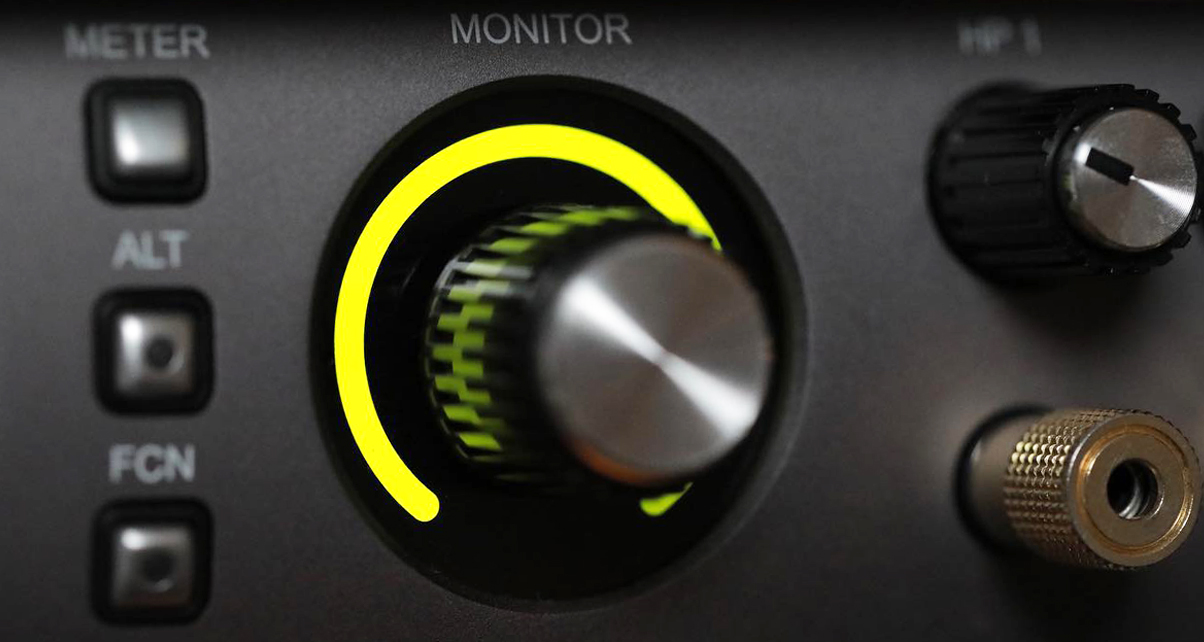 You can also use the outputs if you’ve got multiple speaker set-ups in your studio. You can hook up to three pairs of them and switch amongst them using the controls either on the face of the unit or via the UA Console app.

Cascading with other UA gear

Speaking of other models, you can hook up to six Universal Audio UAD interfaces or accelerators which allow you to add more power as your needs grow. Furthermore, they’ve got functional synergy as well: for instance, you can use the Apollo Twin as a “remote” for the Apollo x6.

There’s so much to say about the Apollo x6 – think of it as a combo interface, mixer, DSP behemoth and monitor controller that fits in a 19″ rack. It wasn’t long ago that something as powerful and versatile as this would fill an entire studio control room and costs hundreds of thousands of dollars. Digital technology has come quite a long way – even seasoned engineers who cut their teeth on analogue workflows like Andrew Scheps and Fab DuPont now mix “in the box”, sometimes without any analogue gear at all.

A big, fully kitted studio with expensive gear and a massive analogue desk will still have a place in music production, but when it comes to convenience and price, digital just can’t be beat, which is why it’s more common these days to see hybrid analogue / digital or even purely digital workflows in professional production environments.

If the connectivity and processing power of the Apollo x6 are too much for your set-up, another option would be to check out Universal Audio’s recent desktop interfaces: the Apollo x4 (US$ 1799) and Apollo Twin X QUAD (US$1399) are good options, but you’re just getting a quad-core UAD-2 chip as opposed to the hexa-core of the Apollo x6.

The Apollo x6 is pricey, but with so much to offer intermediate producers and lots of room to grow for even those who want to produce full-time, the Apollo x6 is that rare bit of aspirational kit that’s still within reach. If you’re ready to take things to the next level and you’ve got the budget for it, this comes highly recommended.

Buy now from Amazon
Apollo x6 music production Pro Universal Audio
By using this site you agree to our privacy and cookie policy. Read it here.