The Universal Audio Arrow is a portable two-channel Thunderbolt 3 interface for DJ/producers that’s got everything your bedroom studio needs for getting audio into and out of your DAW. It’s built like a tank, has an intuitive single knob control with buttons and metering, and clean microphone preamps for tracking vocals and acoustic instruments. It also gives you access to Universal Audio’s library of analogue emulation plugins, though the Arrow can only handle a few plugins since it has only got a single core processor doing all the heavy lifting. Overall a fantastic interface for DJ/producers who want a robust solution with premium features.

The Universal Audio Arrow is a Thunderbolt 3 interface for Macs and PCs. It has two combo XLR mic and line inputs, a pair of 1/4″ master outputs for plugging your monitor speakers, an instrument or “Hi-Z” input for plugging a guitar in, and a 1/4″ headphone output. 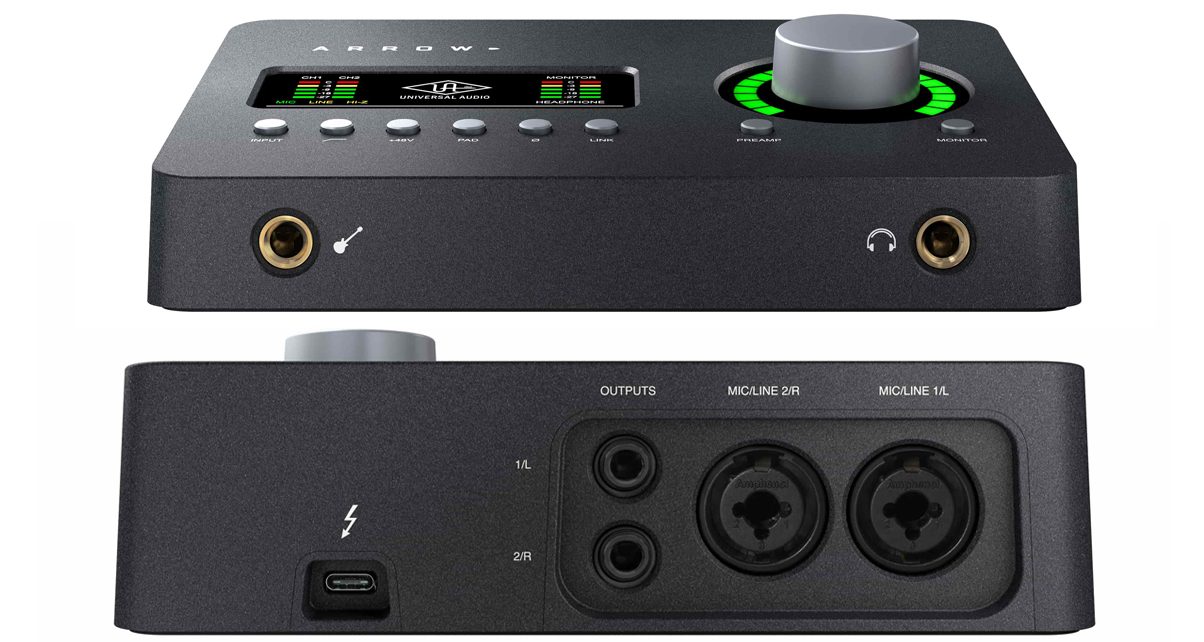 The face of the unit has two level meters: one for the Mic / Line / Hi-Z inputs on the left, and another for the Headphone / Monitor outputs on the right. It also has buttons for Input select (to choose whether to control the Mic or Line inputs), a high pass filter, a +48 phantom power button for condenser microphones, pad, phase, and stereo link (for simultaneously adjusting the level of both input channels). There are also Preamp and Monitor select buttons, which let you choose which level the knob is adjusting.

The Arrow comes with a suite of software: it ships with plugin emulations of the legendary LA-2A and 1176 compressors, a tube preamp for recording vocals, and a Marshall Plexi guitar amp simulator. It also comes with the Console app lets you make input / output adjustments within your computer, and also lets you add effects to the audio that’s going into your DAW.

It can be a bit confusing at first, especially when you’re adjusting the level of your inputs and then you’ve got to switch to adjust the output, but you do get the hang of it after a few sessions. It’s surprisingly intuitive, and makes perfect sense given the small footprint of the unit.

Universal Audio is well-loved for its excellent vintage outboard gear (search for the aforementioned 1176 and LA-2A compressors to see what I mean) but the company is also well known in DJ/producer spaces for its plugin emulations of analogue equipment, and they are highly regarded in even the most snooty of audio engineering circles. The company also has digital versions of tons of other popular processors and recording kit: EQs from popular companies like Neve, API and SSL are available, along with reverbs, delays, limiters, mastering gear and even auto-tune.

One of the coolest things about the Arrow is its built-in Unison Preamps. These special preamps provide a clean, transparent signal for your inputs, but the real power lies in how the Arrow processes that signal: just like the hardware processing emulations mentioned earlier, Universal Audio also has preamp emulations of some of the greatest mic preamps in history, allowing you to get the “coloured” sound of recording through those mic preamps that are only found on recording consoles costing tens of thousands of dollars.

The Arrow comes with the UA 610-B preamp emulation, which provides a nice fat sound to vocals. We were also able to test the Manley VoxBox, which is an all-in-one vocal processor that includes a preamp, EQ and de-esser, and it’s a powerful tool that intermediate DJ/producers will love to use when tracking and mixing vocals.

I’ve been using Universal Audio gear for almost a decade now – I started using the UAD plugins back when I was still running my commercial studio facility, and I always loved the sound I got from them. Now that I do more electronic music production work at home in my project studio, I needed a high-quality interface that wasn’t too big (I didn’t have to record full bands anymore) so I opted for the Universal Audio Apollo Twin a few years back. It’s great, but I hated having to plug the device into a wall wart especially when I had to do location recordings. The Arrow is a more portable solution, and it sounds similar to the Apollo Twin at a lower price.

If you’re a bedroom DJ/producer and you’d want to take your music production more seriously, stepping up with a Universal Audio interface like this is a good idea because of the input and output options that you’re given. It also lets you step into the wonderful (and addictive) world of Universal Audio analogue emulations, which really are some of the best plugins you can get today.

It’s not as cheap as a Focusrite or M-Audio interface, but the sound and build quality plus access to the UAD plugins are worth the price of admission. The only drawback is that it’s only got a single processing core onboard, and you’ll quickly learn that you need some more when you begin mixing your project – good thing you can add more UAD cards as needed (they’re pricey though). Overall, a great high-quality interface that rivals many mid-range devices. Recommended.