These look, feel and behave as DJ headphones should. DJ headphones aren’t known for being subtle, and these are don’t break the norm, with their chunky styling, logo-emblazoned across the top, and chrome trims on the earcups. They’re not as expensive as true pro ‘phones, and the compromise shows in the lack of real leather and the rather plasticky hinges. The latter point brings me on to my final observation: Durability.

In the box are two cables, coiled and straight: Both are long, gold-plated, and able to adapt from 1/8″ to 1/4″ with the supplied adaptor. There are also a spare set of earpads (in imitation leather; the ones fitted are in a velour material) and a black plastic drawstring carry bag.

Despite being quite substantial, the headphones themselves are actually pleasingly light. They have a thick, bendy metal headband, covered in nylon mesh (internally) and imitation leather (externally), which bears the “Zomo” logo in white.

The adjustable hinges are plastic and painted silver, similar to the Sony MDR-700s, with the familiar horseshoe-shaped section connecting each hinge in two places to the earcups.

The earcups themselves are chome, transparent acrylic and an oily black rubber-type material, with the Zomo logo printed on the front of the acrylic part. The oversized pads pull on and off. The detachable cords are 1/8″ stereo TRS, connecting to just one of the two earcups, and twisting to lock.

I took these down to my regular gig this weekend to give them a whirl, and DJed with them for four hours in a hot and sweaty environment, so they’ve had a good test. First thing is, they do the job fine. They pass all the crucial tests: They’re loud enough, they’re reasonably well isolated (due in no small part to the tightness with which they hold themselves over your ears); and they feel right, with easy twisting of the earcups out of the way of one of your ears if that’s how you DJ.

More importantly, the earcups flip happily out of the way of your chin when you’re wearing them around your neck, which of course you’ll probably be doing a lot of the time when not actually cueing a track up, and which is important on this type of design, because you don’t want to end up feeling like you’re wearing a neck brace.

After four hours, I found them quite hot, particularly the headband, becasue it’s synthetic, and the fact that it was mesh didn’t help – but as I said, I was using them in a hot environment. Also, having got them home, I noticed how easily the suede-like earpads pick up dust; obviously the leather-effect pads would not do so.

Once back in a more “listening” environment, I checked them out for sound quality, and found them to be nicely rounded, with good stereo imagery and balance,. Not massively refined and the bass was a little boomy, but still pretty good.

Of course, they’re not built for long-term comfort for wearing, rather for continually pulling on and off your head. They are a DJ headphone, after all. The sound quality is up to the job for DJing.

These look, feel and behave as DJ headphones should. DJ headphones aren’t known for being subtle, and these are don’t break the norm, with their chunky styling, logo-emblazoned across the top, and chrome trims on the ear cups. They’re not as expensive as true pro ‘phones, and the compromise shows in the lack of real leather and the rather plasticky hinges. The latter point brings me on to my final observation: Durability. 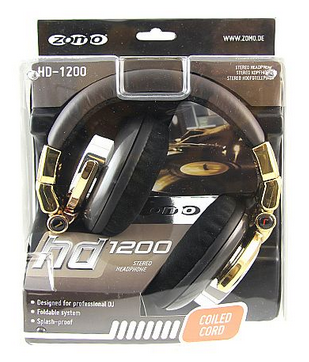 Having used these for only one set, I really can’t comment on how durable they are. In my experience, the hinges are the weak point in headphones made to this design, and I feel these will be no different, but that doesn’t mean for sure it’s the case with this model; only that I can’t tell you how durable they’ll be long-term.

Providing an extra pair of ear pads in the box is a nice touch from Zomo. Detachable cables are good for longevity too, as this is another weak spot in DJ headphones sometimes.

If you want the traditional DJ headphone look, but don’t want to spend top whack on a fully pro pair, you should definitely check the Zomo HD-1200 DJ Headphones out, alongside similarly featured and prices headphones such as the Numark Red Wave DJ headphones, which while they come with fewer accessories, are better value than these.

Finally, it seems that (unlike the Numarks, obviously – clue’s in the name) these available in all types of colour combinations, so if traditional DJ black / chrome / grey doesn’t work for you, get online and find a combination that does…