As comprehensively outed a few weeks back here on Digital DJ Tips, Native Instruments has a new product in its range: the Kontrol Z2 pro DJ mixer, which was officially launched today. Heading straight into Pioneer and Allen & Heath territory, the Kontrol Z2 is designed for the DJ booth, with a high-quality sound card, Innofaders, aluminium construction and standard profile sizing to fit flush with other pro gear..

While the mixer is laid out spaciously in a pretty classic “battle” style (think Rane’s Serato mixers), it is anything but traditional in its feature set. Here’s what it packs into its (rather understated) frame:

Clearly the unit is meant as the ultimate mixer for Traktor no matter what your workflow, and so in the box you’ll find not only the Kontrol Z2 mixer but a copy of Traktor Scratch Pro 2 and a set of control CDs and control vinyl.

It looks unmistakably “Traktor” with the lights and the design of those knobs and buttons, yet NI has stepped up the quality from the plastic controllers it’s so far released.

Without Traktor, the Kontrol Z2 is a high-quality two channel battle mixer, complete with hardware filters and a decent sound card for incorporating digital sources. But with Traktor it becomes sort of like a cross between the Pioneer DJM-T1 Traktor mixer and the Pioneer DJM-850 (but a two-channel version, the extra two channels being “pseudo channels” for control of Traktor Remix Decks etc.). Whether it gets adopted by clubs as their standard mixer is not something I’d like to bet on, but it’s certainly a statement of intent from NI.

It would make a great touring mixer for Traktor DJs, and of course would also be the perfect vanity product for home digital DJs. Combine it with a couple of CDJ-2000s or some turntables, maybe a Kontrol F1 and /or a Kontrol X1, and you’ve got (at least what NI would consider to be) the ultimate digital DJing set-up. 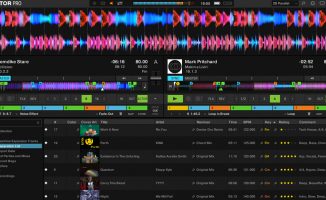