Due to my usual Vestax VCI-300 being off to the service centre for some TLC, I find myself currently using a borrowed Hercules DJ Console RMX controller using Virtual DJ 6 rather than my preferred Vestax VCI-300 / Serato ITCH setup. I thought I’d post a few thoughts after my first night using this equipment.

I turned up at the venue half an hour early to give myself time for a quick practise, booted up Virtual DJ (it’s my backup DJ software anyway, but I haven’t used it for months), downloaded and installed the Hercules RMX drivers, and plugged it in.

Having hit the config and set it up for the Hercules, it actually worked pretty much straight away. It isn’t anywhere near as intuitive as the Vestax VCI-300 / Serato ITCH combination, which isn’t surprising as that’s a custom pairing, but it was OK. The controls don’t send any Midi information until you use them though, so when I moved the master volume slightly, it jumped up in volume about ten-fold – a little scary but quickly corrected!

Some thoughts on the Hercules RMX – It’s actually well made like the Vestax VCI-300, if clunky. It is heavy, aluminium, and the buttons are built to last.

The jog wheels are horrible to use against those on the Vestax, and the Hercules has one or two bad design faults – for instance, the kills (which, by the way, I miss terribly on the Vestax) aren’t lit, so there’s no visual way of knowing when they’re on – but after an hour it was perfectly usable and I played my best set in that particular venue for a while on the thing, so thumbs up there.

There’s no spinning back or scratching on it (well, there is , but you won’t do it twice) as opposed to the Vestax which is great in this respect with its responsive, clever dual-purpose platters and high-resolution Midi. As befits a piece of hardware that you can get complete with bundled Virtual DJ for a third of the price, it just feels cheaper and less precise.

However, I have to say it does everything you need and it is great value for money. As, like the VCI-300, it has a built-in sound card (don’t expect pro quality but it’s OK), this means you can be up and DJing on a piece of kit that doesn’t make you look like you’re playing with a toy for a small outlay, and in that sense I’d recommend it to anyone thinking of dabbling in digital DJing but who doesn’t want to commit more funds.

(By the way, you can also plug decks or CD mixers into it too. Hercules 1, Serato 0…)

Virtual DJ was my preferred DJ software for years, but I have to say that against Serato ITCH, it loses out for me. I didn’t realise how much I’d come to love having Serato’s twin waveforms, big, chunky and in full colour to show the sound spectrum, to show me what’s coming in the next few seconds on my tracks. (With ITCH, the waveform – think the way tracks are shown on SoundCloud – has different colours for bass, mid and treble frequencies.)

Virtual DJ actually has very good waveforms, one for each track overlaid on each other in red and blue, and that was always one of the reasons I preferred it over Traktor, but Serato’s are better. The screen also locks every now and then, juddering a little, which makes it harder to use the waveforms for visual mixing. I am using a decent MacBook, so if it doesn’t run smoothly on that, it isn’t a processor thing.

It is harder to keep tunes in time with the Hercules RMX and Virtual DJ due to the lack of precision in the jogwheels and this lack of this superior visual confirmation. It’s not difficult, but just a little harder, which means a bit less time to do other things.

Also, the clear, clean, simple screen layout for Serato ITCH works better than Virtual DJ’s. And if you are DJing in the daytime, you’ll find Virtual DJ’s predominantly black interface harder to read than Serato’s.

Looks like I’ll be using this setup for a couple of weeks at least, so I’ll report back after having played a few more gigs on it if there’s more to add.

Have you got a Hercules RMX? Do you know a venue that uses one? How about the VCI-300? Or, are you trying to choose a DJ controller and weighing up your options? Hit us below with any queries or comments. 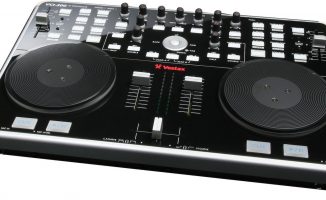 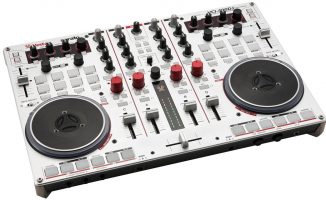 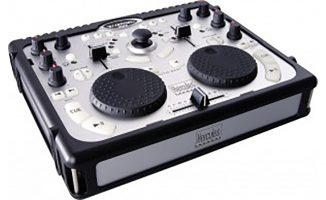