Ninja Tune, the legendary label formed in London 1990 by sampler pioneers Coldcut and home to The Cinematic Orchestra, Bonobo, Roots Manuva, The Heavy, Wiley, Coldcut, Amon Tobin, Toddla T, Fink and many more, has released Ninja Jamm – an iOS remix, re-arrange, and re-mangle app. How the app came to market is a story in itself (indeed, Matt Earp who was heavily involved in the development process, has written about it on CreateDigitalMusic) – but now it’s finally here, how does Ninja Jamm compare to other artist-based remix apps? Let’s find out…

Ninja Jamm is free to download and comes pre-packed with “Beats & Pieces 3” by Coldcut, a slight variation on the original versions with added samples throughout. Rather helpfully, as you fire up the app for the first time, you get a neat walkthrough of all the key features ensuring that you have at least understood what each part of the app does before you get going. The app is designed for the smaller iOS devices and works in landscape format, however, you could run it on an iPad in x2 mode if you have big fingers!

The track is split into five parts with eight loops per part. In general, the top line is for the drums, the second line for bass and then synth, keys or samples all slot into the other sections. Some sounds are not present on the original version of the track, but this is to ensure that all slots are filled – don’t worry though; they’re still in keeping with the mood of the track and perfectly on tempo too.

Using the beatgrid screen you can trigger the loops for each line and drop each line in and out of the overall mix using the buttons at the side. If you wanted to see how the original track is composed using these parts, then pressing play will run through the sequence for you – allowing you to change things along the way if you wanted to.

By pressing the grid button for a line, you get the waveforms for that loop displayed. Pressing on a section of the waveform will play that part back in a short loop (all still on tempo). You can press two squares on the waveform to loop between them. The five buttons along the bottom left of the screen give you access to the other screens where further sounds and fun can be had:

With the X-Y pad, you can use the gyroscope button (top right) to move the parameters over the 3D board which adds an interesting flourish. If you shake your iOS device during your remix effort, a stuttering effect is applied, again another unusual feature – remixing on the train this way may get you some raised eyebrows! Using the tempo button at the top right you can change the overall tempo of the track, a quick double tap on the tempo figure will return it back to normal.

Neatly, you can also record your session and upload it to SoundCloud. The recording is temporarily held on your iOS device, stored as a high-quality WAV file (which makes sense when the source material used in the app is all lossless AIFF format).

Perhaps in the future, the recordings could be available via app filesharing in iTunes when connected to a host machine, but the instant upload to SoundCloud is a neat cable-free way to go. During the upload to SoundCloud, you get a choice whether you want to inflict your remix on the public or keep it private. There’s also the option to shout about it on the usual social networking sites (Twitter, Facebook, Tumblr and Foursquare).

The app comes with one free track and a choice of eight other Ninja Tune tracks for download (at a cost of $0.99 each or as packaged bundles of four). There are plans to release a number of new tracks for download on a regular basis, I’m glad to see “Witness” by Roots Manuva among the planned releases too!

The choice to use large, high-quality formats as the source material is a wise one; the audio sounds crisp and I wouldn’t be afraid of plugging this into a mixer during a set to add some spontaneous creativity!

We’ve seen several other remix apps before, however, Ninja Jamm feels like the best and carefully thought out app so far. The choice of tunes obviously comes from the Ninja Tune label and they’re a personal favourite of mine, so clearly I’m biased! However there is the possibility to open the Jamm approach up to other labels in the future. In order to keep the app feeling fresh and to retain interest, Ninja Tune knows that more tracks will need to be added which is reassuring to know.

Ninja Jamm is another example of creative thinking; this is another way for us to consume the music we love, creating something new as a result. The artists receive a percentage from the in-app purchases, ensuring that everyone’s happy. Perhaps the only word of caution to Ninja Tune would be where a track features samples – not sure how the copyright applies to the distribution of source audio in this way. The app has only been on my iPod Touch for a few hours it’s already sucked my attention away from several other pressing things I should be doing. It’s great fun and addictive, so be warned! 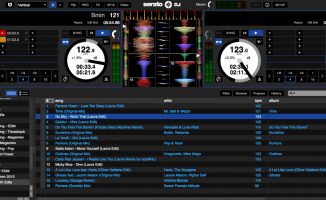 Over To You: Is It OK To Hide The Names Of My Tunes?