Until recently, Traktor’s Remix Decks could only be controlled with your trackpad & keyboard, or Traktor Kontrol F1 hardware. Since Native Instruments opened up the mappings for customisation in the last Traktor update, though, it’s been possible to control the Remix Decks with any external hardware you wish – as long as you’re prepared to work on a mapping, that is, which is by no means a simple task.

Enter the guys at the (rather unoriginally named) Digital DJ Tools website, who’ve come up with a mapping to let you control Traktor’s Remix Decks with your iPad, similar to the way the recently reviewed Serato Remote app lets you control elements of that company’s DJ programs. It’s called Traktor Remix Decks For Touch OSC (more naming brilliance there 😉 ). And it’s completely free – kind of.

You’ll need Touch OSC…
As its prosaic name suggests, it’s not quite as simple as the aforementioned Serato Remote. You’ll need Touch OSC, an app that turns your iPad into a wireless Midi control surface – you can get it here for US$4.99. You then load the free mapping into Touch OSC, to give you what looks like pretty comprehensive Remix Decks control, wirelessly and without the need to buy any new hardware (assuming you already own an iPad, that is).

It’s a pretty neat solution and I imagine it’ll be enough for many iPad-owning Traktor users who are curious about messing around with the Remix Decks but aren’t sure it’s going to become part of their workflow long-term and so who don’t want to shell out US$249 for the Traktor Kontrol F1 hardware just yet.

We’ve linked to their demo video below, and you can head over to their website to grab it – be aware that you need to register in order to get it.

Have you been waiting for someone to map the Remix Decks to the iPad? Have you tried this, and if so how did you find it? Please share your thoughts below. 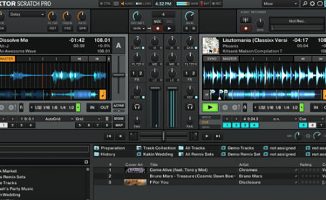 Serato To Traktor Pro: 10 Things You Need To Know