The death of the MP3 file format was “announced” last week by none other than its creators. They said that MP3 has been surpassed by better, more efficient formats, such as Apple’s AAC format, which is jockeying to become the de facto format for compressed music files (AAC is the default format whenever you rip a CD into iTunes, for example).

But if the MP3 is indeed on the way out, what does that mean for DJs? Should DJs change all their music into another format, like AAC? Are such users suddenly going to be left with a pile of unplayable files? What exactly do DJs with MP3 music need to do? That’s what we’re going to answer today.

Why were MP3s invented anyway?

Music files can be “lossy” like MP3s or AACs, or “lossless” like WAVs and FLACs. MP3 is a “compressed” file format for music.

But why compress music at all? Well, in the old days before high-speed broadband, folk connected to the internet using telephone lines – this was called “dial-up”, and the fastest connection speed available was at 56kbps (today’s standard broadband speed is 4mbps: that’s more than 70 times as fast!).

People wanted to transfer music files, but the file size needed to be much smaller than formats like WAV. After all, who wants to spend an entire afternoon downloading a single song? Compression was needed – thus, the MP3 was invented. It was wisely used and quickly became popular. So popular, in fact, that it turned the music industry on its head.

So… it’s now being predicted that AACs will replace MP3s. Both MP3 and AAC basically do the same job: they compress (or shrink) music into a much smaller file size compared to the original at the expense of some musical information. This information tends to be frequencies that you can’t really hear as readily, but their absence is what leads to a slight loss in sound quality.

While MP3 is still the most popular of the two, the AAC format is superior, so much so that a smaller 256kbps AAC file sounds just as good as a 320kbps MP3 file, which is the highest resolution possible in an MP3.

But as long as your music management software, DJ app, and DJ gear can handle both MP3 and AAC (and not only is that almost certainly the case now, but will be for the foreseeable future), it really doesn’t matter which one you use. It is certainly not worth converting from one format to the other (eg converting your MP3 collection into AAC) as this will simply result in slightly worse sounding files, for no gain.

What you may want to consider is to purchase your music on the AAC format from now on – this maximises hard drive space vis-a-vis sound quality. You can also start ripping your CDs into the AAC format instead of MP3, and if you really want the best sound possible on AAC, choose to rip them into 320kbps, which is the highest AAC resolution possible.

The bottom line is that it’s not the end of the world, and having a mixture of both in your music collection is fine. Just make sure that the MP3s you have are genuinely 320kbps, that AACs are at least 256kbps.

Even more important than that, always trust your ears: If tracks sound bad, they probably are bad, despite what the format might suggest. The flipside of that, though, is if they sound fine to you, and your gear can technically handle ’em, then go ahead and play ’em – whatever the format.

What are your thoughts on the “death” of the MP3 file? Will you start using AAC from now on? Or do you think lossless compression is the way to go? Share your comments below. 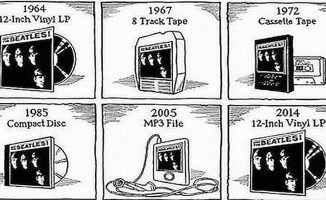