The Pioneer DJ DDJ-1000SRT is one of the hottest DJ controllers on the market and for good reason. It gives the standard Pioneer club layout to Serato users for the first time, allowing them to use a controller similar in feel to the DDJ-1000 for Rekordbox users, and therefore to club CDJs.

But prior to the release of the DDJ-1000SRT, Pioneer DJ had another killer controller in this price range: the DDJ-SX3. At the time of its release the SX3 was itself a big leap in features from its predecessor the DDJ-SX2.

The deck sections do however differ outside of the performance pad section. The DDJ-SX3 follows a more traditional Serato DJ deck section layout with Serato DJ effects controls for the three effects in each bank above each deck. The DDJ-1000SRT follows the CDJ style-layout with the looping controls found above the jogwheel.

The DDJ-SX3 added single knob per-channel effects, built in to the hardware, that Pioneer DJ calls “Sound Color FX”. These are four different standalone hardware effects that can be selected and used on each channel. These are controlled using what would normally be the filter knob on most controllers.

Instead, the DDJ-1000SRT has built-in hardware “Beat FX” which is what you’d find on Pioneer DJ’s more expensive club mixers. These include popular effects such as Echo, Delay, Reverb, and Spiral. The only way to access the Serato DJ software effects if you are using the DDJ-1000SRT is to either use a secondary controller or the mouse. Furthermore, even when you do activate them, they are not post-fader: A definite disadvantage.

One of the big selling points for the DDJ-1000SRT is the use of a mechanical-style jogwheel which is normally found on Pioneer DJ’s media players instead of the capacitive jogwheels the majority of controllers use, the DDJ-SX3 included. If you are used to capacitive jogwheels like the ones found on the DDJ-SX3 it does take a little bit of adjustment to get used to the feel of a mechanical jogwheel.

Dual USBs make it possible for seamless changeovers between DJs or for a laptop to be connected as an emergency backup. One of the biggest and most surprising changes from the DDJ-SX2 to the DDJ-SX3 was the addition of a second USB to allow for two laptops to be connected to the controller at the same time. The DDJ-1000SRT also has dual USBs to allow for two laptops to be connected. Both of these controllers are great choices if you end up playing a lot of gigs with more than one DJ playing for the night.

The DDJ-SX3 and DDJ-1000SRT both use the Serato DJ Pro software. It’s one of the most popular DJ software on the planet and for good reason. It’s feature-rich and has proven to be reliable over the years. Both the DDJ-SX3 and the DDJ-1000SRT do not require any additional purchases to access the full Serato DJ Pro software. Both controllers are simply plug-and-play and ready to go.

Apart from DVS compatibility, both the DDJ-SX3 and DDJ-1000SRT can be used as a standalone mixer too. So if you have media players or turntables, you can play those through either of the controllers without a laptop connected. This is a feature that I personally enjoy on any controller as I like to casually listen to vinyl on one of my turntables, and not having to bring out and set up a separate DJ mixer when I already have a controller out is a time saver.

While both the DDJ-SX3 and DDJ-1000SRT have two microphone inputs, they are handled differently on each controller. On the DDJ-SX3 you need to give up mixer channels. While this is nice because it gives you more precise EQ control on each of the mic channels, if you like playing with more than two decks in Serato DJ Pro you will not be able to use both microphones at the same time.

Both the DDJ-1000SRT and the DDJ-SX3 are great choices for controllers in their price range. Both Serato DJ Pro controllers have four channels, standalone mixer capability, dual USB, and one-knob effects. The two big differences between these two controllers are the types of jogwheel used on each controller and the ability to control the Serato DJ effects.

If you are interested in getting a more club-standard-like experience, the mechanical jogwheels and on-board hardware effects of the DDJ-1000SRT is going to be more appealing. If you enjoy the flexibility of the Serato DJ Pro software effects and are used and feel more comfortable with capacitive jogwheels, the DDJ-SX3 might be the controller for you.

If you were to get either of these two, which would you pick? Like the club-style layout of the DDJ-1000SRT, or do you like the hands-on Serato DJ FX control and mic inputs of the DDJ-SX3? Let us know below. 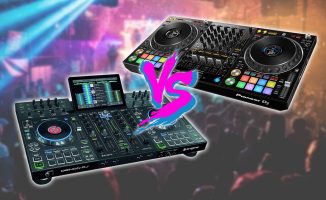 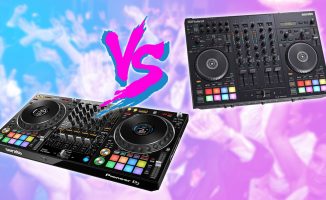 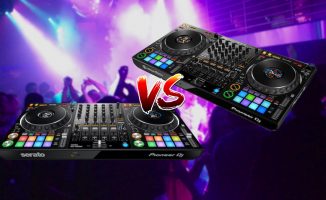 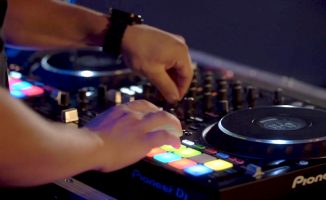 Out Now! Our New Course For Pioneer DDJ-1000SRT Controller Owners