So you have decided you want a “real” mixer, rather than going for a DJ controller or a standalone “all-in-one” DJ system.

Maybe you already own record decks or media players, or maybe you’ve used “separates” in the past and prefer the idea of having a DJ system made up of discrete items rather than everything in one box.

(After all, every single pro installation you’re likely to come across will have separates, so you’d be in good company if you decided this was the right route for you.)

But while there is a lot of choice – and there are a lot of price points – in the DJ mixer world, there is one fundamental difference you’ll need to understand right from the start, and that is the difference between “club” mixers and “battle” mixers.

What are “club mixers”?

A club mixers simply means a DJ mixer of the type you’d likely find in a club. Really, we can read “normal” or “standard” mixer here, because this is the type of DJ mixer you’re most likely to come across out there.

Designed for all-round, general use, it is the workhorse of practically every venue of any note, anywhere in the world.

Whatever the brand, any DJ will figure out how to work a club mixer in seconds – they’re a pretty standardised beast, with a feature set to suit all types of DJing and audio routing.

What are “battle mixers?”

A battle mixer is a more specialised type of DJ mixer. You can think of it as a “fork” from club mixers, that has been adapted to suit performance DJs specifically.

By “performance”, we mean DJs who compete – or “battle” (hence the name) to win competitions such as DMC, Red Bull 3Style and so on. Scratch DJs fall firmly in this camp.

As you’ll soon see, “battle” mixers (indeed, they’re sometimes also referred to as “scratch mixers”) have a number of distinct features included that club mixers don’t have – but an awful lot left off, too.

Another way of looking at the difference might be that the club mixer is a “road car”, but a battle mixer is a cut-down, revved-up version, designed for racing on the track – and for that alone!

So now we know the overall picture, let’s look at specifics:

Most club mixers have a minimum of four channels, meaning four separate “upfaders”, four separate sets of EQs, and so on. However, battle mixers always have two channels. Why? Because scratch performances use two turntables, by tradition, and so there is no need for the extra channels.

Conceptually, battle mixers always go for simplicity, because in the heat of performance, any controls at all that are not needed are likely to be obstacles – so two channels it is!

Even where a mixer can actually control extra channels (for instance, the Pioneer DJ DJM-S11 can control channels three and four in Serato DJ Pro), the extra music sources do not get their own physical channels – in this instance, they’re tucked away on the touchscreen.

2. Battle mixers have very little going on on their “bottom thirds”

Why is this? Well, we’re back to battle mixers always going for simplicity. As the crossfader is one of the main tools of attack for a battle DJ, it’s important that the DJ has easy access to it, and can use and abuse it without fear of accidentally hitting another control.

Once you’ve seen DJs moving the crossfader with elbows, noses, after spinning 360 degrees and so on, in some of the more energetic DJ routines out there, you’ll understand how important it is to have that part of the mixer clean and uncluttered.

It does mean that battle mixers can seem like everything is “squashed in” to their top sections, and also on the front plate, whereas with club mixers, all the controls tend to be on the top – and nicely spread out, too.

Scratch and performance DJing was always done on vinyl. But nowadays, it is nearly always done on software. That means that modern battle mixers tend to pack in a raft of software control features.

From pads for triggering hotcues and other things, to library controls for quick loading of tracks from software, even to software waveforms displayed on built-in screens, battle mixers can be as much “DJ controllers minus the decks” as straight-up mixers nowadays.

This is something you’ll never find on club mixers. Yes, the best club mixers are Midi mappable (meaning you could definitely control elements of your DJ software from them if you wanted), but they’re not designed for that, and do not have dedicated controls for software like most battle mixers do.

This is not least because club mixers are primarily designed to work with modern DJ media players, which by contrast to the turntables preferred by scratch DJs, come with a whole host of controls for controlling software should the DJ so desire, meaning even if the DJ is a laptop DJ, such controls aren’t really needed on club mixers.

Battle mixers live or die by the quality of their faders. Again, this is because to a scratch or performance DJ, the faders have to be spot on. They have to be loose (especially the crossfader), “buttery” and just generally “feel right” in order for performance DJs to get the best from this type of mixer. Hence, a lot of money and effort is put into getting them right.

There are actually companies who specialise in making faders for mixers (Innofader is a leading one), although nowadays the big battle mixer manufacturers tend to have their own in-house faders, of equally high quality.

This attention to detail usually goes as far as the channel faders too – and it is normally pretty simple to swap all of these faders in these mixers, as well.

Now, the quality of fader in club mixers isn’t bad per se – it’s just that the priority isn’t there so much with this type of mixer, as the more “standard” faders usually fitted will do the job fine for the vast majority of DJs.

Most DJ mixers of all persuasions nowadays have a “smooth” or “sharp” setting for the crossfader, which decides whether it acts like a switch, or like a smoother, gradual fader between the two channels. (Scratch DJs need it to be like a switch.)

But battle mixers take this much further. You’re likely to get more granular control over this particular parameter (often via a knob rather than a switch between two extremes), as well as similar controls for the channel faders.

You’re also likely to have a switch that reverses the crossfader (so-called “hamster mode”), and there may even be adjustments for how tiny the area is to the far left and right of the crossfader’s range of movement where only one deck is audible. Everything you could think of tends to be covered with battle mixers.

Effects on club mixers come in two flavours: Effects controlled by a knob under the EQs for each channel (traditionally a filter, but nowadays often there are other choices here too), and a master effects section where you can apply effects tied to the BPM of the music, such as echoes.

But on battle mixers, it’s very different. You usually still get the filter effect on a knob near the EQs, but you also usually get two great big paddles right in the middle of the mixer.

With these, you choose a single effect (either one built-in to the mixer, or an effect from the attached software), which then works on both channels via the paddles. Push a paddle up to “lock” the effect on, pull it down to apply it momentarily (when you let go of the paddle, it springs back to the middle).

This is simpler than the way effects work on club mixers, and much more “immediate” – again, it makes them easier for performance DJs to access quickly and with minimum fuss. The trade off is you get fewer effects, and less overall control.

With battle mixers, you tend to get a small, horizontal fader to achieve the same, like a tiny crossfader for the headphones only.

Again, the reason for this is speed and simplicity – it is two button taps to turn the cue button off for a channel you no longer want to hear and turn on a channel you do with a club mixer, but it is just one flick of a fader to achieve the same with battle mixers.

So which is right for you?

Now you know the differences (and there are others – for instance, good club mixers have digital inputs, which you don’t see on any battle mixers to date), you hopefully won’t ever look at a DJ mixer again without immediately realising which type of mixer it is.

But that still leaves the question: Which is right for you?

For most people, a club-style mixer will be the right choice. These mixers are more versatile, offer more channels, usually have a wider range of effects, and the money you pay has been spent sensibly across all of their features.

And yes, of course you can still scratch using them – just fine (many scratch DJs are OK using club mixers when performing, even if they wouldn’t be their first choice).

Read this next: Platters vs Jogwheels – Which Is Best For DJing?

Another good reason for owning a club mixer over a battle mixer is that you’ll be more at home quicker when you go to play in a club – as I say, they’re pretty standardised.

But if you know that battle, performance and scratch DJing are your primary reason for being a DJ, then it would make sense to specialise and think about going for a scratch mixer. What you lose in flexibility you gain in having a tool that is specifically tuned for the job.

(And yes, you can DJ “normally” just fine on these mixers too, assuming you aren’t going to be using more than two channels – which is around 80% of DJs.)

Take your time to read and watch the reviews of all of the mixers mentioned in this piece, here on Digital DJ Tips, before you make a purchase – and when you have, why not consider getting the course to go with your mixer, too?

The Complete DJ Course – Covering gear, music, techniques, playing out, and promoting yourself, this course is the perfect accompaniment to your new club mixer

Scratching for Controller DJs – The perfect course for learning to scratch using digital DJ gear, taught on a whole range of equipment, including battle mixers

Finally, if you have any questions about battle mixers vs club mixers, please ask them below – my team and I will be more than pleased to help. 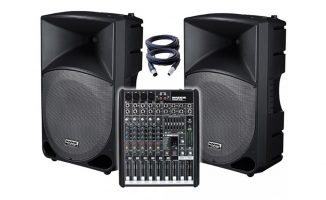