Ah, the two-channel mixer. Once an absolute staple of any DJ’s gear alongside whatever turntables he or she could afford, it’s kind of fallen by the wayside for many people in this digital/controller-led world. But for all kinds of reasons, at some point, many DJs decide they want a mixer – and for a good proportion of those, a decent two-channel mixer will be plenty to suit their needs.

Enter the Xone:23, Allen & Heath new entry-level mixer to replace the ageing Xone:22. It’s styled like the Xone:DB2 and Xone:DB4 high-end mixers, and has a few features that you’d only expect to find on modern mixers (such as dual 1/4″ and 1/8″ headphone sockets, for example), but at its heart it’s pretty much what you’d expect a two-channel Allen & Heath mixer to be: Well built, with all the features you need in such a device, plus a couple of twists. So let’s look a little closer…

In the box, you’ll find alongside the mixer unit a couple of IEC (Kettle-style) leads (in our case, a European and a UK one), a transformer, and an instruction manual. I was disappointed that the transformer wasn’t built into the mixer itself, as it’d have been one less lead to worry about and neater. The unit is compact and modern looking, with top and bottom lips to allow it to be easily screwed into a case or flush to a surface. However, the headphones sockets are on the front, not the top, so you’d have to bear that in mind when doing so.

It’s a two-channel, four-input mixer, finished smartly in metal, with the “Allen & Heath” logo large on the sides, and the “Xone” logo on the front. It has two phono channels and two line channels. Instead of being switchable, they have small input gains at the top of each channel, so you can have four inputs playing at once if you like, although obviously the EQ, filtering and overall mix will then be governing two things at once. Still, it’s a nice development over the simple “either/or” switch usually found on such devices. There is an internal “hack” to switch the phono channels to extra line channels; in this instance, I feel a switch would have been better on the back somewhere, as opening up your mixer with a hot soldering iron in your hand isn’t my idea of fun.

Each channel has full-kill three-band EQ, a reasonably stiff upfader, and buttons for turning the filter on and off and for headphones cueing. Pressing the cue button for a channel switches the nine-bar master VU meter to that channel to let you set your input gains correctly, and there are headphones level and cue/mix controls, but no split cue.

The crossfader is reasonably loose but can be switched for an Innofader easily if required for better scratch performance. There is a switch for smooth or sharp crossfader curve. The mic channel is XLR only, with two-band EQ and a level control, and the mic connects on the top panel. There are separate output pots for master volume and booth, and as well as master (XLR only) and booth/record outputs (both RCA), there are RCAs for an FX send/return loop for plugging in an external FX unit, for which there is an on/off switch on the top panel. However, this would then covers the whole throughput; you can’t select which channel it is to work on.

I’ve left the best till last: The VCF filter section, an Allen & Heath trademark. The bad news first: There’s only one filter, so it can simply be switched on or off for each or both of the channels. The good news though is that it’s got both a resonance control (“mild” to “wild”) and an adjustable HPF/LPF cut-off control, deciding at what frequency the filter cuts off or lets sound pass, depending on whether you have the HPF or LPF switch pressed.

There’s no “set up” as such, as it’s an analogue mixer, so you just plug all your inputs and outputs in, hit the power button round the back, and you’re away. On plugging in, the filter buttons light up blue, the cue buttons and FX loop button are red, and the HPF/LPF buttons are yellow, giving it a modern “digital” feel.

I set it up with a Traktor Audio 2 sound card and Traktor running on my laptop in External mode, sending one deck to the left-hand channel of the mixer and one to the right. If you had an Audio 10, for instance, you could route all four decks through the mixer using the aforementioned hack, but in the set-up, I just described, maybe you’d have an X1 and an F1 to complete it. Anyway, for testing purposes, this did me fine. At home, you may want to use it with DVS, with analogue and digital ins… lots of choices.

The VUs are great. As mentioned above, pressing “cue” puts the VUs in cue monitor mode, and they have very clear green, yellow and a single red to show peaking. When the cue buttons aren’t lit, the VUs show an aggregate level of both line faders, independent of the master out; this makes sense for recording, and also for the fact that anything the mixer is plugged into ought to have its own peak meter to show you if you’re pushing it too hard.

The filter in practice is a lot of fun to use and you don’t actually miss not having two filters; I realised I don’t ever use more than one filter at once in my DJing anyway, and actually a benefit of having a simple filter on/off switch is that you can do an increasingly “wilder” filter effect, then return to “flat” instantly on a beat at the touch of a button, something not possible with a filter solely controlled by a knob as most “omnifilters” nowadays are.

There’s not really too much else to add: It performed exactly as you’d expect a two-channel mixer too with no surprises. As predicted the filter is addictive, the headphones volume was nice and loud… and that’s about all you need to know about using the thing.

If you like Allen & Heath and want a budget mixer, then really your choice is between this and the Xone:23C, the latter having a built-in sound card. The advantage of going down that route is the (unlike in the accompanying talkthrough video) you won’t need an external sound card for adding a couple of digital channels, but the disadvantage is that if you ever want to use it with a Traktor or Serato DVS, you’ll need one of their sound card anyway, and as the Xone:23C doesn’t have a sound card licensed to either of those set-ups, it’d be redundant.

Overall, the filter (albeit that there’s only one) is definitely the selling point of this mixer – that, and the versatile two gains for each input on the top meaning it is really a “2 + 2 + mic channel” mixer. The quality won’t let you down, and it’s only the niggle about the external power transformer that I think could have been done better – that, and the soldering iron hack to turn two phonos and two lines into four lines. Still, overall as far as analogue two-channel mixers go, it’s a good’un.

Do you own the Xone:23? What do you think of it? Anything that could have been done better or differently? Please share your thoughts in the comments. 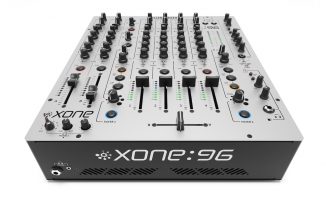 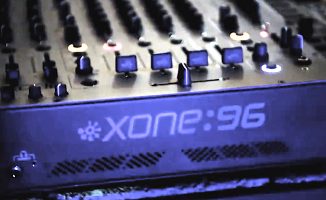