Captain Plugins is a suite of music production helpers for your DAW. It’s designed for both beginner and advanced DJ/producers who want to make tunes or need help coming up with ideas for fleshing out productions quickly. It’s a fantastic collection that should be in every DJ/producer’s plugin library. Currently there are plugins specifically for creating and jamming out chords, basslines, and melodies, plus a tool that turns your computer keyboard into a piano keyboard capable of playing notes and chords that are tied to a specific scale for easy producing. Highly recommended.

Captain Plugins comes from the same creators of “helper” DJ apps liked Mixed In Key and Platinum Notes, which help you build playlists and tag / tidy up your DJ library, along with Odesi, which is one of our favourite apps for DJ/producers. Odesi is like a musical sketchpad, allowing you to easily build and capture music ideas that you can then flesh out later in your chosen digital audio workstation.

Captain Plugins takes the concept of Odesi further by introducing a collection of plugins that specialise in helping you with quickly come up with chords (Captain Chords), melodies (Captain Melody, Captain Hook), basslines (Captain Deep) and beats (Captain Beat). Think of each of these plugins as “production aids” that speed up your composition and idea-generation workflow – kind of like Odesi on steroids for each individual aspect of the production: drums, chords and melodies.

Captain Hook and Captain Beat are still in development at the time of this writing.

I downloaded Captain Plugins to my laptop, fired up Ableton Live, activated the plugins and got to work.

Captain Plugins are used within your digital audio workstation. The way it works is you add a Captain Plugin of your choice into an empty track that can receive Midi data (such as a Midi track in Ableton Live). Once open, you can then use your computer keyboard or a Midi controller to jam out ideas depending on which Captain Plugin you’ve added.

The cool thing is that all the Captain Plugins work with each other, meaning they all sync to the same musical scale that you’ve set as well as the tempo. For example, if you’ve added Captain Chords to a track and picked the A minor scale, all other Captain Plugins that you add after that will sync to that musical key making it a breeze to add layers of more chords, basslines and melodies.

Each of the Captain Plugins has a tabbed menu that lets you build up to four types of song sections: Verse, Pre-Chorus, Chorus, and Drop. Once you’ve picked / written parts for the song sections that you want, you can then drag and drop the Midi data over onto your track. You can then pick another synth or plugin instrument to play those Midi notes, for example if you want to use it with a plugin like Massive from Native Instruments or Serum.

It’s a brilliant idea that sounds good in theory and works so well in practice – You can use any of the Captain Plugins to come up with an idea using their stock library of sounds (which sound good by the way), and once you liked it, just drag and drop into your tracks for more tweaking later on.

Native Instruments’ Maschine has the same workflow, but it’s quite fiddly and can be a total headscratcher for beginners just getting to grips with producing. Not so with the Captain Plugins – they’re designed with both beginners and advanced users in mind so everything works well and is devilishly easy to use. 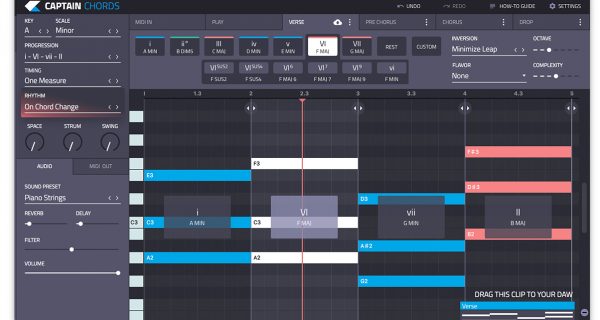 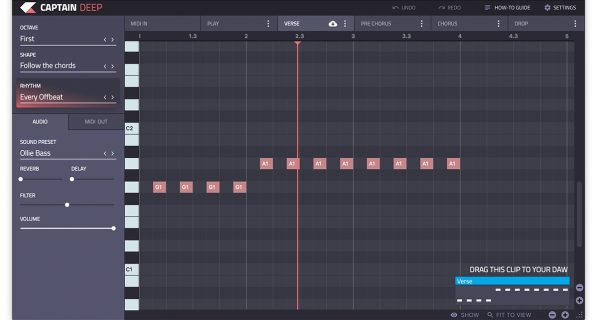 Captain Deep is the plugin for creating basslines. Just like Captain Chords, you also get tons of bass presets that sound fantastic, and you’ve also got access to common bass patterns used in various styles of music: you can adjust the octave, “shape” and rhythm of the bassline, plus you can also use your Midi or computer keyboard to play your own bass melodies. 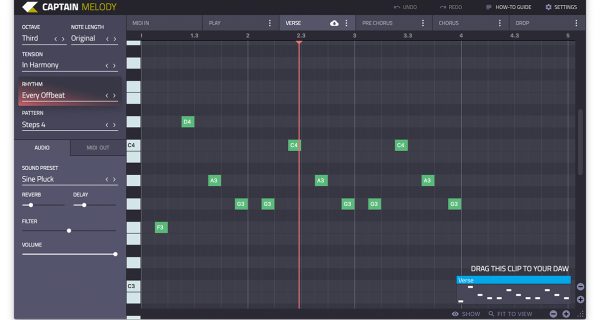 Captain Melody is similar to Captain Deep in that it’s got patterns that you can use for creating melodies, but this time for leads or arpeggios. It’s also loaded with sounds, presets and other bits that you can tweak to create the perfect lead melody for your tune, or something to accompany a vocal. 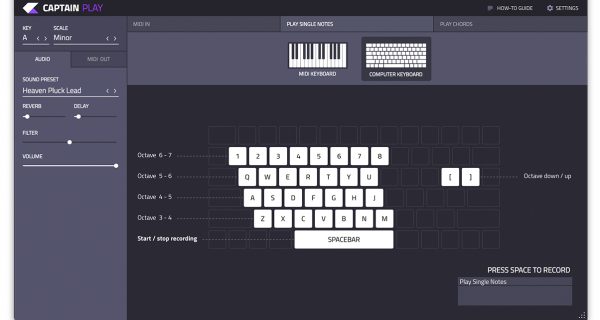 Captain Play basically takes the Midi / laptop keyboard performance tab of Captain Melody and Captain Chords and fuses them into one plugin that you can use either for playing melodic parts or for easily playing chord triads within a scale using a single key.

Overall, Captain Plugins is an essential tool for any DJ/producer. It’s a great aid for beginners who are just learning music theory and would like to know how certain chord progressions sound and how melodic patterns are made, and it’s also a fantastic tool for professional music producers who need results fast and with a minimum of fuss. There are other plugins in the market that aim to help you come up with melodic ideas and progressions, but none are as intuitive, simple and great-sounding as Captain Plugins. Highly recommended for DJ/producers and music composers of all styles and skill levels.