Odesi is a DJ/producer’s composition sketchpad. It’s like having access to a hitmaking playbook: You can select a formula and patterns, and then add your own spin to it in your favourite digital audio workstation. Great for those who produce in a DAW and already know some basic music theory – it’s a fantastic song idea generator, and the just-added Magic Keyboard feature makes laying down melodic sketches even easier. Highly recommended.

Odesi is an app for Mac and PC that works as a “music sketchpad”. The idea here isn’t to create full-on productions, rather it’s an environment optimised to help you come up with musical ideas quickly, whether that’s through a bassline, a lead melody, or even a simple chord and rhythmic passage. Odesi ships with tons of chord progressions, drum loops and sounds that you can dial in straight away.

Odesi is also available “in-browser”, meaning you can access it using a browser like Chrome or Safari, but you don’t have access to all its features (for example, you don’t most of the high quality sounds and patches that the app version provides).

The first time you fire up Odesi, there’s a demo song to check out if you want to see and hear what a finished project looks like. I made my own by clicking on Create New Project, and got started.

Odesi looks like a digital audio workstation’s Midi editor window: You start out with a blank grid in the middle of your screen, and you’ve got a piano keyboard to the left (seven octaves, which we’ll get to in a bit) and a set of drum sounds below it.

This is all pretty standard stuff, but what sets Odesi apart from everything else out there right now can be found to the right of the screen: Here you’ve got the Chord, Melody, Bassline, and Drums tracks. There is also an Acapella/Audio track that you can use to import an audio file, say if you’ve got a vocal file for a song that you want to remix. There are five tracks set by default, and you can add and remove as needed.

When you click on Chords, you can choose “Add Chord Progression”, and now you’ve got four bars of the grid filled out with a chord progression, which is a sequence of chords within a scale. You can click on Lock which prevents changes, Hide to make the notes within a track disappear, and Solo to hear the track by itself.

You can choose a chord progression from Odesi’s list (85 progressions in total) based on the musical key that you’re working in, which you can select at the top of the screen. You can also adjust the tempo or BPM of your project to suit the music you’d want to produce.

Same with the Bass and Drums layers, you can choose from different popular patterns for both instruments. This is especially handy if you aren’t familiar with arranging drum parts and bass lines, because there are just so many different methods to go about creating them.

Plotting bass parts, for instance, can be a challenge for both novice and intermediate producers just because there are so many ways to do it, depending on the style of music that you’re producing and the type of sound you’re going for. The cool thing about Odesi is that it presents a variety of “usable” (ie ear-friendly) ones to you, minimising guesswork while teaching you how basslines can sound in the process by exposing you to different bass patterns. For a DJ/producer, this alone is worth the price of admission because it can save you hours, days, weeks, months, even years of trail and error searching for the right melodic fit for your tunes.

There are also a handful of patterns for the Drums track, which you can add in to quickly fill out the rhythm portion of your musical sketch (lots of “four to the floor” options here too for different dance music styles). If you want to pencil in your own drum patterns or edit the existing ones, you can just click on “Add Drums” and then “Edit to Midi” to do this. 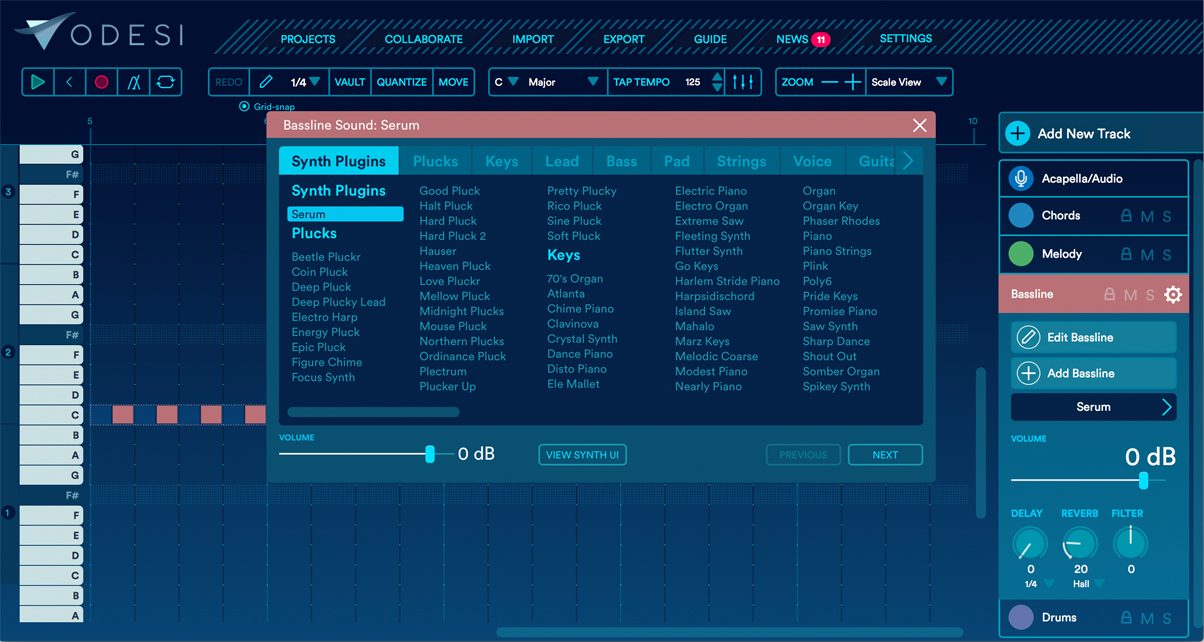 One of the coolest things about Odesi is that it’s packed with decent sounds for your sketches from the get-go. Leads, pads, plucks, keys, basses, guitars… the Odesi library has got tons of awesome patches for you to use, and it can even host soft synths (eg Sylenth1, Serum, Massive) so that you can recall your favourite patches for use in the app. 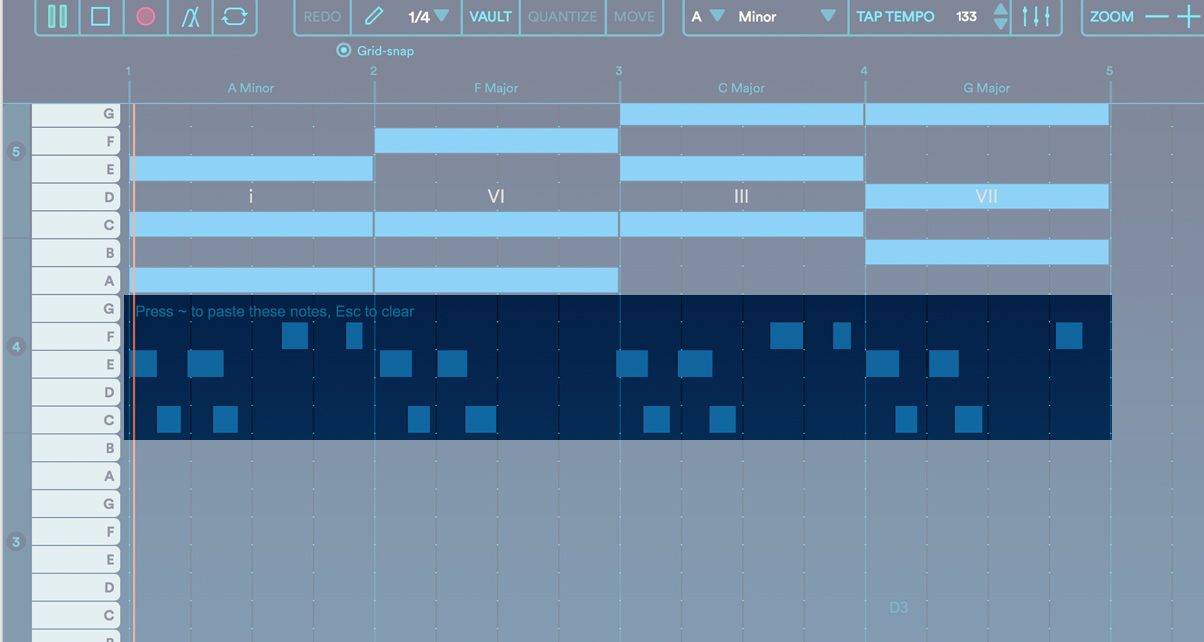 The Melody track is where you can write your own main melody by drawing on the grid or using your computer’s keyboard to play notes. You can draw and edit notes in Odesi by using your mouse, but a quicker (and more fun) way to do it is by using your computer keyboard, which turns into a three-octave keyboard, the notes of which are dictated by the musical key of your project which you’ve set.

This is good for two reasons: one it means that you don’t need a deep understanding of music theory in order to create melodic lines that will sound “correct” in your tune, at least as far as theory goes. Two, this also means that you’ll never play a note that is “off key” or not in the musical scale that you’ve chosen.

As you play a melody or bassline using your computer keys, Odesi automatically loops once you get to the end of your progression. This means that you can “jam out” until you come up with something you like. When you do, all you have to do is to press the “~” key, and Odesi will commit those Midi notes into your project. If you don’t, Odesi will just overwrite them until you create a batch of notes you’re happy with. This is called the Magic Recorder feature, and it makes noodling and messing about, which are parts of the creative production process, easier.

Once I was happy with my four bar composition, I just clicked Export Project, which exported it as a Midi file (you can also choose audio if you want, for sending as a demo to someone you’re collaborating with). I then imported the Midi data into Ableton Live as a new project, dropped in my choice synths and drum sounds, and had the beginnings of my next floorfiller… all in a matter of minutes!

There are no hard and fast rules when it comes to music production, but there are some musical guidelines that you can follow in order to make dancefloor-ready tunes, and Odesi can show you the way in an easy-to-understand manner. It does require a basic understanding of music theory (eg what scales are, how chords are made) but that’s essential knowledge for just about any music producer, and you really should at the very least know what music notes are (ie pitch and rhythm values).

This is not a DAW in itself folks, and if you aren’t familiar with how a DAW works, you’ll want to learn one first (Ableton Live is our recommendation), especially since the workflow, interface, and basic commands here are quite similar to a DAW.

Once you’ve cleared these two small hurdles, you’ll find an immense amount of creative possibilities using Odesi. I’ve been using it a lot this year, and I’ve already got a ton of great ideas to flesh out in Ableton Live. The coolest part here is I don’t have to go googling for “popular chord progressions” or “dance basslines” and stuff like that – there’s so much here already, plus I can audition them one by one to instantly know which one I’d like to use. It’s like having access to a pop producer’s hitmaking playbook: You can select a formula, and then add your own spin to it in your favourite DAW.

The clearest analogy of Odesi I can think of is a writer’s pad that you take with you – in it you write ideas, concepts, and thought experiments for later processing when you get to your main work desk. It’s the starting point for potentially great work which you’ll be filling out later on.

Rare is the tune that gets composed, fully produced, and mixed down in one sitting – you’re more likely to spend several sessions writing the main progression and melody, choosing synths, crafting sounds, and so on. Each process has its own set of tools, and as a result, you may find yourself using Odesi for your songwriting more than you initially thought – I know I am!