The Pioneer DJ DJS-1000 is a grid pad sampler and sequencer for live performance. It reimagines Pioneer DJ’s own TORAIZ SP-16 for the DJ booth, and repackages it in a form factor and layout that aims to be more DJ-friendly, and it is able to do this on the whole though at times it falls short – the workflow is still quite complex and can be confusing for more traditional DJs. Having said that, the pitch fader and nudge controls alone are enough reason for DJs to choose this over the Toraiz SP-16, plus the CDJ-style housing makes it easier to set up in just about any club or festival DJ box. It isn’t game changing by any means, and this will unlikely change how 90% of DJs will be spinning, but if you’re a club or touring DJ/producer looking to integrate more live performance and looping elements in your sets, this should be on your shortlist.

The DJS-1000 looks like a drum machine squeezed into a CDJ’s body. You’ve got 16 RGB-backlit velocity-sensitive pads in the centre of the unit which feel stiff and chunky – great for pad mashing and finger drumming. To the right of the pad grid is a CDJ-style pitch fader with Nudge controls for manual beatmatching since there isn’t a jogwheel in sight on this unit. Over on the left is a multi-purpose touchstrip that can be used for pitch bends and rhythmic note repeats (more on that later). You’ll also find transport controls and a Level FX knob here, along with a button for turning it on or off.

At the top of the unit is a 7″ touchscreen with a browse knob and menu buttons similar to what you’d find on a CDJ-2000NXS2. There are eight rotary knobs below it, the parameters of which are determined by what’s shown on the touchscreen. To the left of the touchscreen is a USB socket for plugging in a thumb drive – you can load and save sounds and projects through this, or you can connect the DJS-1000 to your laptop with a USB cable to transfer files to its internal storage.

At the bottom is the Step Sequencer portion, which consists of both step and pattern buttons. You use this if you want to “program” a sequence or passage of music, which is how classic drum machines like the Roland TR-808 was used. 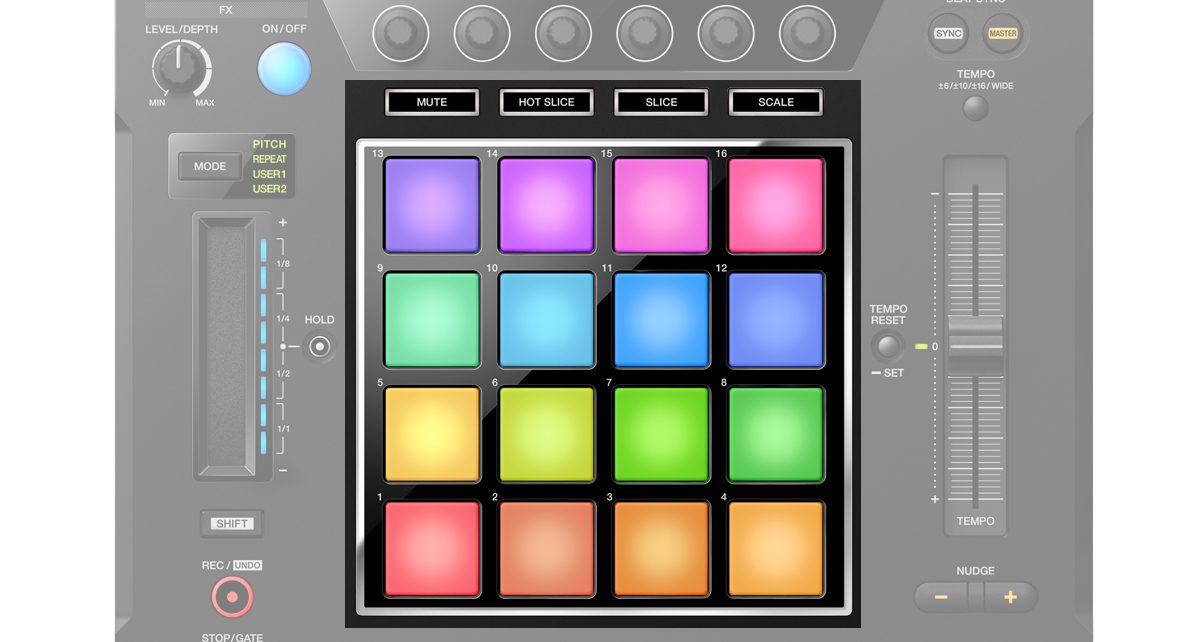 The DJS-1000 has 16 velocity-sensitive, RGB-backlit performance pads. They’re stiff and have a good action to them – something that’s to be expected on a drum machine or sampler. The pads are similar to what you’d find on the Toraiz SP-16.

There are four performance pad function buttons at the top of the pad grid: Mute, Hot Slice, Slice, and Scale. Mute lets you turn specific pads on or off – this is great for killing specific drum hits or loops (eg for removing kick drums during a breakdown). Hot Slice is for triggering certain portions of a loop or sample – the sound is spread across the 16 pads, and each pad triggers a different “start” point in the audio, which then plays until the end. Slice is similar, but instead of playing an audio file until the end, it only triggers a portion of it.

Finally, Scale lets you use the pads to play a chosen sample in 16 different pitches – great for playing lead or bass sounds on the fly. 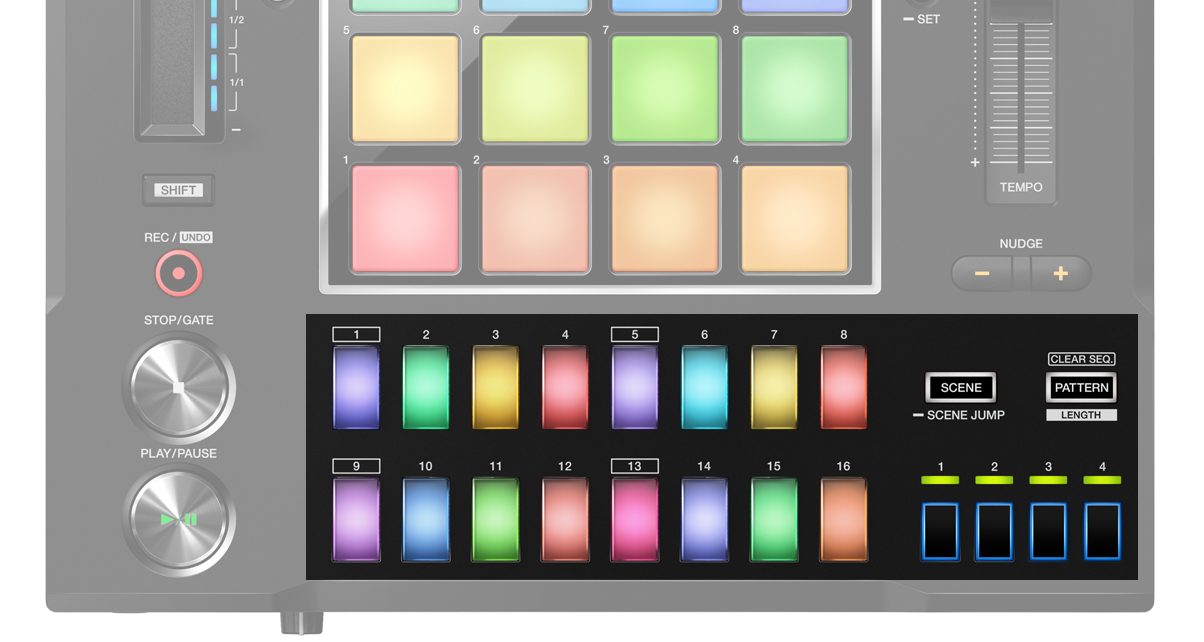 Below the pads are 16 buttons – these are the 16 “steps” that you can use to create a sequence (they correspond to 16th notes, that’s why there are 16). The way you add a sound is to first select the pad of the sample or loop you’d want to use, and then you use the step buttons to add an instance of that sound in the sequence. If you hit the play button, you’ll see a light go from left to right – this is the playhead of your sequence, and if it passes through a step sequence button that you’ve placed a sound in, that sound plays back. 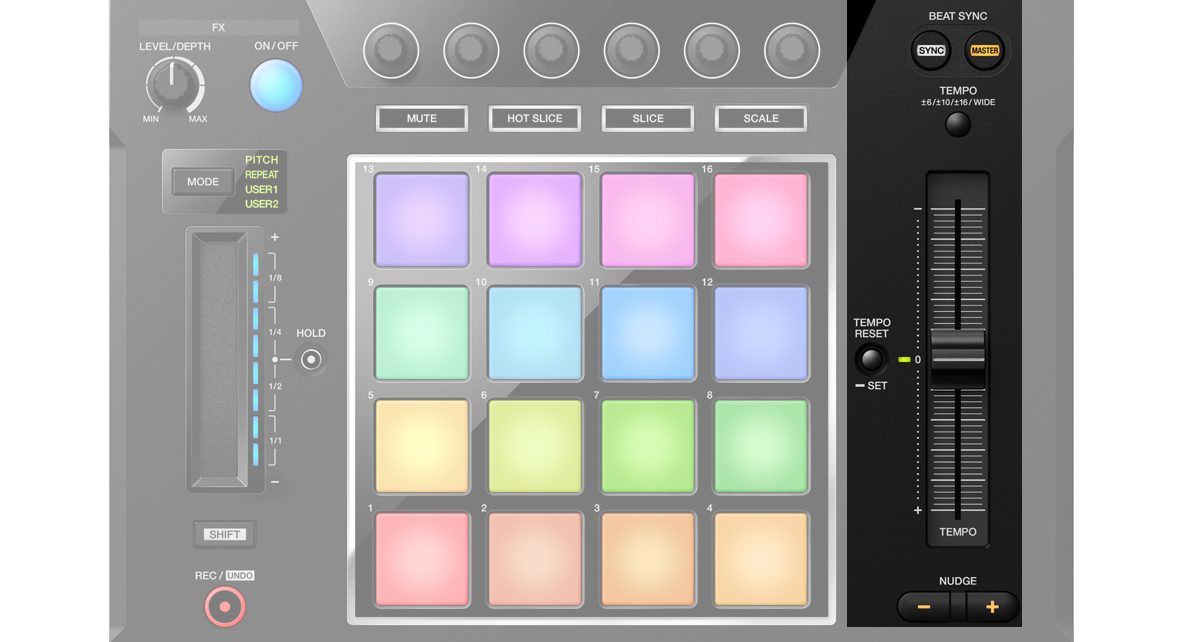 The DJS-1000 comes with a pitch fader on the right of the unit, just like what you’d find on a CDJ / XDJ media player. It has a Tempo select button that you can use to choose from among four pitch ranges: +/- 6, 10, 16, and Wide. You also get a Tempo Reset button, which disables the pitch fader and brings the tempo back to the song’s default speed. 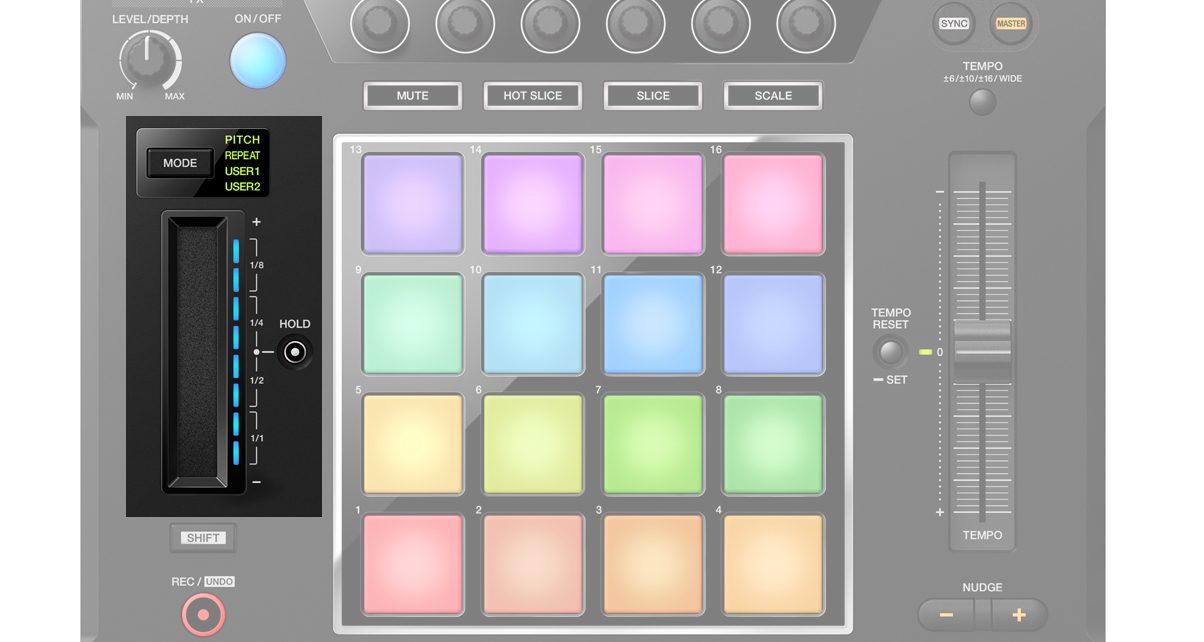 On the left side of the DJS-1000 is a touchstrip with four modes: Pitch, Repeat, User 1 and User 2. Pitch lets you use the strip to make momentary pitch shifts up or down when triggering a pad, while Repeat lets you create repetitions of a pad’s sound in different note value increments (from a whole note up to an eighth note). A Hold button is positioned beside the strip if you want to retain that pitch shift or note repetition without having to press the touchstrip. 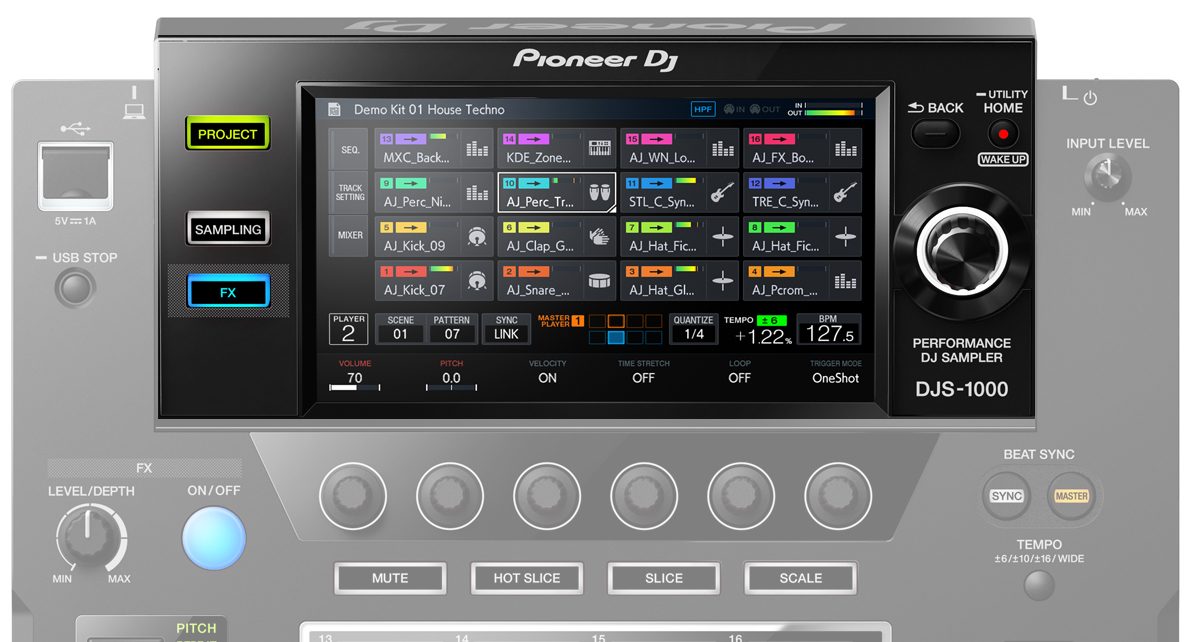 The DJS-1000 has a 7″ touchscreen at the top of the unit, just like what you’d find in a CDJ-2000NXS2. You use it to assign loops and samples to pad by double tapping on any one of the 16 icons. You can then browse either the internal memory of the DJS-1000, a connected USB drive, or your laptop that’s connected to the unit.

Below the touchscreen are eight knobs that can be used to modify parameters that show up at the bottom of the screen, which change depending on what menu you’re accessing. 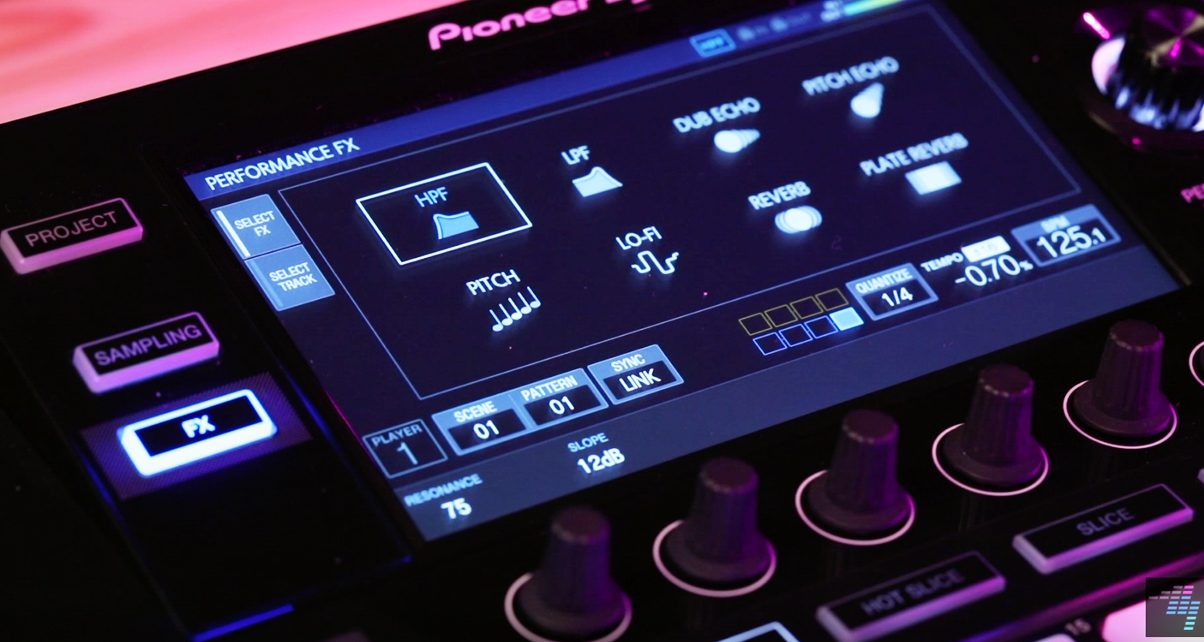 There are eight Performance FX on the DJS-1000, which are accessed by pressing the FX button and choosing via the touchscreen: High Pass and Low Pass Filter (like what you’d find on a DJM mixer), Dub Echo, Pitch Echo (similar to Spiral), Pitch, Lo-Fi (aka Crush), Reverb and Plate Reverb. All the DJS-1000’s effects are processed internally, unlike the Toraiz SP-16 which has a separate Dave Smith analogue filter section onboard.

The effects are quite basic in that you don’t have a lot of parameters to tweak once you’ve selected an effect: for example, the Plate Reverb effect only has Room Size and Damping controls. These are intentional decisions made by Pioneer DJ – it doesn’t want to muddle the experience with too many menu pages and settings decisions. After all, this is something meant to be used “in the middle of a mix” as opposed to in the studio.

Initially I would’ve appreciated having two FX knobs onboard (there’s only one), and then I realised that you are going to be using this with a DJM mixer anyway, and that’s probably more than enough effects for you to mangle during a performance. 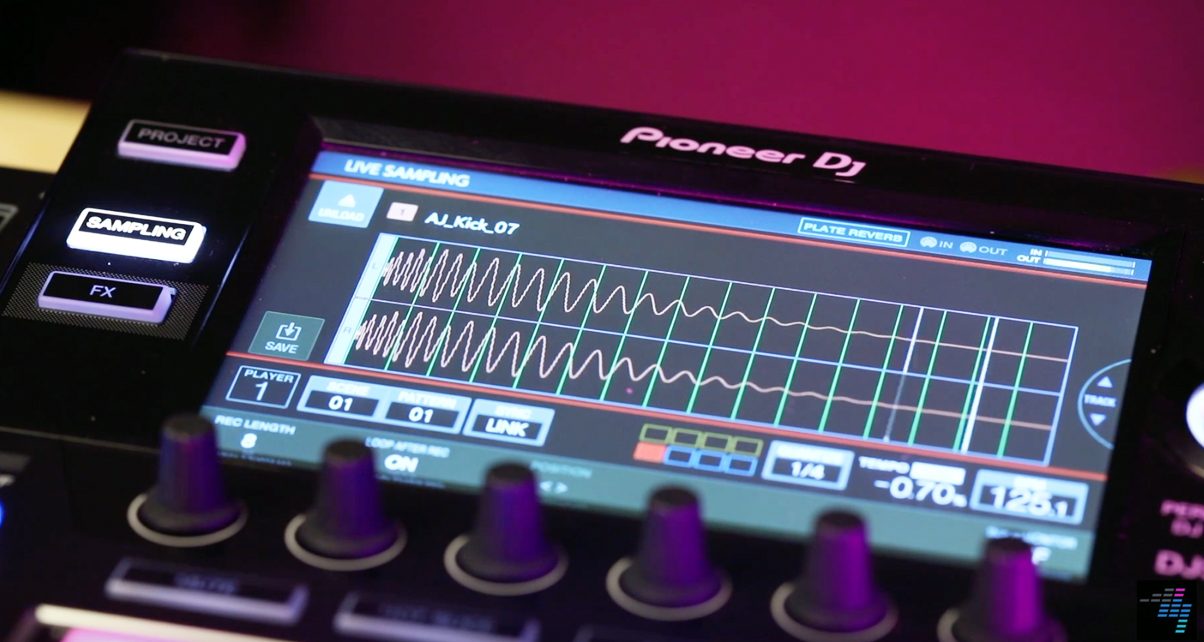 The DJS-1000 is a sampler because it lets you record, or “sample”, audio that’s being fed into the DJS-1000’s inputs – you can connect a line level device straight to it, or connect the Sends output of a DJM mixer to it. That means you can route audio to the DJS-1000, whether that’s a CDJ, a synth, an instrument, or even a turntable.

Once you’ve got something connected to it, you press the Sampling button on the top of the unit, and you can press on one of the performance pads to begin recording the sample. Pressing the same pad again stops recording, and you can do further editing on the DJS-1000’s screen such as shortening the sample, changing its pitch, and so on. You can then save this as a part of your project.

Pioneer DJ set out to create a familiar loop player / sequencer and sampler for DJs that can easily be set up and used in a standard DJ booth, and in theory it has done just that. By shoehorning the powerful and complex Toraiz SP-16 into a CDJ shell, the DJS-1000 gains a recognisable layout and shape that’s less intimidating than the SP-16 at first glance. Sometimes, this is all that’s needed to get a hesitant DJ to embrace the unfamiliar and just go for it. However, and this is crucial, there’s more to effectively using the DJS-1000 than just diving in headfirst.

There’s a reason why CDJs are the current kings of the DJ booth – DJs embrace simplicity. Sure, we love twiddling knobs and messing with effects and so on, but at the end of the day, “traditional” DJing is about picking songs and programming them one after another in a way that makes sense (or makes no sense, if you’re post-modernist). That’s why you’ll find DJ media players (and even turntables) in DJ booths all over the world instead of grid pad controllers – DJ media players keep things simple and get the job done.

And that is the crux of the matter – having tools that help us go about DJing effectively is a priority for any DJ. Adding more control in the DJ booth may appeal to a niche audience (eg the Richie Hawtins and Carl Coxes of the world), but for the vast majority of DJs, simplicity wins over complexity, at least for now. Native Instruments made a bold move towards complexity when it released Stems and its Traktor Kontrol S8, S5 and D2 controllers – these were supposed to be the “jogwheel killers” and would be the ones to revolutionise digital DJing. More than three years later, they’ve failed to catch on with the larger DJ population. 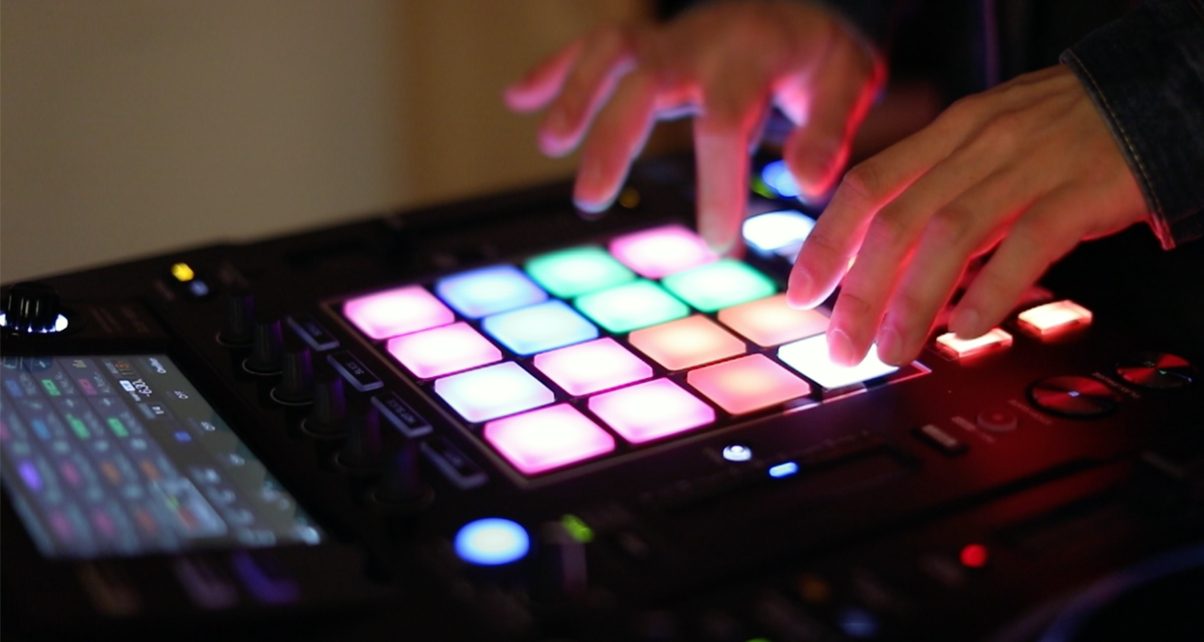 How could’ve Pioneer DJ made the DJS-1000 more DJ-friendly, past a physical form factor change? Simplifying overall workflow and making accessing sounds faster are big ones – ease and speed are key qualities when you’re DJing in front of sweaty clubbers who are hanging on to your every tune, as opposed to taking your sweet time figuring things out when you’re sat in your DJ/producer studio.

Going through several menus to load and edit sounds takes more time than it should, and is something that can be done in a few seconds using a laptop and Ableton. Sequencing sounds using the step sequencer is fun, but seeing how it’s arranged in a pattern on the touchscreen is confusing, and so is arranging patterns into a scene.

There are some controls that do double duty (eg step sequencer buttons also become scene select buttons) which can lead to some head-scratching moments: this is the cost of having a powerful system that does a lot of things, but is limited by onboard physical controls. Sure, the touchscreen bears a big chunk of the operation weight, but even the touchscreen itself can seem cramped and confusing at times.

Will we see clubs all over the world integrate a DJS-1000 in their booths in the near future? That’s unlikely, barring a seismic shift in what DJing entails – maybe what’s more plausible is for some DJ/producers to take along their own DJS-1000 to gigs and plug into the booth’s four-channel mixer if it’s an absolute essential to their performances.

Overall, the Pioneer DJ DJS-1000 achieves what it set out to do, though not as elegant as it could have been – most of the time it just feels like the Toraiz SP-16 reconfigured to look like a CDJ, and that may not enough of a draw for more conventional DJs to give it a go.