Traktor DJ 2 is free, and is a first glimpse at where Traktor is going. Cross-platform, with streaming baked in, and a recommendation engine, it is already doing many of the things “big” Traktor can’t. Currently with a pretty limited feature set it is nonetheless smooth, fun to use and simple – oh and did we mention it was free? Definitely worth giving it a go if you’re a Windows, Mac or iPad user (Android coming, we’ve been told).

Although Traktor DJ started as an iOS-only app that felt like it was intentionally limited, Traktor DJ 2 is a fully featured piece of DJ software that while accessible to beginners, has many of the features that seasoned DJs look for in a DJ software.

Both the desktop and iOS versions of Traktor DJ 2 feel similar for the most part. with the desktop version utilising the extra screen real estate of a computer display. On both versions you get the Waveform layout with two large stacked waveforms that take up the majority of the screen, while still having access to some essential controls.

Both desktop and iOS versions also have what Native Instruments is calling the Jogwheel layout that combines the stacked waveforms with the classic Traktor Pro layout. In this layout you have access to features such as hot cue controls, play/cue buttons, looping controls, tempo controls (tempo fader and pitch bend), and a visual representation of a platter for each deck. The mixer section includes gain control, volume faders, headphone cue buttons, a three-band EQ, effects controls, and a crossfader.

One layout that is exclusive to the desktop version of Traktor DJ 2 is the Classic layout which is similar to the Essential layout found in Traktor Pro. This layout removes the stacked waveforms in favour of the classic Traktor Pro side-by-side deck sections.

In both the Jogwheel and Classic layout the desktop version of Traktor DJ 2 makes use of the extra screen real estate to display the library section along with the deck section. On the iOS version you will need to hit the library button in the top right to access the library as an iPad just doesn’t quite have enough room on the display.

For me the most exciting new feature of Traktor DJ 2 is the addition of the streaming service, SoundCloud Go+. Much like many other major DJ apps, Native Instruments has began to add streaming services and we’re betting that SoundCloud Go+ is just the beginning. We’ll see how it’s been implemented in a short while… 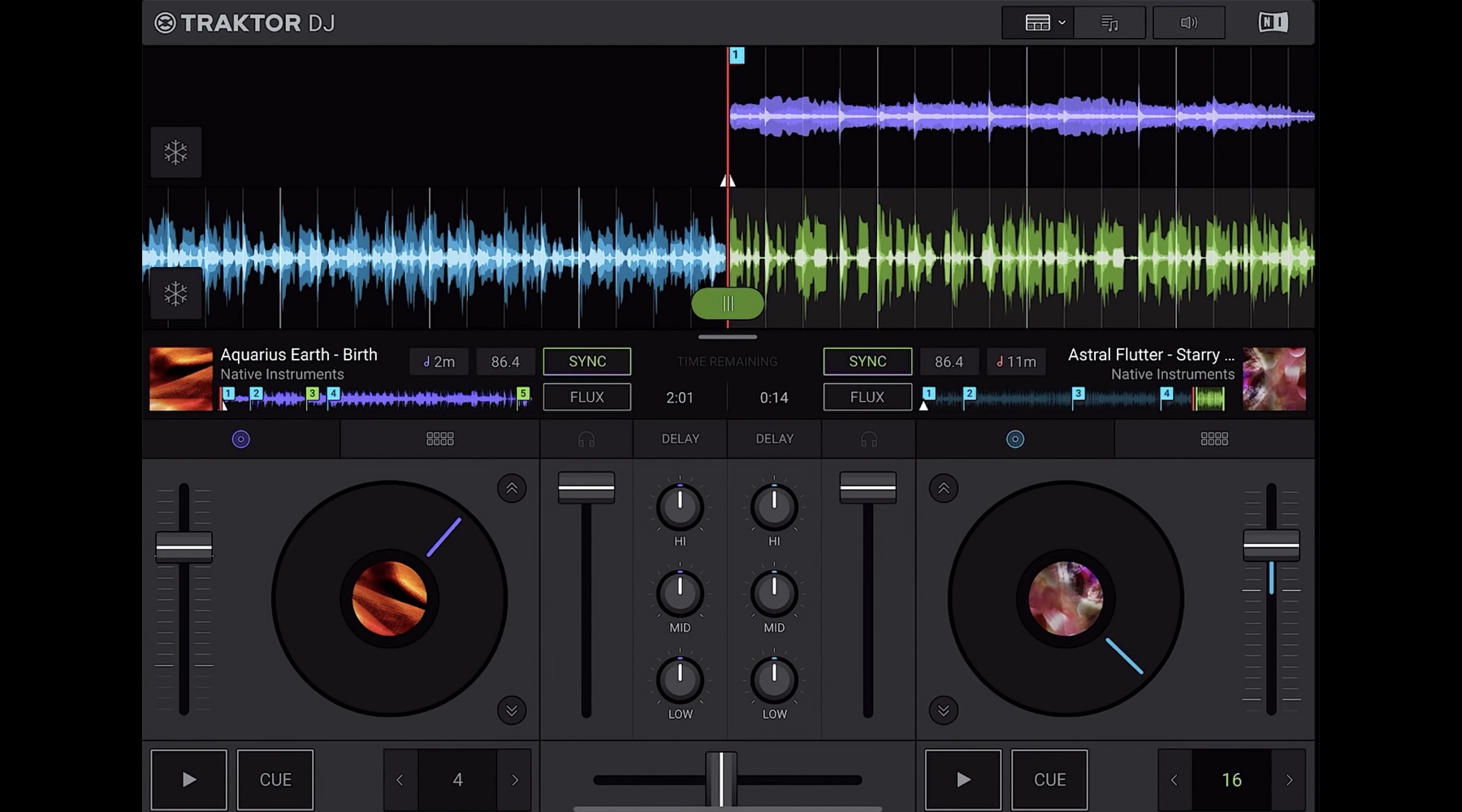 On playing with the app, you soon realise that it has a feature set that even seasoned DJs can appreciate, while still remaining to be easy to use for beginners.

The new layout is easy to understand and to use. It is easy to load your music, get things like beatgrids and cue points set up, and begin playing.

Once the music is playing the new layout shines, as it easy to access all the normal controls a DJ would need. From being able to adjust the tempo to beatmix the songs, to adjusting the EQ or volumes of each track, to adding different effects, everything is laid out in a way that feels natural and easy to use, even on a touchscreen. 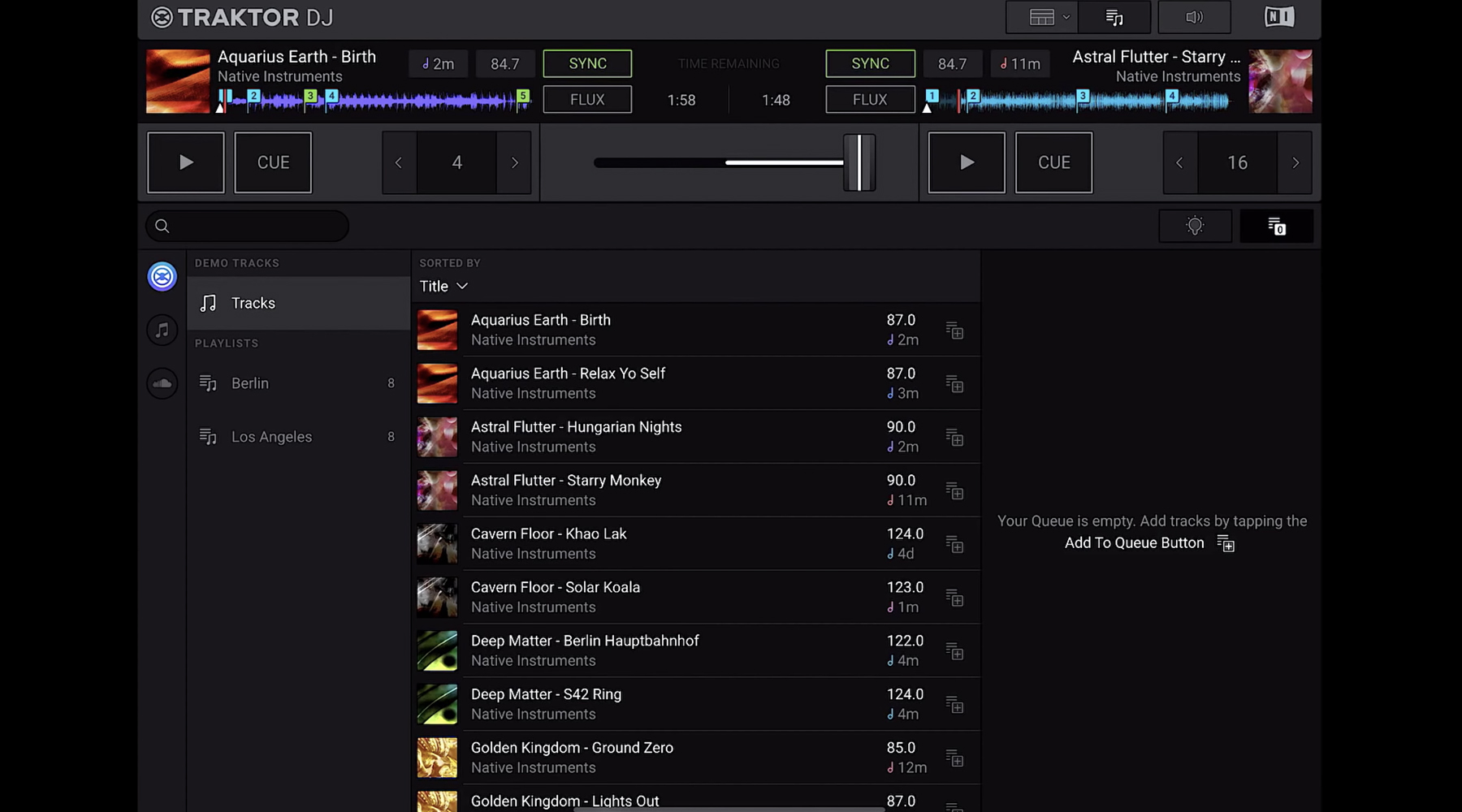 Moving onto the library section of the app, Traktor DJ 2 does a good job of laying out your music clearly and being able to sort it by title, artist, BPM, and key. One nice feature in Traktor DJ 2 that can be found on other professional DJ software such as Rekordbox is the ability to have the software recommend songs based on what is currently playing. This can be a big help to beginner DJs who are just getting the hang of how to programme a DJ set.

The way the effects are accessed and enabled has been reworked in Traktor DJ 2. They function like the mixer effects found in Traktor Pro 3, where you select one of four effects (filter, reverb, delay, gater) and activate it using a single control. The desktop version is identical to Traktor Pro 3 where you select the effect under the knob and then the effect is activated by turning the knob either left or right. On the iPad version this is access but hitting the effects button located above the EQ then using the touchpad. What they’ve done makes sense and in both versions, is intuitive.

As far as streaming goes, the integration has been done seamlessly, where any tracks that are “liked” on SoundCloud appear, along with any saved playlists. Especially in iOS apps, where storage space is limited, being able to access the amount of music available on streaming services in this way is a great thing to have, although there is no “offline” caching, so you do need to be connected to the internet for this to work.

We briefly tested it with the Traktor Kontrol S2 Mk3 and iOS, and the integration of the (obviously somewhat limited) feature set is tight – the jogwheel control is excellent, and somehow, controlling (any version of…) Traktor on a smooth iOS feels great!


Traktor DJ 2 is a worthy successor to Native Instruments’ first iOS DJ app. The company has given us a look into what is in store for Traktor users in the future, as the cross-platform nature of this clearly indicates a roadmap whereby Traktor DJ 2 will one day to catch up with and presumably eventually replace Traktor Pro 3.

The iOS app feels more like a complete piece of DJ software, that I would feel comfortable playing a gig all night with. The previous version felt stripped down to me and made me miss features of some of the features found in Traktor Pro, particularly a classically laid out mixer section, and felt too clunky to use to use regularly for gigs.

The desktop version of the software feels familiar to me as a Traktor Pro user. It could be hard to tell the difference between Traktor DJ 2 and Traktor Pro 3 at just a quick glance. With the deck section, waveforms, and library section all being accessible from the same window, this version of Traktor DJ 2 is easier to use than on iOs – and obviously overall it;’s still severely limited agains Traktor Pro 3 (did like the recommendation engine, though…).

Traktor DJ 2 isn’t without its flaws. Most notably is the way Flux mode does not behave the way it does in Traktor Pro 3. Flux mode only seems to work as expected when scrubbing through a track, but does not when trying to use cue points to juggle around the song or hitting play/pause.

Also I wish that Traktor DJ 2 had more than four effects, especially when the previous version of Traktor DJ included many more. These are both things that can easily be fixed in future updates so I am hopeful they get addressed.

Overall Traktor DJ 2 is a good for what it is, especially considering that it’s free! It is a good way for anyone who is interested in DJing to get started. It has everything a beginner DJ would need in a digital DJ software. It also makes a good second solution for seasoned DJs.

But for now, instead of just playing songs from a playlist, a new or wannabe DJ can properly mix tracks using a software with professional grade features. With what’s included and at its price point (ie free), there is no reason that DJs at any level shouldn’t give Traktor DJ 2 a try.