The Traktor Kontrol S2 Mk3 is a two-channel device for Traktor Pro 3. It doesn’t have the Haptic Drive jogwheels, onboard screens and extensive FX knobs of the Traktor Kontrol S4 Mk3, but it still packs a raft of new features. As an entry to Traktor, the S2 is great. I suspect anyone who buys one will hold on to it for life, because as a second or backup Traktor controller, it would work just fine, however serious or professional the DJ. That’s quite something to say about a unit that costs just shy of $300, software included.

The Traktor Kontrol S2 Mk3 is an important controller for Native Instruments – possibly the most important controller the company has ever made. The reason is that it is an unashamedly entry-level device, costing just $299 (similar price in euros and pounds) for both the controller AND a full version of Traktor Pro 3. Really, this makes it Traktor’s first true big offering ever for the beginner DJ.

This matters because a lot has changed since the Traktor Kontrol S2 Mk2 came out years ago. Small, cheap, capable DJ controllers have sold by the bucketload since (the Numark Mixtrack series, the Pioneer DDJ-SB and RB series, and now the Pioneer DDJ-400, plus even more basic but hugely popular controllers such as the Numark Party Mix).

That means that if the revitalised Traktor platform is to have a hope of keeping and growing its market share, it needs to appeal to the same people whose first taste of DJing is exactly this type of device. That’s what the S2 is clearly designed to do. Let’s see how it shapes up… 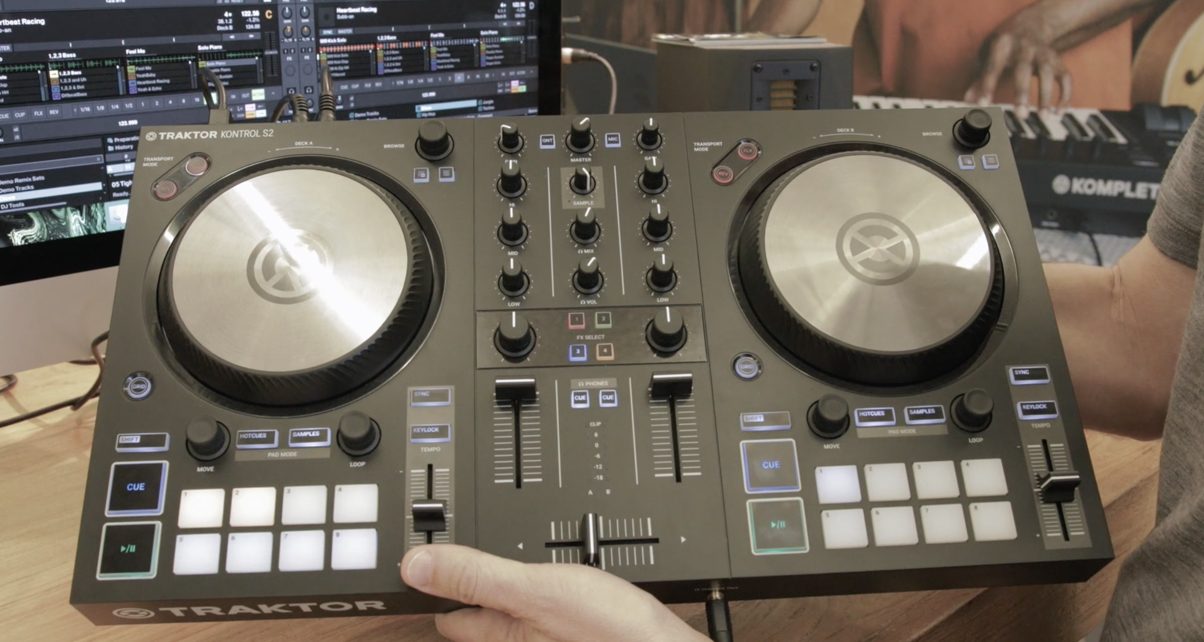 For a $299 controller, it actually feels surprisingly well built. Sure it’s a lightweight, plastic box – but it has just enough heft to feel serious. It doesn’t creak when you do the old “diagonal bend” on it (no? only me?), and the jogwheels have just the right amount of weight, and also are a bit bigger than you might expect. Overall, it is basic, but in a pleasing way – think minimal rather than cheap.

The capable but undeniably complicated Traktor Pro 3 software is still not the easiest to install (or use), but things have improved over the years, and suffice to say as long as you are careful and do everything in the right order, you’ll be fine. We look more at the software elsewhere, but for now let’s look again at the unit itself.

All the buttons and knobs are plastic apart from the two sets of eight coloured rubber performance pads, which have a pleasing “click” on use. The cue and play/pause buttons are big, square, and in the now standard vertical arrangement, and the decks are laid out in the increasingly popular non-symmetrical way. Each deck has a slip (or in Traktor speak, “Flux”) button, and a reverse button that can work with Flux to give you a censor function.

The pitch faders are tucked to the right of the performance pads to make way for those oversized jogwheels, meaning they are quite short.

The mixer controls the two available channels decks with the usual combination of crossfader (adequate and quite loose), stiff upfaders, gain/hi/mid/low controls, and one-knob FX, which have five settings (more on these later). There are separate knobs for headphones volume, headphones mix, sampler volume and master volume – no booth output here.

There is a small six-bar cue VU per channel, and there are buttons to toggle keylock and sync. The performance pads come with a choice of hot cue and sample functions, which is pretty basic, but looping fares better, with both loop size and loop move encoders per channel – something Traktor has always done well.

Round the back are RCA outs, a power in (for charging an iPad attached to the iPad socket that’s there – more on this later), a mic in with a volume control (the on/off switch for this is on the top panel), and two mysterious mounting points – for an iPad stand, maybe? There is a single solitary 1/8″ headphones socket on the front.

First impressions are of a controller that is sure of who it’s aimed at, and that’s not trying to be anything it’s not – it’s a satisfyingly stripped-back piece of kit.

The Traktor Kontrol S2 Mk3 is a fun controller to use. It’s partly because the jogwheels just feel “right” (there’s no wobble, they’re a decent size), and partly because it isn’t too cluttered.

Sure the performance pads aren’t huge, but they don’t need to be as they only control a couple of functions. Sure, the pitch faders are short – but they’re also high quality, adjusting easily up to 1/100th of a BPM even when they’re set to +/-20%.

Sure, the VU meters are small and only (appear to) monitor the inputs, not the master output – but as long as you don’t redline your individual decks, you’re unlikely to redline the master anyway. I’d rather have channel gain meters than master VUs any day.

And sure, there are no full effects engine controls above each jogwheel as you find on some other DJ gear (including the S4), but that means the unit is far less cluttered – and anyway the new mixer effects which are controlled by the big knob under the EQs sound great and will be more than enough for most people.

More about those effects. With no FX Select button pressed, the effects are set to filter. Press any of the four FX Select buttons, and you switch the filter out for other macro/mixer effects – there are actually eight to choose from in the software, and one of them is a long-requested noise effect, which is good to see.

The Flux button does what you’d expect of a slip function, but the “Rev” (reverse) button next to it is actually a censor function (think reverse plus Flux). That makes sense, although if you did want a “true” reverse, you just press Flux while you’re holding down Reverse.

While this is a two-deck controller, it actually can be thought of as “two decks plus eight sample slots”. It works like this: You set decks three and four to “Remix Decks” in the software. You load a Remix Set (a set of samples) into each of decks three and four – you can display the decks on the screen to help you do this. You make sure the four samples you want to use on each deck are in the top “slots” of the Remix Sets.

You can then stop, start, mute and play those samples using the performance pads, by pressing the “Samples” button first, then using the top four pads on each side the play the samples, and the bottom four to mute/enable them.

It’s simple and easy, and for DJ drops and idents, that’s all you’d need to do – but you can sync loops to the main decks too for more creative uses. A single volume control effectively replaces the upfaders for decks 3 and 4, and is situated in the centre of the mixer.

Looping is controlled by two encoders per side, and again, it’s simple but powerful. The Loop encoder turns a loop on or off, and turning it halves or doubles its length. Meanwhile, the Move encoder moves the current loop as it’s playing – a feature many DJs, especially techno DJs, love about Traktor.

Quantise and Snap have survived, although on a single button (you press the button with Shift to engage Snap), and we also liked that if you press Shift then Sync, it locks the tempo faders entirely, to stop you accidentally nudging them should you be mixing exclusively using sync.

Grid lets you shift the beatgrid forwards and backwards, and pressing it automatically engages a metronome set to master tempo in your headphones so you can hear how far ahead or behind that tempo the track whose grid you’re editing is. Beatgridding in Traktor as whole, though, needs work – it has not moved on for years and misses the ability to properly grid tracks with naturally varying BPMs.

Finally, a word about the library functions. The controller goes for a browse section per deck, which is maybe one set of controls too many, but it does make browsing and selecting tracks easy. Firstly, you press a button to go to the library view – important as Traktor is “busy” and there’s not much room for your library on most screens in the “performance” views.

The encoder selects your track, and pressing it loads the track. A second button lets you add tracks to your preparation folder right from the unit, which is great. Meanwhile, if you hold down Shift and turn the encoder, the software cycles either through the tree items on the left, or through the favourites folders above the main library – you can choose which in the preferences.

To an extent the thoughtful and restrained design of the S2 “tames” the still very complex Traktor software, and coupled with a decent build quality and those great jogs, makes the S2 fun to play on, and it feels like it’s a more expensive controller than it is.

This is in its own way quite a bold controller. For NI, it’s bold because it’s unashamedly entry level, period. For the user, it’s bold because of the decisions the designers have made about what to leave in and take out, and how they’ve implemented many of the functions they have left in – which is very well, by the way.

As an entry to Traktor the S2 is great. I suspect anyone who buys one will hold on to it for life, because as a second or backup Traktor controller, it would work just fine, however serious or professional the DJ. That’s quite something to say about a unit that costs just shy of $300, software included.

Native Instruments is also clearly planning on this controller being current for a long time. The iOS socket and mounting points for an iPad stand indicate the company feels the S2 is going to find favour with DJs using iOS rather than a laptop. But as we couldn’t get it to work with Traktor DJ (the current iOS Traktor app – but correct us if we’re wrong please NI), that would indicate an update to Traktor DJ is coming.

As really for us the weak point of this device, if it has one, is the Traktor software itself (despite improvements it is too complex and is still missing a few expected modern features like smart playlists and best-in-class beatgridding), we await developments in this area keenly.

Meanwhile, for beginners wanting to give the Traktor world a go, the Kontrol S2 is a great controller, that ought to do well.