The Book > Rock The Dancefloor

How To Programme A DJ Set

DJ sets come in all shapes and sizes. They are as varied as the venues, crowds, equipment, music, and events where people dance to pre-recorded music. They can be planned or impromptu, performed or pre-programmed. They can be for a handful of people or a festival crowd of tens of thousands. And, as we know, they can be played on everything from a smartphone to a pro DJ set-up.

But the chances are that wherever in the world you’re reading this right now, nearby someone will be stepping up this evening to play music that people will end up dancing to, and – despite the amazing variety of DJ gigs out there – the large majority share a lot more in common than differences. Music gets played. People dance to it. Hopefully someone gets paid for that, and this chapter and the next one are about exactly what to do when that person is you.

As you’ve practised many times to get to this point, the only difference between this type of DJing and that which you’re used to is that, finally, you’re doing it in front of other people. This is scary and exciting… and it’s also the whole point of DJing. Ultimately, it’s not about BPM, or phrasing, or anything else. When it comes down to the final judgement, DJing is really about one thing only: what you play next. 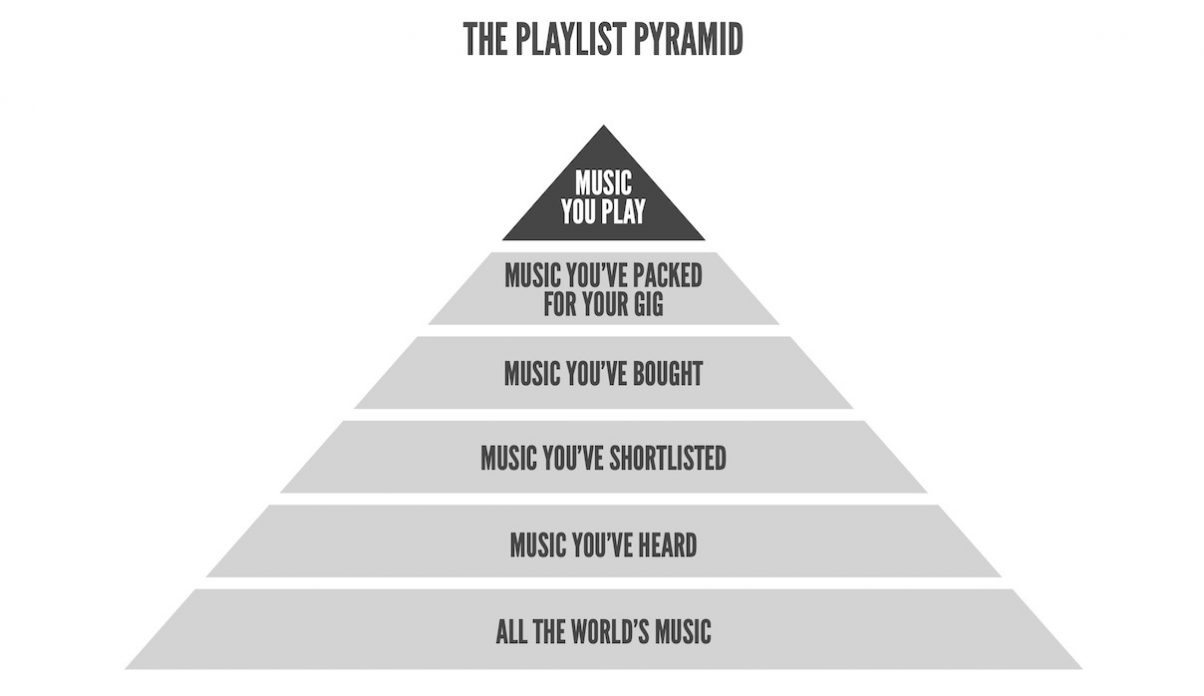 What you actually end up playing in any given DJ set is the pinnacle of the Playlist Pyramid, the only part anyone else sees. But it’s all the work that’s gone on beneath it that makes it all seem so effortless to your audience.

Knowing what to play next is a lifetime’s work, and it’s work that’s never done. even if you’re one of those people who thinks about their DJing all the time – and you most definitely should be if you want to become truly good at it – it’s a question you’ll never find all the answers to. You’ll smile to yourself, remembering times you knew a song would work, and it did. You’ll look for reasons why something worked really well when you didn’t expect it to. You’ll try to decipher why a certain tune that smashed it one week fell flat on its face the next. You will – and I promise you this is true – come up with great mixes in your dreams, mixes that you’ll simply have to try out on waking up. But you’ll also replay over and over as you try to fall asleep the times you thought you had a winner to play next only to clear the dancefloor with it.

So if the above has put the fear into you, it’s time for me to pull you back from the brink and share some tactics that’ll stop you freezing every time you need to make this decision – which, let’s face it, is going to be every three to six minutes throughout your DJing career.

The good news is that you are already set up to make great choices about what to play next (you’ve practised lots, and you’ve actually packed a set for your gig beforehand), and so from this point, you can do a decent job simply by remembering the seven guidelines that follow. At the end of this chapter I’ll share some pitfalls to avoid which will give you confidence that even though music selection is the most important part of DJing, to be ignored or taken for granted absolutely at your peril, it is something you are perfectly capable of mastering.

Seven ideas for choosing the perfect next track

DJs who make it past their first few gigs have an unwritten code of survival beaten into them by the journey. While the tips above contain plenty of ideas to help you develop your ability to find great tune after great tune effortlessly, what follows is a list of rookie mistakes to avoid. Some of them may seem reasonable, possibly advisable, and even those that you can see are wrong you can probably sympathise with, but they’re wrong, nonetheless. Do the above and avoid doing the below, and you’re 80% of the way there.

‘How do you make a statue of an elephant?’ someone asked a sculptor once.

‘Easy,’ he replied. ‘Get the biggest granite block you can find and chip away everything that doesn’t look like an elephant.’

Choosing the tracks that will make the perfect DJ set for the people in front of you right now is both as simple and as difficult as that. This chapter has given you some of the tools and guidelines. Your audiences will give you the rest.

But while every audience is different, one thing great DJs have is a finely honed knowledge of the nature of the audience at certain types of gig – rules of thumb that can assist in programming choices. So to end this step, in the next chapter we’ll take a detailed look at how to approach programming your sets specifically for three of the most common types of gigs: bars, clubs, and mobile.

Next: How to play bar, club and mobile gigs