In this article we are going to start putting what we have learned into practice by creating a basic mapping for hot cues.

Being able to jump to a specific point in a track can be useful in a number of different ways. In many cases I use cue points simply as visual markers to indicate where I want to mix in or out of a track. This alone is hugely helpful compared to the old method of eyeing the groove on the record to see approximately where the breaks occur!

Further uses for cue points
Having said that, cue points are far more valuable than that. Cue points can be used for beat juggling, live remixing or to edit a track down on the fly, such as skipping past a long intro or past a breakdown that doesn’t work for you. Conversely, you might wish to jump back to a certain point in order to lengthen a track, giving yourself more time to work on the mix. How you utilise cue points is up to you, and Traktor makes it all very easy.

Traktor provides multiple kinds of cue points and it is possible to set literally hundreds of them on a single track. In this article we are focusing on “Hot cues”, as these are the cue points that you will likely use most frequently. The only difference between a cue point and a hot cue is that hot cues exist in one of the eight hot cue slots on a given deck, making them rapidly accessible for all your beat juggling shenanigans.

Managing hot cues with a keyboard and mouse was never an option for me as it felt too awkward; however, working with hot cues on a controller is a breeze.

One of the first things you’ll need to consider is how best to use your the available buttons on your controller. If we were to use one button per hot cue we would need 32 buttons on our controller.

With the MidiFighter (as well as with many other controllers) this is seemingly not an option given it has only 16 buttons, but with the cunning use of modifiers and banks we can get these hot cues set up with buttons to spare. Only, I sold my MidiFighter…

There are many good online resources for the Vestax Pad-One so I will not cover it here in any detail. I will tell you that the Pad-One is a 12 button, four-bank controller, complete with XY pad and capable of withstanding a direct hit from a nuclear missile. If you want to learn more about the how the Pad-One and MidiFighter stack up, check out the comparison table and my thoughts the end of this article.

In this article I am going to emulate the method used by the S4. The S4 provides one row of buttons for hot cues 1 to 4 and the option to use the row above (labelled “Samples” as that’s its default use) for cues five to eight. This set of controls is duplicated in the other side of the controller for Deck B. The S4 provides a button to switch this bank of controls to deck C and the other bank to deck D.

The mapping we are creating for the Pad-One will look like the screenshot below. Eight hot cues will be assigned, four on each row. The “Shift” key will be used to delete hot cues and is mapped to the far right pad on the second row.

Notice the “Bank” indicator above the pads is currently set to A. Banks act much like the memory presets on your car stereo. On my radio I have a “BAND” button that cycles through FM1, FM2 and AM. I also have five buttons that I can use as presets for radio stations. Once I have filled up all the presents on FM1 I can press the BAND button, switch to FM2 and re-use the buttons again. That BAND button changes the “bank” and enables each button to be used three times, two for FM and one for AM.

On the Pad-One the BAND button is replaced with BANK and rather than having the three banks of FM1, FM2 and AM we have four banks labelled A, B. C and D. With all four banks in use we effectively have taken a controller with 12 buttons and turned in into a controller with 48 buttons. In this set-up all the controls on Bank A will be assigned to Deck A with all controls on Bank B being assigned to Deck B and so on. Once the set is complete, you will be able to cycle through the decks by hitting the bank button. We have included a TSI file with this article that contains the hot cue mapping for all four banks. 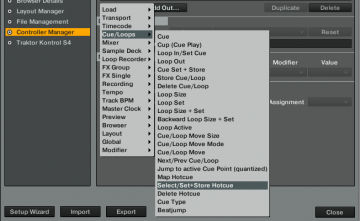 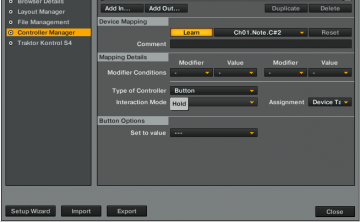 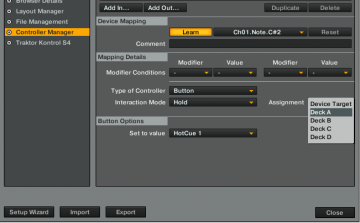 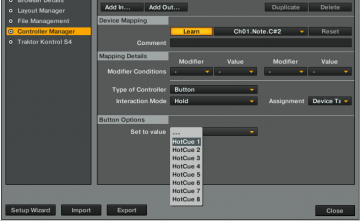 Providing your Learn button has been de-selected you can test the mapped button from within the Controller Manager. In order to create the next seven hot cues all you need to do it select the control you just mapped and hit the Duplicate button.

The duplicate button does exactly what it says it does, a new line item will appear in the Assignment Table with the same settings except for the the device mapping target which appears as n/a. The first thing you need to do is map the button for the duplicate using the Learn function again. Next up you will need to change the Button Option > Set to Value to the Hotcue 2. Repeat this process for all the hotcues.

Now you have all 8 hot cues in place you are ready to go town – if you only want one deck! On the Pad-One you will need to switch to Bank B and repeat the process again. To expedite the process, duplicate each of the eight hot cues from the first bank rather than duplicating the same mappings eight times; that will cut down on the work. Now all you have to do is switch the Assignment from Deck A to Deck B. By now you should be seeing the pattern and be able to replicate the process for Banks/Decks C and D.

When you have completed the work you should end up with 32 line items, eight for each deck. At this point it’s worth double-checking your mapping. I generally go in and sort the Assignment column to ensure that there are eight entries for each deck. I will also sort some of the other columns to ensure I have eight line items for each of the hot cues and so on. You may choose to dispense with all of that and simply test the buttons, but using the column sort function is a good way to troubleshoot mappings that contains lots of replication.

The next section deals with setting up the modifier that we will call the “Shift” button. When used with the appropriate pad, the Shift button will delete the hot cue. 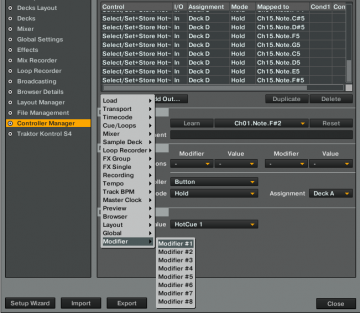 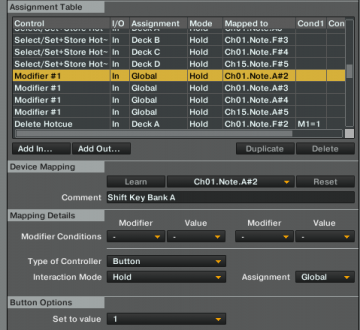 Like any other control, we are going to assign this modifier to a button using the Learn function. This button will be our Shift key. We will set the Type of Controller to Button (because it’s a button) and the Interaction Mode to Hold (So it acts like a regular keyboard Shift key and only functions for the time it is held down). We will set Button Options > Set to Value as 1. This is what gives the Shift button the value M1=1 (Modifier #1 with the value of 1).

We could have used any of the eight modifiers available and any of the eight values (such as M7=4). Which modifier you use is unimportant. Keeping track of what you have assigned and where is very important. You will notice from the screenshot above that we have four instances of this modifier set up, one for each of the banks.

Now that the Shift button is set up as M1=1, any other control (e.g. Delete Hotcue) that is set up with the Modifier Condition of m1=1 will work as long as the Shift Key is used. For us that means that pressing Shift with the pad#1 will delete hot cue #1. 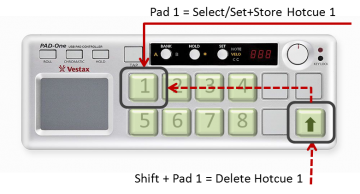 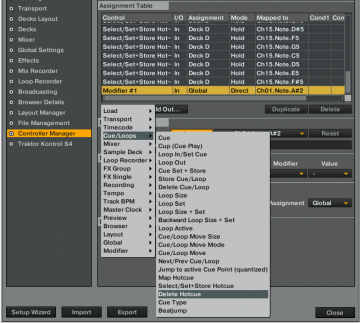 We need to set up one Delete Hotcue action for each of the pads that trigger a hotcue. This process is much the same as the Select/Set+Store setup. You will need to set up one action for each pad and replicate the process across all 4 banks. Be sure that the Modifier Conditions Value on each Delete Hotcue action us set M1=1 (Modifier #1 with a value of 1). 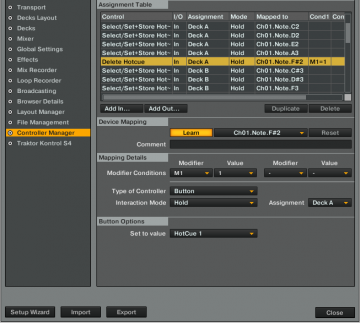 When completed, you should end up with 70 lines in your Assignment table: 32 lines for the Select/Set+Store Hotcue, 32 lines for Delete Hotcue and 4 lines for each of the 4 modifiers. All there is to do now is test and play!

For those of you who want to cheat, we have provided you with a TSI for this mapping. It can be downloaded here. To import the file, unzip it then use the Import button as shown at the bottom of the previous screenshot and then browse to the location of the downloaded file. With some alterations, The TSI should work with any controller with nine or more buttons.

At very least you will need to re-learn all the buttons. I do however highly encourage you to spend the time putting the mapping together yourself. You may end up using just part of the mapping or none of it at all, but doing this yourself will help you to learn more about Traktor and your controller.

In the next instalment I will have a go at creating some audience-numbing effects using the Pad-One’s XY pad. I may also break out the new MidiFighter Pro controller and see what FX weapons we can created the additional knobs and faders. If there is something in particular that you would like to see me cover in a future article please visit my Facebook Page and leave a message. Remember, I am not an expert and am simply writing as I am learning this stuff!

Footnote: The Pad-One and The MidiFighter Classic
In terms of how they differ, I have outlined what I see as the major points for comparison below. In the interest of full disclosure, I am also a contributing writer for DJTechTools. 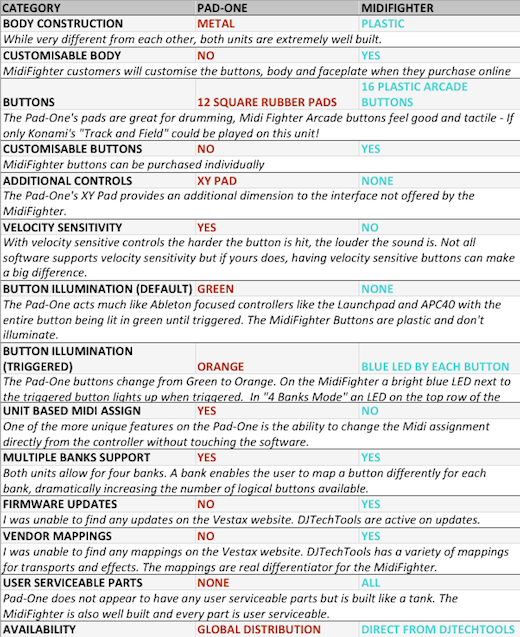 As I said, I own both. I purchased the MidiFighter to give me extra mapping bandwidth with the S4. I purchased the Pad-One for more Ableton focused tasks like drumming etc. The Pad-One’s XY pads allow you to create some insane effects (which may or may not be a good thing for your audience) but I am excited to check out how the knobs and faders are implemented on the MidiFighter Pro.

One thing I will say is that the Pad-One should not be confused with the Korg NanoPad. They may look similar and perform similar functions but that’s where the similarities stop. The Nanopad feels like a child’s toy and DJs like James Zabiela have recently ditched these units due to unreliability, moving over instead to the Pad-One.

Have you had success mapping your hot cues to external devices? Have you been following these tutorials and found this information helpful? Let us know your thoughts in the comments.