We’ve reviewed a lot of pretty complex DJ controllers recently, with banks of controls accessed by multiple shift and modifier buttons, and colour-coded deck layers, and scary blocks of buttons, and clever ways to handle multiple inputs and outputs. But strip away their complexities, and many of these controllers are actually pretty similar to each other.

So when we got our hand on a pre-production DJ-Tech 4Mix, we were both pleased and intrigued. Not only is this controller smaller and simpler than anything we’ve covered recently, but there’s some fresh thinking going on here too.

The DJ-Tech 4Mix is compact – it’s about the same size as the Novation Twitch, although it stands a bit taller than that controller. It is a black plastic-cased controller with rounded corners and rubber feet, but it has a screwed-down silver and black metal faceplate.

It appears cheap but sturdy; DJ-Tech uses nasty silver plastic knobs for its EQs, and these let the look down somewhat unnecessarily, because when you look harder, it’s actually well made – the controls are mounted sturdily, and due to the way it’s designed, it is easy to remove the faceplate to replace the VCA crossfader, for instance.

It’s a four-deck controller that ships with Virtual DJ LE, and it puts a lot of controllerism’s better-loved features – big hot cue pads, samples, simultaneous control of four channels including filters – right at the DJ’s fingertips. The controls are simple, chunky, bold and spread out. There are four channels down the middle of the unit, with EQs, big fat filter knobs, line faders and cue buttons – a total of six controls per line. Each line also has a “peak” red LED.

Top left are four knobs and four buttons for samples/FX; to the right are master and booth volumes, library navigation and deck load controls; and mid-left and mid-right are two simple Allen & Heath-style jogs, each with vinyl mode and a deck chooser switches.

Finally, and boldly, at the front of each deck are twelve big lit rubber performance pads, for transport, cues and looping.

And that’s it. Apart from the few features on the front (mic level / tone and headphones cue mix / level) and on the back (master / booth outputs, USB, power and crossfader curve), I’ve just described the controller in its entirety for you. Told you it was simple!

Setting up is easy – you install the supplied Virtual DJ LE (plus the ASIO drivers if you’re a PC user), plug in and open the software. A quick trip to preferences to configure the sound output and you’re ready to rock.

Loading a tune involves scrolling through your list with the selector knob. While pushing-to-click moves the window focus from the tree to the files, there doesn’t seem to be any way of opening in and closing folders in the tree apart from using the keyboard. To load a tune you just press the corresponding deck A/B/C/D button.

There’s no channel gain so you have to rely on Virtual DJ’s auto gain, which is luckily auto-enabled in Virtual DJ LE. The (rather sensitive) jogwheel lets you find your cue point, and hitting “CUE” drops a cue marker. The jogs aren’t dual-use, by the way – instead, there’s a vinyl / nudge button to switch between the two uses.

There are four big cue buttons per deck, and they work as you’d expect – pressing one drops a cue marker, shift + cue erases it. Once it’s dropped, pressing that button again takes you to the cue.

For looping, there are manual in / out pads, but also beatmatched loops; you press shift plus “in” to halve the loop length, and shift plus “out” to double it.

The sample decks are simple – you hit the button to start the sample playing, and adjust its volume with the volume knob. The included (in)famous sirens etc from Virtual DJ are mapped out of the box, but luckily you can easily record your own from the LE software, and they can be beatmatched and looped automatically.

Pressing shift and the sample buttons is meant to give you effects, but the only effect I could find there was brake (ie turntable slowdown); with pro software you could map effects here easily enough. The EQs kill 100% which is good; the filters sound OK, but to my ears they’re not outstanding.

One obvious thing that’s missing is any type of manual tempo control; apparently in the production mapping it’ll be included with shift plus a knob; it is necessary, I think. Relying on sync is a recipe for disaster, especially as you can’t beatgrid with Virtual DJ to be sure your BPMs are correctly analysed.

My biggest issue with the software/hardware correlation is the bizarre mapping of the four channels. Instead of going A-B-C-D across the screen and hardware, they go C-A-B-D. Throw into the mix the fact that Virtual DJ refers to its decks as 1, 2, 3 and 4, not with letters, and you’ve got a recipe for major confusion.

This is a real shame because it defeats the whole object of such a simple, what-you-see-is-what-you-get controller; it makes it hard to know which channel is controlling which deck on the screen.

This is a good concept, and a promising controller. At the moment it’s let down by Virtual DJ LE as supplied not being particularly suitable software for it, due to the bizarre mapping.

To be fair I’ve seen this before (in the Denon DN-MC6000 mapping) so I sympathise that it might be that it is a Virtual DJ thing, but it matters not a jot to the confused user. What’s more, you can’t manually remap the LE software, so you’re stuck with things as they are.

Let’s not get too negative, though: It’s a solid concept. This is an pre-release unit, so maybe it will be sorted out by launch, with firmware and/or mapping updates. More to the point, you’re not tied to using it with Virtual DJ – you could make a really nice performance mapping for Traktor for this, giving you an immediate, fun control surface across four decks.

Mapping superior filters to those big filter knobs would add to the goodness, and finding a way to sort out easy looping would also be top of your list.

So: You’re turned off by the complexity of many of today’s controllers and just want pads, knobs and faders to give you basic control of four decks? You’d like hot cues and filters right at the fore, and a splattering of extras controls to map at will? And finally, you’d like it all in small, light and (relatively) cheap unit? In that case,the DJ-Tech 4Mix could be for you. Pricing is reasonable, although for around €70 more, you could get the two-deck Novation Twitch, which has full strength DJ software thrown in too.

Does this look like fun to you? Can you see yourself mapping it to do what you’ve been dreaming of, at a reasonable price? Or do you think there simply aren’t enough controls for what the average DJ needs? Let us know your thoughts in the comments. 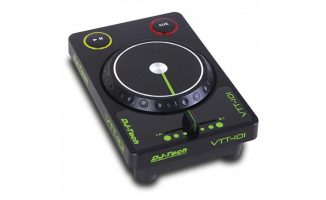 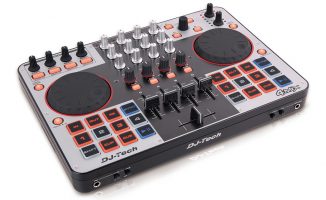 DJ-Tech 4Mix: 4-Deck Controllerism For Everyone