Now we’re back in our office, we’ve got a chance to bring you all those little things from around the NAMM Show 2013 – things that we didn’t get a chance to cover in more detail earlier, but that we felt were worth a mention.

So from pimped rides to big screens, black boxes to branding exercises, here’s a quick round-up of some of the important bits and pieces we’ve yet to cover from this year’s show… 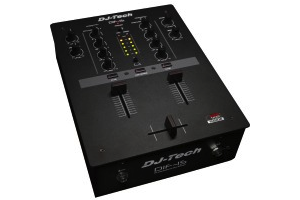 At a jaw-dropping US$149, this dead simple two-channel scratch mixer has an Innofader for quick cuts, aluminium faceplate, an extra in/out set of RCAs on the back (so you can leave your DVS breakout box plugged in at all times, no matter what other sources are also plugged in to the mixer)… and that’s it. Truly “back to basics”… and it’s a total bargain. 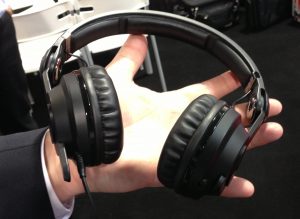 Looking like a cross between the AIAIAI TMA-1s and the Sennheiser HD-25 IIs, these long-awaited headphones from Zomo looked and felt great. We’re waiting for the company to provide a loan sample so we can bring you a full review and video, but for now let’s just say that assuming they end up performing well, they will be pretty desirable. 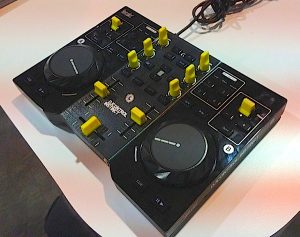 Here’s the little Hercules DJControl Instinct DJ controller, pimped up with dayglo knobs, fader caps and buttons. This is going on sale as a special edition apparently, for those of you who simply can’t live without “expressing yourselves” by replacing one colour of knob with another on your DJ controller. 😉 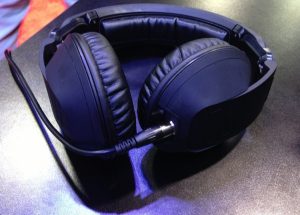 We’re big fans of the Reloop RHP-20 headphones, and we have to say we were impressed with the all-black edition, on show at NAMM for the first time. The metal silver sides are now rubberised in black, so there’s a texture change too. They have the form factor of a full-sized phone, with the understated cool of something like AIAIAI’s TMA-1s. 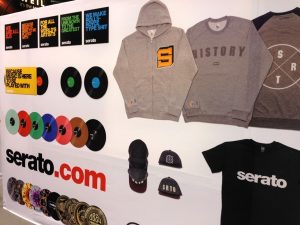 Serato Brands Up The NAMM Show

Serato is clearly making a big push towards improved recognition outside of its core base of fans. Every stand that had Serato-licensed products seemed to have a Serato plaque displayed prominently, and the cxompany’s own stand (this photo is the back of it) was full of lifestyle-focused products, slogans and clothing ideas.

In case you missed it… DJ Young 1

No need to re-introduce this one, just watch and see if you’re not smiling by the end of it.

Traktor pimps its ride and skulks round the edges 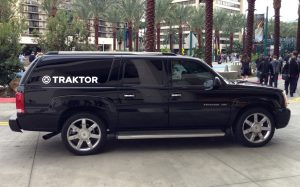 There was no Native Instruments stand at the show, but the company was there and could be spotted… if you kept your eye on the street. There was also no new product from Native Instruments outed, but just before the show there was a teaser on the Traktor Facebook Page about a new iPad something-or-other, so watch this space… 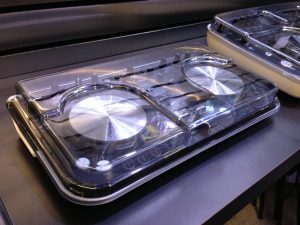 As ever, new controllers equalled new models, and we saw the Pioneer DDJ-SX, Pioneer DDJ-WeGo and several other new covers for DJ controllers from this popular brand. We also saw custom Magma controller soft cases that can snugly fit controllers with Decksaver covers in place, for the ultimate protection. 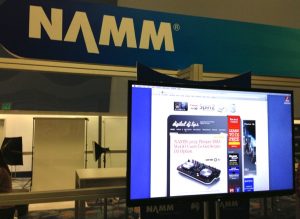 It was hard to miss this very website as you entered the show, as we were slap bang on a huge TV screen right near the DJ halls, with much of our news and reporting on display daily for visitors to see. We managed to bring you video news from within half an hour of the show opening, and in a timely manner all the way through, thanks in no small part to the excellent facilities provided – so thanks, guys and girls of NAMM-ville. 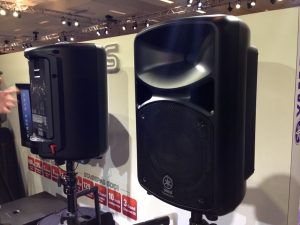 We’re always banging on about not using your home speakers for DJing parties etc, and these two mini-PAs give you a more sensible solution. The speakers fold together, the separate mini-mixer locks into the back of one of the speakers, and each system comes with a zip-up nylon bag for easy transportation. They feature reverb, feedback supression, and EQ, and are rated 400W and 680W respectively. Stands are an optional extra. 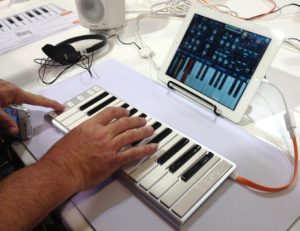 We loved the form factor of this little keyboard, which would be perfect to have tucked on your studio desk for easy composing in your favourite DAW. Clearly meant to ape the look of Apple’s wireless keyboard, this one of course has a USB socket, and apart from its looks, its selling-point is that it has full-sized keys with polyphonic aftertouch. 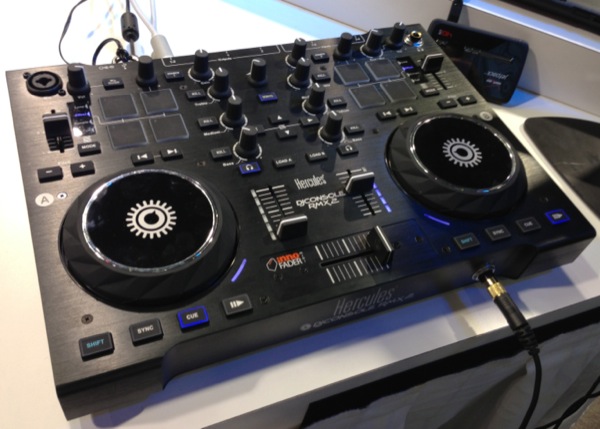 Hercules blings up its 4-Mx controller

It’s not only Pioneer that can release blingy, limited edition versions of its controllers. Hercules had the RMX2 and the 4-Mx on display, both in black versions. The 4-Mx as pictured has decal details in gold, for that “money no object” look. Apart from that, it’s technically exactly the same as the normal-coloured version. 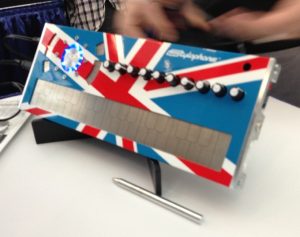 Stylophone gets relaunched with some Brit chic

Anyone of a certain age will remember the original Stylophone. It’s a British electrical instrument whose keyboard you play using a wired pen that completes a circuit. This new version preserves the original idea and sound, but adds a heap of modern extras, and comes in a number of finishes, our favourite being this Union Flag-inspired example. 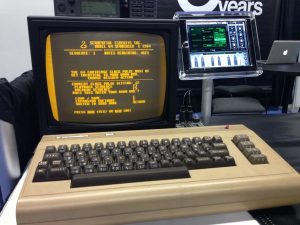 Without Midi, they’d be no digital DJ controllers, indeed no electronic music as we know it. Thirty years ago, Midi arrived on the scene, and this year there was a stand at NAMM celebrating this. This picture shows an 80s PC, the Commodore 64, hooked up to an iPad. I’ve no idea what it was doing, how or why, but I though it worth a picture.

And that concludes our coverage from NAMM Show 2013. We’ll be back on the road again for the next big show, Musikmesse, in April.

Meanwhile we’ve got the small matter of Scratching For Controller DJs to launch, one other bit of extremely exciting news to bring you – oh, and a website to run. So see you tomorrow as we return to normal, jetlag notwithstanding… Over and out!

What was your highlight of the NAMM Show this year? Anything above stand out for you? I’d love you to share your thoughts in the comments.