Forgot to take your microphone to the gig? An old DJ trick can turn your headphones into a mic! All you need to do is connect your headphones to your mixer’s mic input. It’s that simple.

This works because microphones and speakers are similar in a lot of ways. Microphones convert sound into electrical signals while speakers do the opposite, converting these electrical signals into sound. Despite this inverse relationship with each other, they’re practically comprised of the same components and operate under the same sonic principles.

When you speak into a microphone, the diaphragm vibrates, sending electrical signals down wires inside the microphone and into your mixer preamps. These electrical signals travel through wires that go to your amplifier and speakers, which have an electrical coil and magnet attached to the speaker cones. As the cones vibrate, those signals get converted back into sound.

The sound quality isn’t as good as a regular microphone because headphones aren’t built for this purpose, but in a tight squeeze this trick can be a lifesaver!

On the topic of microphones, how about making a DIY lavalier mic using an old pair of iPhone earbuds for recording?

You’re going to need a headset splitter adapter that divides the input into two signals: One for the microphone, and one for the earbuds. This is essential if you’re to be using this on a standard mic input like the one found on your mixer or audio interface. On your iPhone, the headphone input does the splitting for you already, which is why you don’t see a separate plug where you need to jack in your mic. This is also the case with Macbooks and iMacs. You can actually stop there already, but for a more permanent modification that strips the mic to its essentials, you can lop the earbuds off if you so choose. Read on…

Get your pair of earbuds and locate the wire where the controls and mic are.

Once found, cut the wire after it leading to the earbud. This will be your mic.

Cut the other earbud off at the point where the two wires join together.

Connect the jack to the mic input of the adapter mentioned earlier in this article, and connect the adapter’s jack into your mixer or audio interface. You’ve now got a tiny microphone that could function as a lavalier mic. You can use this at a gig or even shoot videos with it and, thanks to its small size, it’s easy to hide. Again, if you’re on a Mac or similarly equipped input (4 position Tip Ring Ring Sleeve jack), you don’t need the adapter.

Ever been to a show where you’ve forgotten your mic at home? What other gig horror stories can you share about equipment you left behind (phones, USB cables, power supplies)? We’d like to know! Share them with us in the comments below, and tell us how you got around to sorting them out.

2 Ways To Get Great Sounding Audio On Your DJ Livestreams 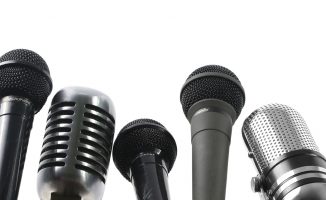 Your Questions: How And When Should I Use A Microphone? 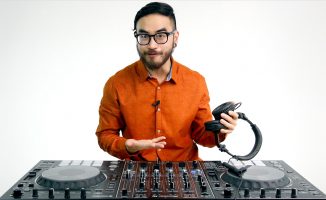 DJ Tips & Tricks: Use Your Headphones As A Mic (Oldskool Hack!)

A DJ's Guide To Microphones