Portable Bluetooth speakers occupy a curious niche: On the one hand, they aren’t exactly “must haves” for DJs the way earphones and headphones are, but on the other there’s no denying that they’re an awesome convenience to have for small outdoor parties, picnics, and going to the beach. That is, of course, if you don’t mind the latency between your device and the Bluetooth speaker.

The Samson Expedition XP106w is a 100-watt Bluetooth speaker that runs on a 20 hour-life rechargeable battery, with an important distinction: It’s got an onboard four-channel mixer. Streaming music from your mobile device and want to go wireless? Use the Bluetooth channel. Want to use them as PA speakers while you DJ your next house party? Use the wired line inputs. It even comes with a wireless microphone and USB dongle that you can connect to the XP106w’s rear if you want to get on the mic!

The connectivity options are over and above the usual, but how does it sound? We find out…

The Samson XP106w itself is small since it’s only got a 6″ woofer, but it’s heavier than it looks thanks to its internal amplifier and battery. Still, it isn’t too much of a burden to lug around a pair of these.

Note that there aren’t any EQ controls on the XP106w: You’ll have to tweak them on your DJ controller, mixer, or mobile device. It only comes with a switch that lets you choose from “Music” or “Speech”, with the latter just rolling off the low end to eliminate rumble, hum, and mic handling noise.

To hook up your DJ controller or mixer, you need to connect one of the master output jacks to channel two’s Line In, and then set it to work in mono in your DJ software or your hardware mixer. If you’ve got two of these, just connect your master outputs to either speaker’s Line In jacks.

I plugged in the included power supply to fully charge the XP106w’s battery before use, and when it was done I got to work.

My favourite portable Bluetooth speakers are the Bose Soundlink III and the IK Multimedia iLoud, but I’d like something more substantial if I’m plugging my DJ controller at my next barbecue. Being a portable speaker, I took the XP106w to task in my backyard and found it decent: It has a very “hyped” sound, especially where the highs are concerned. This may or may not be to your liking, however in an outdoor setting this really makes the music cut through the ambient noise and chatter.

I was pleasantly surprised by the bass reproduction given its small size, but don’t mistake this for a full-on loudspeaker substitute: It’s enough to be heard, but not enough to be “felt”. With that said, this thing is loud. Don’t let its size fool you!

Next, I wanted to try out how it performed indoors. I set it up in a corner of our living room and connected my iPad via Bluetooth. As expected, there was a slight lag between device and speaker playback, but since I was just listening to music and not mixing it was OK. Indoors, the cutting highs of the XP106w were on full display – you’re not going to miss a single hi-hat sizzle, especially when you turn it up. I’ve mentioned before that I’m not really fond of overly bright headphones and speakers, but for those of you who like that (and I’m sure I’m in the minority in this one!) there’s abundant clarity and presence on here.

Lastly, I hooked the Samson Expedition XP106w up to my bedroom DJ set-up consisting of a pair of CDJs and a DJM mixer. At a moderate monitoring volume in the confines of an intimate space, it sounded like the bass was more pronounced, although I found the treble to be even brighter since the speaker was close to me – I solved this by placing the speaker below ear level, though again I’m sure most DJs won’t find this to be a problem.

I think the XP106w shines in outdoor use for small gatherings, whether hooked up to your DJ controller or paired with your mobile device. The included mic and receiver are handy if you’ll be doing any MCing or announcements, or if you find your party to be buzzed enough for a round of impromptu karaoke (always fun!)

The biggest strength of the Samson Expedition XP106w is its versatility: It’s got more input options than your standard Bluetooth speaker, and its sheer volume could be enough incentive to pick one or two up for your next street gig (DJ busking, anyone?)

This “Swiss knife” characteristic is also the XP106w’s Achilles heel: Packing in a wireless mic, receiver, and Bluetooth all come at a cost, and at under US$300 for one piece, most casual DJs will find that having myriad connectivity options won’t be enough of a reason to justify the price for a pair. If, however, you’re a mobile DJ or someone who gigs a lot in unusual places that don’t have power outlets (eg the beach, an abandoned storeroom, back-alley minimal techno meetups), this could be something that ticks a lot of unique boxes for you.

What do you think of this portable Bluetooth PA system? Do long-life battery-powered speakers make dream up of creative gig situations in unusual places, or are they more for singers / buskers? Let us know your thoughts below. 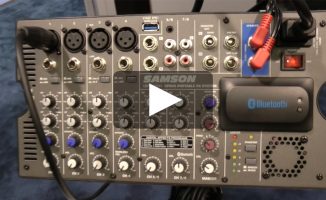 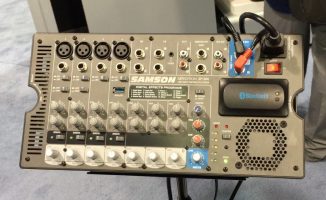 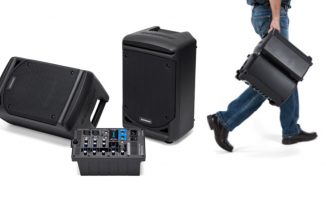