One theme that comes up again and again across all areas of our community – whether it’s DJs, musicians, producers, DJ business owners, or whoever – is: “Is it OK to copy?” To be clear, we’re not talking about copying your mate’s entire music collection (or indeed downloading someone else’s, P2P style), but rather imitating, emulating, trying to perfect your version of what someone else has done.So for example, we may hear this question when a DJ says to us: “Is it OK to perform a great transition or mix I heard another DJ play, in my own sets?” (Often this turns out to be an acapella over another track.) Or we may hear a wannabe producer say: “Is it OK to try and copy tracks I love?”

But it covers other things to. The look and feel of a business card, a website theme, maybe a combination of DJ gear (“I just LOVE what he does with that sampler / drum machine / groove box – is it OK for me to ‘copy’ him?”)

Steve Jobs – a man himself famously once described as a “tweaker”, someone who takes something that exist and makes it better – made some controversial comments about innovation during his career, one time expressing strong agreement with the following quote from Pablo Picasso, no less: “Good artists copy; great artists steal.”

In a lesser-known quote, Picasso also said: “One begins to copy oneself, and to copy oneself is more dangerous than to copy others. It leads to sterility.” In other words, copying others who inspire you and excite you can actually save you from going down a creative cul-de-sac.

So it seems that both for beginners and for established creative people of all types, copying is part of the process.

There’s a great book on this subject by a guy called Austin Kleon, called Steal Like An Artist: 10 Things Nobody Told You About Being Creative. Here are some extracts from it: 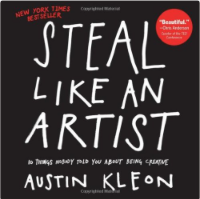 “Nobody is born with a style or a voice. We don’t come out of the womb knowing who we are. In the beginning, we learn by pretending to be our heroes. We learn by copying.

We’re talking about practice here, not plagiarism – plagiarism is trying to pass someone else’s work off as your own. Copying is about reverse engineering. It’s like a mechanic taking apart a car to see how it works.

We learn to write by copying down the alphabet. Musicians learn to play by practising scales. Painters learn to paint by reproducing masterpieces.

What a good artist understands is that nothing comes from nowhere. All creative work builds on what came before. Nothing is completely original.

If we’re free from the burden of trying to be completely original, we can stop trying to make something out of nothing, and we can embrace influence instead of running away from it.”

Here are five reasons why you should be embracing copying in your DJing and music production career, and not back away from it, worried you’ll upset people or that you’re not “doing it right”.

When you first pick up a guitar, do you immediately invent some chords nobody’s played before, then come up with some amazing new genre of music nobody has heard before? Of course you don’t. You learn some simple existing chords, then learn to play whole songs using those chords. In doing so, what you’re actually learning is the essential basics of playing the guitar. Yes, through copying.

Even the Beatles started as a cover band. Paul McCartney has said, “I emulated Buddy Holly, Little Richard, Jerry Lee Lewis, Elvis. We all did.” And Oasis? I don’t think it’s unfair to say they copied The Beatles. Didn’t do them too much harm did it?

Let’s say you’re a producer, trying to copy your favourite track. Do you really think you’ll find the right drums, reverbs, effects, vocal samples, mixing techniques and so on to make your version of your favourite track sound exactly like the original? Especially as a beginner, the answer is going to be an emphatic “no”. But by trying to copy something, you will come up with your own ways of doing things that are the beginning of your own “style”

Austin Kleon again: “The basketball star Kobe Bryant has admitted that all of his moves on the court were stolen from watching tapes of his heroes. But initially, when Bryant stole a lot of those moves, he realised he couldn’t completely pull them off because he didn’t have the same body type as the guys he was thieving from. He had to adapt the moves to make them his own.

“Conan O’Brien has talked about how comedians try to emulate their heroes, fall short, and end up doing their own thing. In O’Brien’s words, ‘It is our failure to become our perceived ideal that ultimately defines us and makes us unique.'”

3. It helps you get stuff done quicker

A lot of the things we feel and want to express creatively aren’t easy to do from scratch. Copying lets you get it done so you can move on to the next thing.

Say you want a nice website for your DJing. It’s much easier to give a graphic designer on fiverr.com three existing DJ logos whose look and feel you like, and say “give me something like that”, than it is to invent your own logo. It then makes much more sense to slot your new (derivative) logo into a website template that you bought somewhere like Theme Forest) than to design your own website from scratch.

Once you’re set up, with your social media feeds plugged in and all, what stuff should you post on your site? Again, makes sense to study what successful people who have great online profiles are doing are doing, and copy them. (Hint: Rule of Thirds: one third promoting yourself, one third interesting stuff other people are doing, one third interactions with your fans/followers. I didn’t invent that, by the way: I copied/adapted it.)

What you get at the end is a combination of elements that represent you. Individually none of them is particularly unique, but you got the job done – and you now (in this case) have a base on which to build the face you show the world online into something uniquely yours.

4. Everyone else is doing it

If you just want to go with the crowd, copy! Especially in the realm of music production, copying has become the norm. As soon as samplers became accessible to the masses, whole new genres of music sprung up that couldn’t have existed without wholesale copying.

Here’s a case study. Drum & bass as a musical genre was, literally, founded on one short sample popularly known as “the Amen Break”, from The Winston’s “Amen, Brother”, an obscure B-side that contained a six-second drum break that would go on to change the face of all types of music (jump to 1:26 to hear it):

Here’s one of the most famous examples of that sample being used, slowed down to a hip hop tempo:

Indeed, once you know that break, you spot it bloody everywhere. Check out the build from around 0:30 in this recent chart hit, for a more subtle use of it:

(Want to explore how extensively all forms of popular music today sample all other forms previously? Head over to Who Sampled. Book an afternoon. It’s like crack cocaine to music fans, that site…)

5. It’s easier than ever

Some people bemoan this. They say it’s a bad thing. But they’re wrong. The fact that the path to expressing yourself creatively is now easier to follow than ever, because “everything is out there”, is goooood. As Seth Godin once famously said, true professionals don’t fear amateurs.

Want to play a set like your favourite DJ? Shazam the tracks, buy them, and get practising! No need to spend months tracking down obscure vinyl that take half a year’s salary to afford just to get started.

Want to make a tune in a genre you like? No need to save for years to buy expensive synthesisers, get a degree in sound engineering, go to music school, and become mates with a studio owner who’ll let you mess around. (All of these things are great, by the way – just by no means necessary.)

Instead, head over to Loopmasters or Beatport Sounds or any of the other dozens of big sample companies, buy a promising-sounding sample pack or two for your genre for next to nothing, and get experimenting on your laptop.

In both cases, trust me: Along the way you’ll learn loads and make lots of mistakes, but you’ll be far more likely to finish – putting yourself up there with the minority of DJ/producers who actually finish anything at all rather than just talking about it. You’ll be ready to go right back to ther beginning and start again. Prolific beats perfect. It’s fun! You’re getting there…

Of course, there are pitfalls here. If you copy without a passion for trying to understand what’s going on underneath, you’ll compromise your learning (it’s back to that wanting to know how a car works by taking it apart and putting it back together again argument – that interest in “peeling back the layers” has to be there). If you copy for commercial gain, or to deceive – not cool. That’s just plagiarism/forgery. That’s why copyright laws exist.

But copying as a creative tool? That’s different. If you think of creativity as a chain, passing through time and generations, then to be a link in that chain, you have to copy. It’s almost your obligation to do so. By copying, you’ll inevitably introduce a bit of yourself, and by doing so again and again as you improve as a DJ or producer, you’ll start to develop a style of your own.

And in the future, someone may just use your work as their starting point. Just as those who you’re inspired by did with their forefathers. That’s how creativity works. Embrace it and get making stuff! Copying is cool.

Have you learned about DJing or music productions through copying, using samples, emulating stuff you admire? Let us know your thoughts, advice, and where you think the line should be drawn, in the comments…