The Adam Audio T5V is for the contemporary bedroom DJ/producer who demands high quality monitoring at an amazing value – it blows away active monitor speakers in its price range, and even some older, more expensive models from “prosumer” brands such as M-Audio and KRK. The imaging and detail in the high frequencies are unheard of in this bracket – these simply are the best entry-level monitor speakers you can get for your bedroom studio. Highly recommended.

The Adam Audio T5V is a nearfield monitor speaker for home and bedroom studio use. It’s got a 5” woofer with an Adam Audio-designed “U-Art” 1.9” ribbon tweeter. Adam Audio is known for its legendary X-Art tweeters, such as those found on the A7X monitors, and the U-Art is the company’s latest tweeter for budget monitoring that still employs a ribbon element giving you those signature silky highs that Adam Audio is known for. 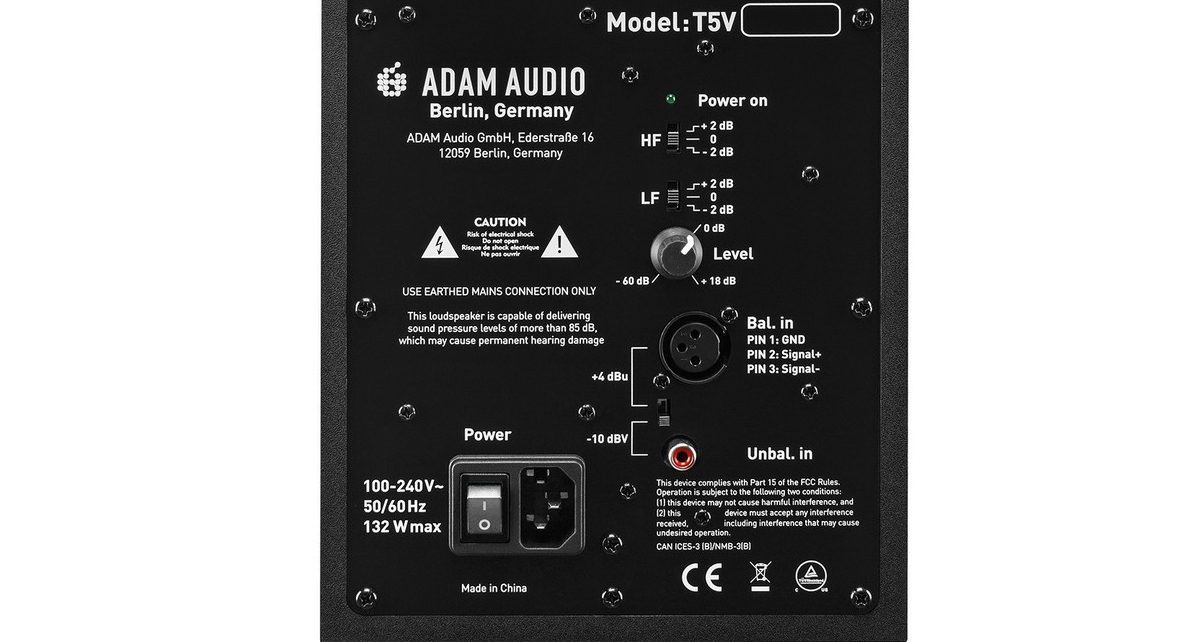 The rear has RCA unbalanced and XLR balnaced inputs, a level control, high frequency and low frequency boost and cut switches for tuning to your room, a power switch and a three-prong IEC socket.

Let’s get the good stuff out of the way: the T5V’s sound amazing, especially given its price and size. I’ve got them placed in my bedroom on top of my desk, and they are an absolute joy to listen to: The highs are detailed and crisp without being fatiguing, the mids are clear, and the lows are just enough to get by for bedroom productions. If you need more “oomph”, you can pick up a companion Adam Audio subwoofer such as the Sub7 (which we hope to review as well).

My room is tiny by the way at around 10sqm and the T5Vs give me more than enough power – I can monitor at relatively low levels to hear if my mix is packing the right amount of energy and excitement, and I can turn them up when I want to look for details or if I want to spot playback inconsistencies. I can imagine that these would be perfect for the bedroom DJ/producer who lives in a studio apartment or maybe a single bedroom condominium – it sounds good at both low and loud volume levels, especially the treble frequencies.

If you’ve got a bigger room you may want to check out the bigger T7V model which packs a 7” woofer, but for most tiny bedrooms (and tiny houses, if you’re into that movement) the T5V is more than enough.

Even the largest recording studios in the world with monitors that cost hundreds of thousands of dollars always have an alternate pair of speakers to check their mix on (usually a Yamaha NS10). If you already own a favourite pair of monitors, adding the T5Vs and checking you mix on them is an excellent way to cross-reference the tune that you’re working on because it gives you a different high-quality “look” which complements your monitoring palette that should also include “low-quality” or consumer playback devices like smartphones, tablets and laptop speakers.

I wrote a few tunes using these monitors and checked mixes from my main studio – I use a pair of Focal Twin 6Be’s, which are professional studio monitors that cost US$2000 a piece. I also work with Barefoot Micromain 27s, which are top shelf monitors used by legendary producers like Butch Vig and are even more expensive than the Focal Twins – I love them, but I don’t think I’d like to sell any more body parts just to buy them.

Now I was happy with how the T5Vs sounded during the production process, but I was even more satisfied at how they performed as an alternate pair of monitors to check your mix: the T5V tends to favour the high frequencies (thanks to its proprietary U-Art tweeters no doubt) so I was able to peel back some layers in the highs that I hadn’t been able to focus on while mixing on my larger Focal Twin monitors.

The Adam Audio T5V is for the contemporary bedroom DJ/producer who demands high quality monitoring at an amazing value – it blows away active monitor speakers in its price range, and even some older, more expensive models from prosumer brands such as M-Audio and KRK. The imaging is excellent given the size and the price – details in the high frequencies pop out thanks to the proprietary tweeters that Adam Audio is famous for (though they’re not the same as the revered X-Art tweeters found on higher end models, the cheapest of which clocks in at three times the price). The sound is also fantastic, again given the price (can’t state that enough) and it tends to fall on the brighter side of monitor speakers, which isn’t a bad thing at all.

Gear for home studios has improved in leaps and bounds from when DAWs entered the market in the 90s, and Adam Audio’s latest monitors are proof that these days, you don’t have to blow huge amounts of cash to get great sound in your bedroom. When I started a project fstudio back in the early 2000s I had to spring for a pair of M-Audio BX8A speakers that cost twice as much, and they don’t even sound as detailed as these speakers.

At this price, they’re a steal and we can’t recommend these enough whether you’re just starting out making music at home or you’re an intermediate DJ/producer looking to “kit up” your project studio.

I haven’t given a five-star rating for anything yet this year, but I’d give this one a six if I could. Skip the KRK Rokits, M-Audios and Mackies – save up a bit more and go straight to these. You won’t regret it, I promise. Highly recommended.