The Hercules DJControl Starlight is a compact two-channel device meant to be used with Serato DJ Lite. It looks similar to the Numark DJ2GO2, except that it’s got touch-sensitive jogwheels that you can use for scratching. It also has lights going around the base of the unit that can sync with the music you’re playing. It’s fun, cheap, and portable – though aimed at super-casual DJs, even more experienced DJs may want to check it out and keep it as a backup or something to take long with them on holidays.

Today’s DJ controller market has more variety than ever before. While much of the attention is given to the big flagship controllers with their expansive features and often high price tag, it’s worth taking a look at what a small and more budget-friendly controller can offer, both to beginners and experienced digital DJs.

The Hercules DJControl Starlight controller is one such controller. It’s a compact two-channel device that features touch-sensitive jogwheels, four performance pads for each deck, knobs to control low EQ or a high-pass low-pass filter, and works plug-and-play with Serato DJ Lite. It’s built mainly of plastic, so the controller is lightweight but likely not as durable as more premium controllers – keep it safe in a case or in your DJ bag.

Though aimed at beginners, experienced DJs may find that this compact controller can be handy as a backup. Since it is powered via USB, it could easily be used while on a plane or train, to practise a set or record a mix. For DJs who work in venues with limited space in the DJ booth, this small controller can be a big help. 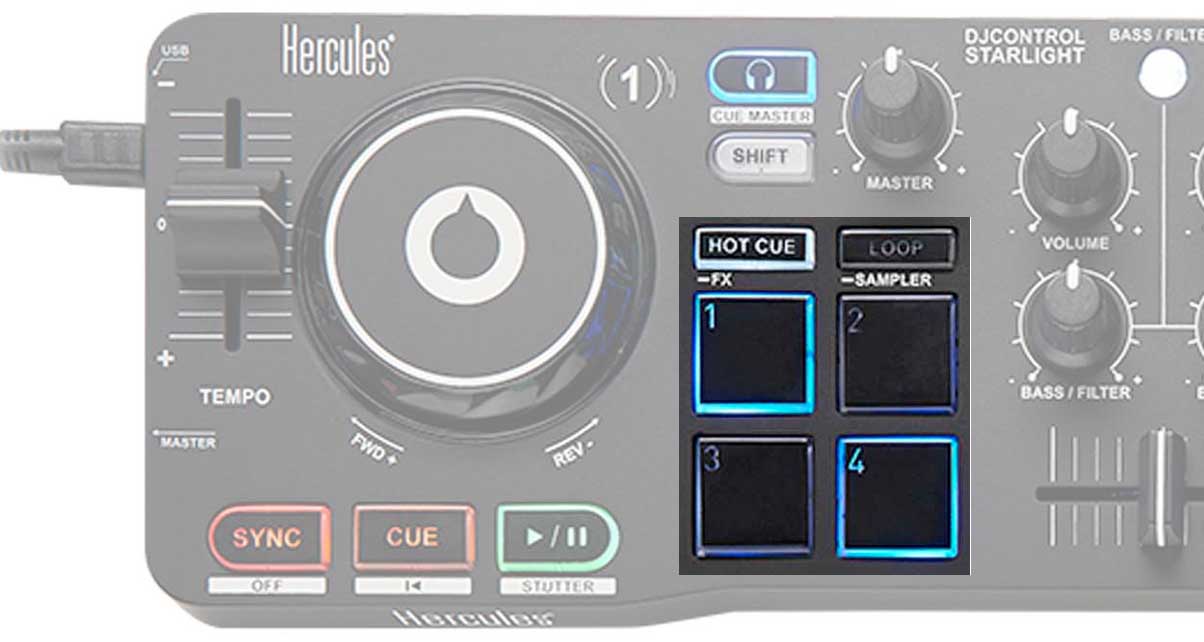 The buttons and knobs on this controller, also made of plastic, have a decent tactile feel, but they are surprisingly stiff. You’ll have to hit the buttons with considerable force for them to register, and they make an audible clicky sound when pressed. 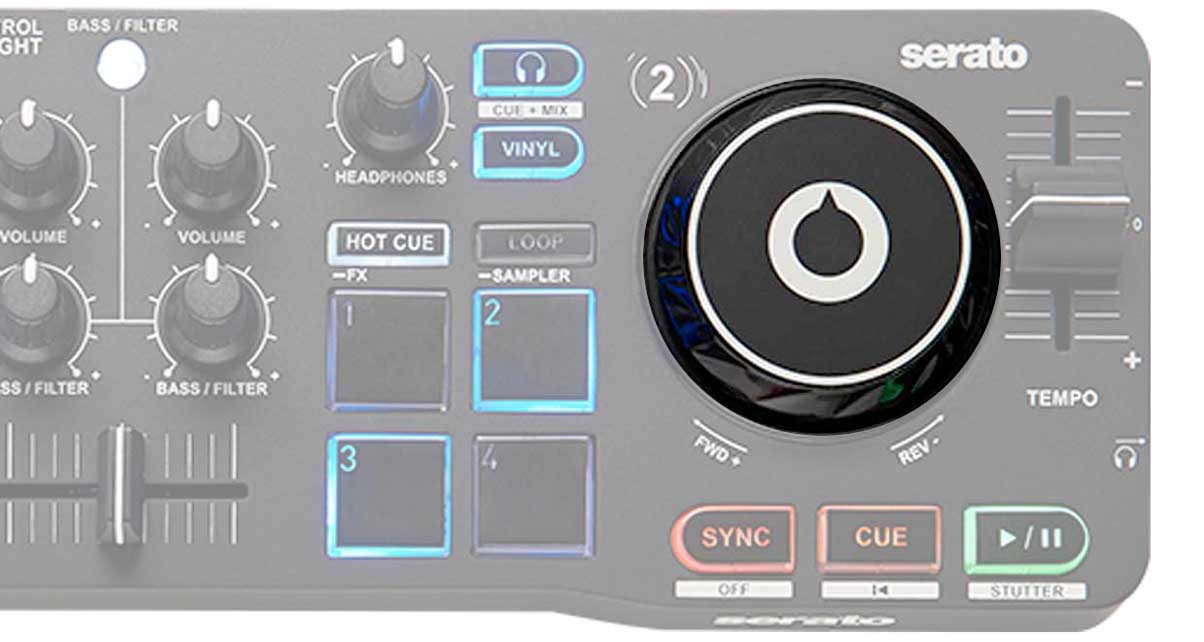 The jogwheels respond well, both in beatmatching mode and in vinyl mode. Below them are transport controls, and next to those are the performance pads. The pads have four modes – Hot Cue, Loop, FX, and Sampler. They work similarly to other controllers, though Loop mode will only give you 1, 2, 4, or 8 beat options, and in FX mode, the pads must be held down to activate the effect.

In Sampler mode, volume control must be down within the Serato DJ software. The same applies to track selection and loading to decks; there are no controls for this on the controller.

The centre of the controller contains knobs for channel volumes, and a combination low EQ and high-pass low-pass filter. A button at the top of the controller lets you switch between the two functions. There is also a master output volume knob, and a headphones volume knob, along with buttons for cueing your channels or the master mix. 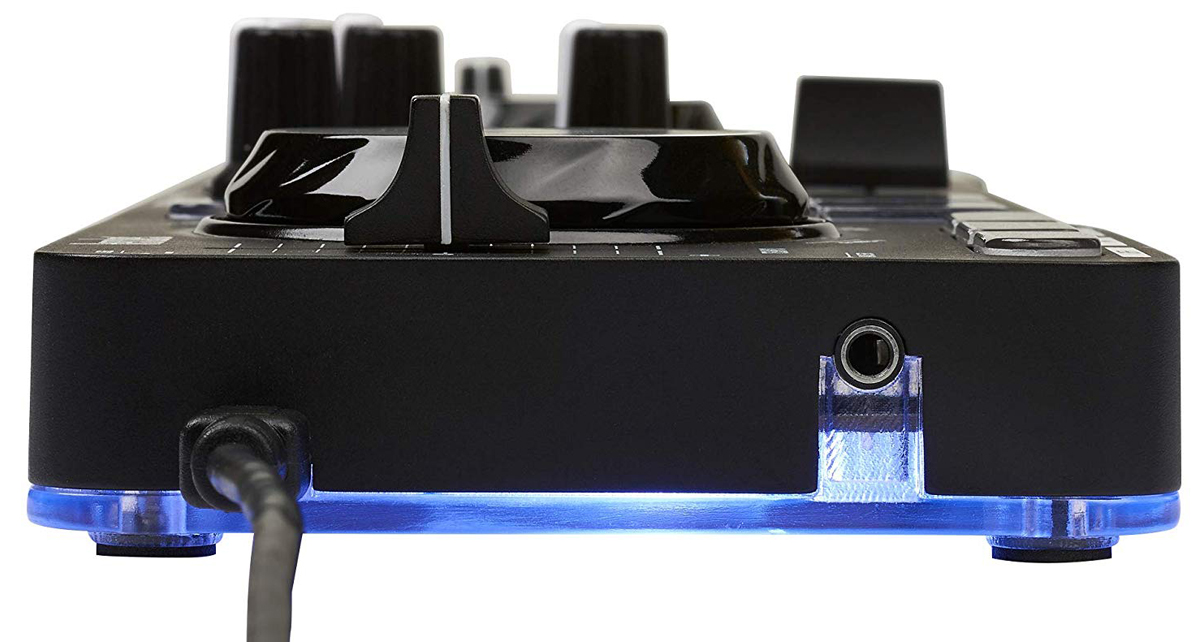 In terms of connectivity, the Hercules DJControl Starlight keeps it simple. There is one master output via a 1/8” stereo jack, one headphones output also via a 1/8” stereo jack, and a mini-USB port for connecting to your laptop. There is no microphone input for this controller, or the ability to connect an external input. Most DJs will need to use some type of converter cable (example: an 1/8” to RCA cable) to connect the controller’s output to a PA or club mixer.

There’s one fun and flashy feature to this controller. The underside contains several multicolour LEDs that shine through the translucent plastic bottom of the controller. These LEDs will react to your music in a variety of ways that can be set in Serato DJ Lite’s preferences. They can flash to the beat, reflect the master volume, match the track’s waveform colours, or can be turned off altogether.

The DJControl Starlight works with Serato DJ Lite right out of the box, and it will also work with Serato DJ Pro if you have the licence. Apart from Serato, it can also be used with other DJ software including Virtual DJ and Algoriddim’s djay Pro.

Though it may be smaller and less feature-rich than more expensive DJ controllers, the Hercules DJControl Starlight delivers a surprising amount of power for only US$80, and can be a great tool for both first-time and veteran DJs.