If you’re looking for a budget way to get into digital DJing, you now have the Vestax Typhoon controller to add to your shortlist. It has a soundcard built-in, saving you the need to buy a DJ soundcard separately – unlike some other DJ controllers like Vestax’s own VCI-100 and the cheaper Numark Mixtrack.

This means you just need a hi-fi, some powered speakers (such as good computer speakers) or another way of playing the music, plus a pair of headphones, and you’re off. There’s a microphone socket too for you budding mobile jocks.

It is heavily related to the Vestax Spin, however, the latter is Mac-only, while this is for PC (including 64-bit for Vista and Windows 7, but not AMD) and Mac. Furthermore, the Spin only controls Algoriddim’s djay software (that integrates tightly with iTunes) while this controls industry-standard Traktor. As such, this is less of a niche product.

The Vestax Typhoon takes its power from the computer, so no need for a power supply in the vast majority of cases. For both the PC (with drivers supplied) and Mac (no drivers necessary), it is a plug-and-play device, coming with Traktor LE (a cut-down version of the industry-standard DJ software), a USB cable and some quick start instruction. Setup is therefore devilishly easy.

It is a funky red and black colour with brushed metal jogwheels, which seems to have divided opinion out there; I think it looks pretty good, but it’s a personal taste of course.

You’ll be using the jogwheels a lot with this unit, and I’m pleased to say they’re high-quality, sharing the same functionality as with Vestax’s other DJ controllers. If you touch the metal part of the wheel, it is as if you are touching and holding a record on a normal turntable – the music stops. Then you can move the wheel backwards and forwards to adjust where you are in the song – a “scratch”.

If you touch the jogwheels at the edge, they instead act as if you’re slightly slowing down or speeding up the playing song, depending again on whether you move in a clockwise or anti-clockwise direction. Thus the jogwheels cleverly serve two functions, and this is a big plus of all Vestax controllers over the competition. It’s worth bearing in mind that with this unit pro “scratching” is hard due to it’s not being instantaneous (unlike the more expensive VCI-300 for instance), but this is not going to be an issue for most mixing DJs. Turntablists should look elsewhere, though.


Each deck (the controller is divided right down the middle apart from the effects and output adjust controls, the left-hand side controlling the left deck and the right-hand side controlling the right deck) has a big play button, a cue button (to set where you wish to start play from) and a cup button (to take the song back to the cue point). With these three controls and the addition of the shift control to double up functionality, you can accurately set up tunes ready for play, skip through them, start them easily and return to the start for whatever reason from there on in.

Vestax has included a Sync button on each deck to quickly get songs to the same speed, and also two controls to nudge the record in the same way as I just described with the jogwheels, to speed things up or slow them down. These are presumably there because you can also use the jogwheels to control one of the built-in effects, a “filter”, and thus will need another way to speed up and slow down tunes when the jogwheel is assigned this way.

Built-in filters add to the fun

Here’s how the filter works: Hitting the filter button on the deck that’s playing and moving the jogwheel left or right will progressively introduce a high-pass or a low-pass filter. It’s a classic DJ effect and one you’ll recognise instantly if you’re not sure what it is. Trust me that it’s great to have it on a DJ controller.

The crossfader is good, the tempo faders are short-throw (ie hard to adjust very accurately) but good quality and the other knobs and faders are also of a quality that’s higher than you may imagine. While it’s non-standard to have faders rather than knobs for low, mid and high to adjust the EQ on the decks, they work well, cutting the frequency 100% at their lowest throw.

The addition of the ability to control an extra effect chosen within Traktor and a loop (the length of which is adjustable by halving or doubling it with +/- buttons) mean that even though this is a fairly simple controller, there are some bells and whistles to keep you happy once you’ve mastered its basic functions.

Navigate around your music from the controller itself

For navigating around your music collection, there is a good browse control, letting you select the song list in Traktor and scroll through your tunes until you find the one you wish to load; you then push left or right to load it onto the left or right deck respectively.

This is nice because it means you don’t have to fiddle with your laptop in front of a crowd, as you’re able to do most adjustments on the console in front of you instead.

As mentioned at the start, the software is a cut-down version of Traktor called Traktor LE. Traktor is industry-standard and its main competitors are Virtual DJ (often seen as more entry-level software but nevertheless capable and popular), and Serato ITCH (stylish software that only works with certain pro controllers and thus is aimed at the higher end of the market).

People tend to get used to one of the three and then resist change, and Traktor is fine, although personally, I’m a bigger fan of the other two because I prefer the way they visually represent music on the screen. You’ll be fine learning with Traktor, though, and as I say it is industry-standard so you’ll be in good company. Bear in mind that as time goes on, you may well wish to upgrade to a full, paid-for version of the software; you can’t easily record your mixes and the effects are limited on the LE version, to give two obvious limitations.

(It’s also worth bearing in mind that judging from the Virtual DJ forums, it is possible to set this unit up to control that software as well, so it seems that should you decide you wish to use that instead, it may not be a problem.)

This is a capable and well thought-out unit that should serve beginning, occasional or home DJs well. The controls are all good, although the overall construction is befitting of its price-point, is basically plastic. Thus you wouldn’t expect the Typhoon to stand up to the rigours of life on the road – although a flight case would prolong its life were it to be used in this capacity.

Its competitors in the Traktor controller market are the new Numark Mixtrack (still cheaper even once you’ve bought a soundcard for it) and Vestax’s own VCI-100 (but this works our considerably more expensive as you need a soundcard too. It is pro gear, though). In the Virtual DJ arena the main competitor that springs to mind is the Hercules RMX, which is a well-built (although clunky) controller that has many fans.

For US$196 all-in, the Typhoon is undeniably good value, and for its intended users, it fits the bill admirably. Just don’t expect to be able to scratch like a pro on it – that’s a skill and a capability for top-end DJs using top-end kit – and don’t drop it.

Are you looking for a controller but can’t make your mind up? Are you a Vestax Typhoon owner who’d like to add your experiences to this review? Please feel free to do so in the comments section below. 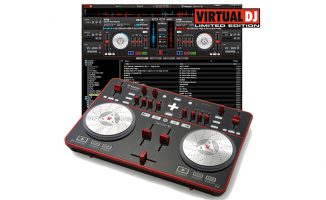 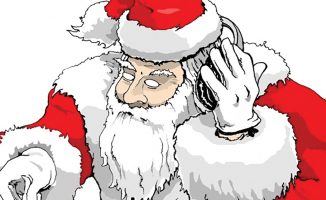 A Parent's Guide to Buying Digital DJ Gear For Teenagers