This is the third part of a fortnightly guest series by Chris Cartledge of ohdratdigital.com

So, we’re here. To learn to beatmatch or not to learn to beatmatch… well, as this series is all about skills you don’t have to learn, but really should, we’re assuming you’re still reading this because you’re one of those who wants to! Because while taken totally at face value, beatmatching is an artless task, the understanding required to perform a beatmatch manually is invaluable. What follows is a beginner’s guide to beatmatching, and why it’s a good idea to learn; there’s an eight-part guide to performing your first beatmatch, and three further expert tips to make it easier for you…

Why learn the hard way at all?

You might have dipped your toes before but the safety of the sync button was too great a lure. So before we proceed, let’s remind ourselves why it’s a good idea to learn to beatmatch. The most obvious reason is that software is not always right. Plain and simple, BPM counters make mistakes, transients are misread, and of course sometimes things don’t even operate in the same way on other equipment. Using sync is fine, but you need a backup.

Another reason is much more to do with your connection to your music. It may sound a bit artsy, but the more you “bond” with your music and methods, the better a DJ you will become.

There’s no getting around it – understanding the musical theory underneath beats and bars is going to help you with beatmatching. However, actually doing it is the most important thing – so please read the following, but if you struggle, move on to the steps below and have a go. These words will still be here later…

Our inference of the rhythm of a piece of music is referred to as its “metre”. A slightly more involved and encompassing concept than merely the time signature of a piece, it also refers to the way that notes within a piece are stressed and syncopated and otherwise fall on the musical timeline. To make matters more complicated, the metre – certainly the time signature – doesn’t need to match exactly for a successful mix to take place, but the two tracks will need to have a common denominator, so to speak.

Time signature is an oft misunderstood principle, but can be described fairly simply: the top number is how many beats a bar comprises, the bottom how a “note” is divided to create a single beat. A note is a musical constant and it’s a good idea to learn an ounce of musical theory to help you to understand a little better, although it’s not a necessity to do so.

The most important thing to understand is that the relationship between the amount of beats in a bar and how long those beats are creates both a natural tempo and rhythm – we think of tempo in beats per minute, so each bar in a song in 3/4 will be 25% shorter than a bar in 4/4, which has the effect of making the song sound more flighty at the same BPM. If we were to drop the tempo of the 3/4 track by 25%, it would fit into the phrasing of the 4/4 track.

The rhythmical aspect of the metre has the last word in any beat match, though, and if beats in two songs are heavily “swung” so that they fall ahead and behind a beat then they may not glue together tightly. Strictly speaking, electronic music, especially “four on the floor” dance music (music driven by a “dumph dumph dumph dumph” kick pattern) is the most cohesive musical style, tends to match fairly consistently, and is almost always in 4/4 at a static tempo.

Live recorded music such as rock is entirely the opposite, and will usually have a drifting tempo, swing and looseness to the rhythm, and is more likely to be in a different time signature.

So: time to practice. Don’t worry if you feel shaky on some of the principles explained above – learning by doing will help a great deal, and you’ll begin to pick things up in no time.

I have an eight-part set of instructions followed by three expert tips that will get you up to speed as quickly as possible – but the funny thing about beatmatching is that our brains aren’t really wired for it; without a hefty amount of practice, your grey matter simply won’t be able to discern two tracks simultaneously as separate entities. So let’s start getting that practice…

Eight steps to performing a beatmatch

It’s a bit like riding a bicycle – as soon as it clicks, it’s very difficult to put into words why you couldn’t do it before. Follow these eight instructions, though, and you’ll be pulling wheelies in no time.

Pulling it all together
As you get more confident, you will start to notice that you can think about more and more of track B rather than just a single sound in it. Eventually you will be able to discern the song in its entirety, and when you can combine that skill with on the fly adjustments to the playhead on track B you will be able to make very quick beatmatches.

The above is not easy, nor is it ever going to be – it’s a rite of passage, which is one of the reasons why so many old school DJs get hot under the collar around sync-button lovin’ digital jocks. However, here are three sage tips that will help you to get better, faster:

Next in the series, we’ll be looking at manual cueing and scratch techniques – things that you may miss out on if you rely on button pressing, but that can go along way to giving your performance extra sparkle. 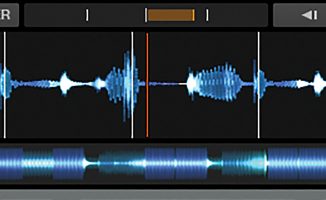 Over To You: Is It OK To Beatmatch Using Phase Meters?